Confidence inspiring. If I had to sum up the Toro from Zet Kayaks in two words, that would be it.

When the brand new Toro was delivered to my front door there was still two feet of snow on the ground and the ice was clear on only a few of my local runs. Paddling a new boat on icy-cold rivers with rusty skills and kayak-muscles not yet awoken from winter hibernation. What could go wrong? Apparently, nothing.

Czech kayak producer Zelezny, whitewater extreme racer Honza Lasko and slalom champion Viktor Legat founded Zet in 2007. Based in Prague, Zet is well established in Europe but only expanded online distribution to North America three years ago. There are four boats in their current lineup—all creekboats that can also be used as all around river runners. Zet tells us the Toro is designed to perform as everything from an entry-level river runner to an extreme creek racer. 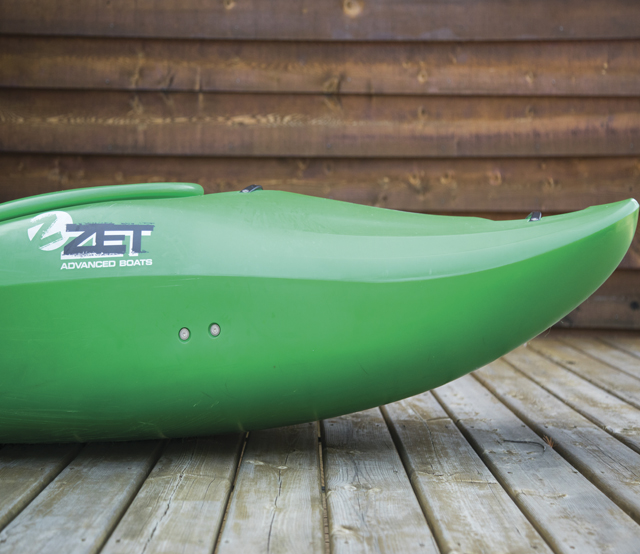 The Toro’s bow narrows noticeably along its length towards the tip; Zet designed this narrowing beginning at the hip and ending just past the knees to offer enough space for quick paddle commands.

The seat in the Toro is a pre-shaped closed-cell foam affair that is fastened to a diamond-shaped plastic structure, which fits snugly under the bow and stern foam pillars. This seat structure is no doubt designed to provide support to the hull over years of abuse. The hip pads are attatched to adjustable plastic plates that are attached with hex bolts through the cockpit rim and into the sides of the seat. It’s solid and less complicated than it sounds. Zet claims there is eight centimeters of fore and aft seat adjustment but we couldn’t figure it out and left it as it came. The included hex wrench stored behind the seat is a nice touch. Because the actual seat part is closed-cell foam, it’s warm and won’t water sponge. The backband works well and adjusts with ratchets just around the well-shaped foam thigh hooks—adjustable forward and back and angled with the hex wrench. This is a set it and forget it type cockpit.

I’m five foot ten, 175 pounds and a have a 32-inch inseam. The 270-centimeter boat—the only size it comes in—fits me well. This makes sense as Zet says the Toro is ideal for a paddler between 145 to 210 pounds. I was snug in the hip pads without any shims, the foot braces were in the third last hole and the thigh hooks were all the way forward.

Zet designed the Toro with a displacement style hull, continuous rocker from bow to stern and edges only on the rear half of the kayak. The Toro accelerates quickly and tracks like a dream. With no edges on the bow there’s nothing for the water to grab to mess with your ferry angle, or squirrel you about paddling through boils. Yet the edges on the stern were just enough to be able to carve on a wave, hold a jet ferry and maintain a line when punching through a hole.

My favorite part about the Toro is also my least favorite part. The lack of edges on the bow that make maintaining a ferry angle and holding a line through a rapid so easy also make catching eddies and carving turns a bit more work. 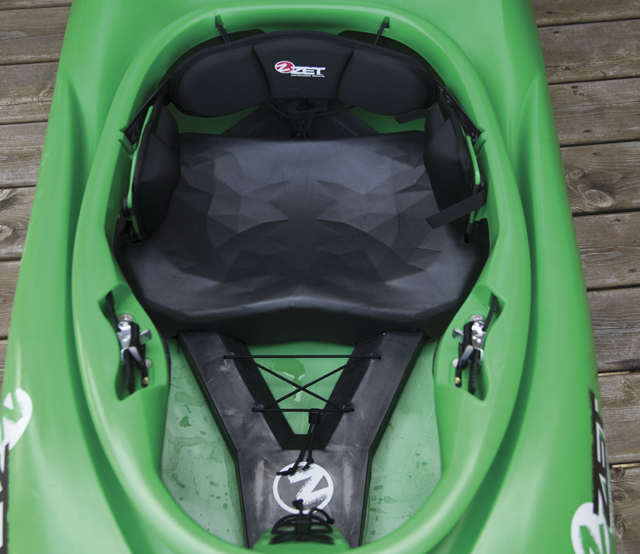 The seat has approximately eight centimeters of fore and aft adjustment using two hex bolts concealed behind the hip pads. Constructed of closed cell foam, the sturdy and simple seat is designed to resist water sponging.

For my paddling style I prefer planing hull style creekers—like the Dagger Mamba—with harder edges on the bow, which means dropping edge and leaning forward to let the boat pivot you into the eddy. In the Toro I found I had to really lean back to engage the edges and perform more of a backwards sweep to bring the boat around. This made catching mid-river micro-eddies more challenging. Without much in the way of an edge to carve a turn on, more application of muscle power for finer course adjustments was required. Planing hull creek boats with more aggressive edges allow for the boat to be turned simply by tilting it over. With some forward speed the boat will turn and carve just like a pair of skis. Displacement hull creekers, or boats with less aggressive edges like the Toro require more of a stop, pivot and go approach.

At 8’10” the Toro is approximately the same length as a large Jackson Kayak Zen or a Liquidlogic Flying Squirrel 85. It was fairly fast compared to my previous creeker, the Dagger Mamba 8.6, but not as fast as my Pyranha 9R. I suspect this is due to the ample bow and stern rocker keeping the overall waterline length shorter than some of the aforementioned

aggressive racing designs, which also means greater maneuvrability. I found this to be especially true while being able to change direction mid-rapid and accelerate around features very smoothly.

Whenever the bow rocker was insufficient to climb over a feature, the tapered bow and curved deck allowed me to easily punch through and surface quickly without losing too much speed. Despite its length, the ample stern rocker made boofing easy and stomping a drop gentle on my spine. At 27 inches wide the Toro is similar in width if not slightly wider to many other creekers and river runners on the market. I found it to be very stable and I even managed to keep my hair dry almost all weekend.

The Toro was a great fit for early season, high water runs. I also felt pretty special being the only paddler in a Zet kayak on the river. As their online distribution expands in North America, I don’t expect that to last long.

Know Before You Buy: What Are The Different Types of Kayaks?