An in-depth review of the portable Oru Kayak by Adventure Kayak magazine.

In late 2012, when California architect and designer Anton Willis and partner Ardy Sobhani launched a Kickstarter campaign to crowd-fund production of the Oru—an origami-inspired folding kayak Willis had designed as a hobby—they pre-sold more than 500 boats, raising over $440,000. The pair promptly built a factory near San Francisco Bay and started cranking out kayaks.

Each kayak is engineered from a single sheet of light yet strong corrugated plastic—which Oru claims is rated to 20,000 fold cycles—that is scored to allow it to fold into a 30-inch-square, briefcase-shaped package. It’s not a boat in a box; the boat is the box—the lid of the case becomes the reinforced floor of the kayak. A single rubberized seam along the deck is joined by a series of clips; neoprene bow and stern sleeves complete the watertight seal.

The Oru kayak’s simplicity belies the elbow grease needed to manipulate plastic signboard into a sturdy, rigid 12-foot kayak. Unfolding and refolding the kayak is much easier with two people and, with practice, takes less than 10 minutes. I struggled and swore for twice that before grabbing a helper.

With its semi-translucent white hull, acute angles and hard chines, the Oru evokes its traditional skin-on-frame roots. Edging is stable and responsive for carved turns. A full bow aids capable rough water handling and even surfing. It tracks well and feels agile in the water, accelerating quickly and cruising at a speed comparable to similarly sized hard-shells.

The foam seat and adjustable-height backrest are comfortable enough, and the floating foot bar offers adequate support for efficient leg drive. The cockpit opening accepts a standard-sized spray deck, although there’s not much below the rim to brace knees and thighs. 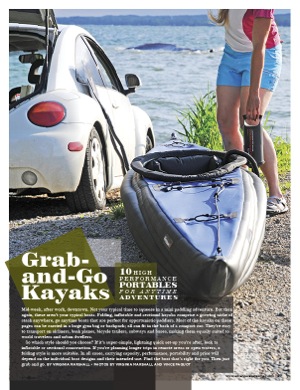