Why This Is The Toughest Paddling Race Ever

This is not your traditional marathon event. In the toughest single-day expedition paddling race in the world, canoes, kayaks and paddleboards traverse two rivers systems, three lakes and 20 portages. It’s a total of 130 kilometers in less than 24 hours. No assistance, no support and no mercy. Each year more than a third of teams drop out. British adventurer Richard Harpham takes on the challenge.

I’m no stranger to long distance canoe and kayak racing. I’ve weathered the 715-kilometer Yukon River Quest and the so-called “Everest” of paddling races, the Devizes to Westminster International Canoe Race. Yet, even with those exploits behind me, the Muskoka River X—heralded as the toughest single day canoe race in the world—caught my eye.

I picked Hap Wilson for my paddling partner. Hap’s reputation precedes him. The Canadian paddling icon is known for his work as an environmentalist and author of multiple canoeing guidebooks. He’s even written a guidebook on the Muskoka River system we would be paddling. No question, he seemed like the ideal partner.

Hap set the tone of our partnership at the outset with a brief email: “One warning about the race,” he wrote. “I’m a canoe tripper, not a racer. So I hope you aren’t disappointed.” 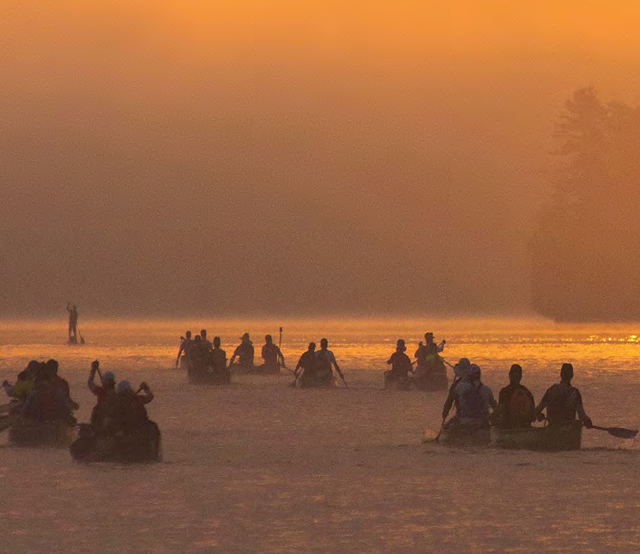 Go time on fairy lake at 7:07am. Photo by Randy Mitson

While Hap is a veteran of the Muskoka River X and always places respectably, he’s never won. Stopping for a pot of coffee or a picnic dinner and a little blues on the harmonica are par for the course when racing with Hap.

With this in mind, at least I wasn’t nervous about traveling from my home in Bedford, England, to spend what could have been 24 stressful hours in a canoe with a complete stranger. Hap’s kind of racing seemed positively civilized. It wasn’t long before we’d nicknamed ourselves the Gentlemen Racers. Cuppa tea, anyone?

I meet Hap in the parking lot of Algonquin Outfitters’ retail shop in Dwight, Ontario. We were there to pick up our loaner race vessel and have just an hour-long warmup session together paddling from Oxtongue Lake to Ragged Falls at the edge of Algonquin Park. With tens of thousands of miles of paddling behind both of us, it’s easy to find our rhythm on the water.

We are paddling a brand-new, 18.5-foot carbon-fiber Keewaydin cruiser by Swift Canoe. The carbon-Kevlar trim is gorgeous. The contoured carbon yoke would turn out to be a gift on the portages. And though the Keewaydin isn’t a racing canoe, it would keep pace with speedier designs and overtake plenty of canoes.

Some might argue our short and leisurely five-kilometer warm-up wasn’t ideal preparation for a 130-kilometer race with 20 challenging portages, exposed lakes and swift rivers. However, it cements our deep friendship, built on kindred spirits and a love of the outdoors. We are ready. 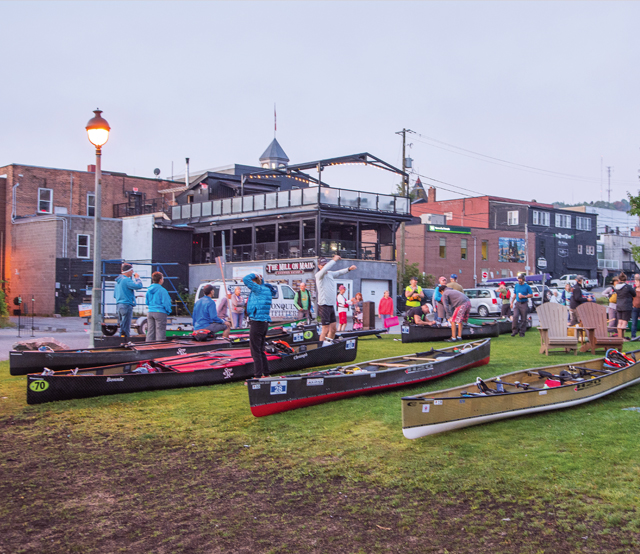 At the pre-race briefing the evening before the race, we go over route maps for the loop course that will take us from Huntsville to Baysville to Bracebridge and back. There’s also a mandatory gear check. Paddlers must be completely self-reliant for the duration of the race. Each team is required to carry sleeping bags, a tent, water purifier, extra clothes and food for 24 hours or more. They also need to bring a map and compass to navigate, as there are no markers on route.

I notice we have more than the essentials. A tripper to the core, Hap is one of few to race with a 60-liter food barrel and the target of some good-natured ribbing for it. The barrel is where we’ll be storing our cooking kit.

Who Competes In This Paddling Race?

Paddlers from ages 15 to 74 have competed in the Muskoka River X. In five years, the event has grown, hosting 72 racers the first year and 116 in 2017. It’s also grown into a series, including the 40-kilometer Big East River X and new Hours of River X, which challenges teams to paddle as far as they can in 24 hours. Those new events join Ontario’s already vibrant marathon racing scene which hosts the famous 200-kilometer K2O event, the Mattawa River Canoe Race and dozens more around the province.

While there’s no shortage of opportunity for challenge, the original Muskoka River X remains special because it appeals to a wider audience than the traditional marathon crowd. 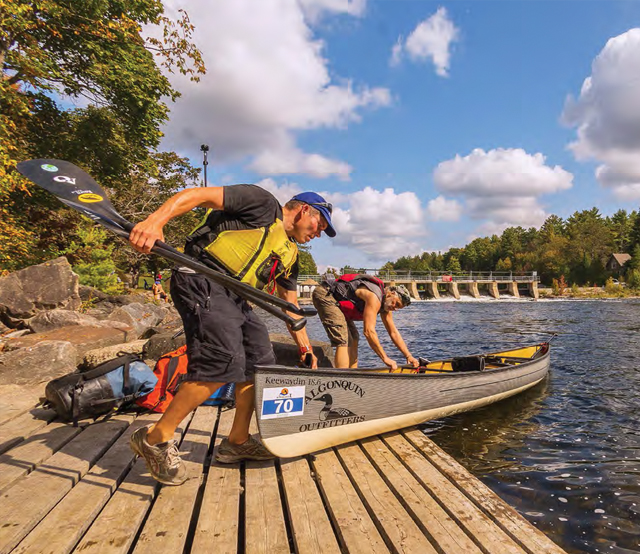 Portage one of 20. Photo by Randy Mitson.

“Marathon canoeing used to be a very small community,” says race co-founder Rob Horton. “It’s growing. The Muskoka River X has lured in a lot of trippers to see if it’s something they’re capable of.”

Each year between 30 and 40 percent of paddlers do not finish. Exhaustion and not making checkpoints within the time limits are the most common causes.

Horton and business parter Mike Varieur both come from an adventure racing background. “We wanted to put on a paddling race on a larger scale than had ever been done in Ontario—the Muskoka River X was the result,” says Horton.

The Muskoka region is perfect because of its accessible wilderness. On the surface this is quintessentialcottage country, with cabins and Muskoka chairs lining the shore, but its history runs deep. Long before the courier de bois and David Thompson used these routes to navigate west, it was the hunting grounds of the First Nations. More recently, it was a mecca for 20th century log drivers who shipped giant pine south. For those in less of a hurry than Hap and I, there is history to be found on the shorelines, including mooring anchors in rock, and felled trees beneath clear waters. 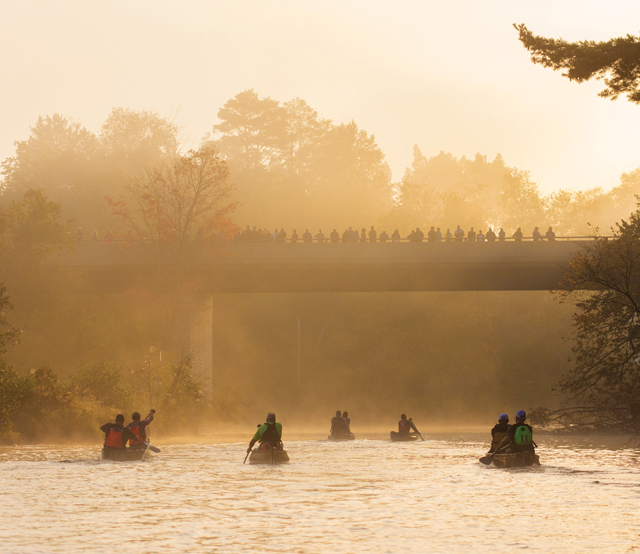 “Looking good!” “You got this! Keep it going! Keep it strong! You’re killing it!” Photo: Randy Mitson.

I have a love and hate relationship with racing. I love the endurance and physical nature of it, testing myself in tough and beautiful environments. The hate side usually builds towards the start of the race as I wonder why I have once more stepped into the breach.

These thoughts go through my head on race day in the pre-dawn light at Fairy Lake in Huntsville. The shore is an explosion of brightly colored drybags, Spandex and race boats and boards. Racers are busy making last-minute preparations—pocketing extra snacks, hugging loved ones and checking gear one last time.

Though there are smiles, I can feel the pre-race jitters. Nerves have me pacing. It’s a relief when organizers say it is time to get on the water.

The start line is surreal. Paddlers and boats are silhouetted like spectral forms against a full spectrum of golden shades from the waking sun. 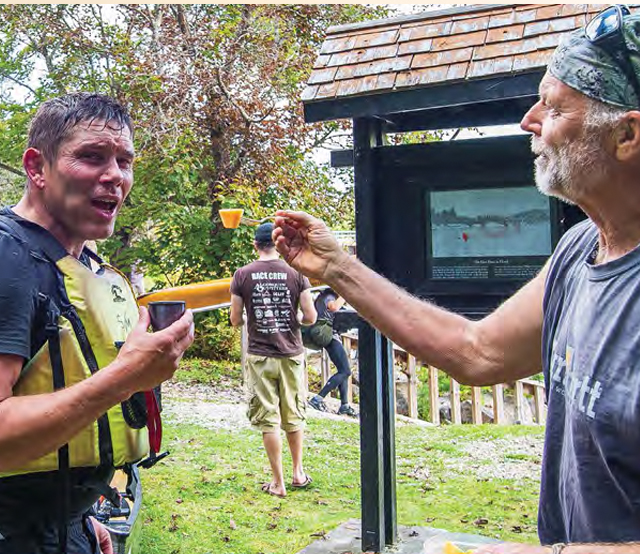 The air horn brings us back to business. Canoes, kayaks and paddleboards lunge forward. The air is electric with shouts from anxious racers.

Once out of the narrow channel the fleet begins to spread out and we settle into a racing rhythm. My strong, short racing strokes are matched by Hap in the stern—though I tease him about not really knowing what he is doing back there.

“I’m pretty sure you’re paddling one-handed and reading the paper,” I say.

When we pass other teams I treat them to my best BBC impression.

“Good morning…And the time is 8:15 a.m.,” I might say as we grunt past. It’s the jokes, small talk and words of encouragement keeping us going for the next 125 kilometers. 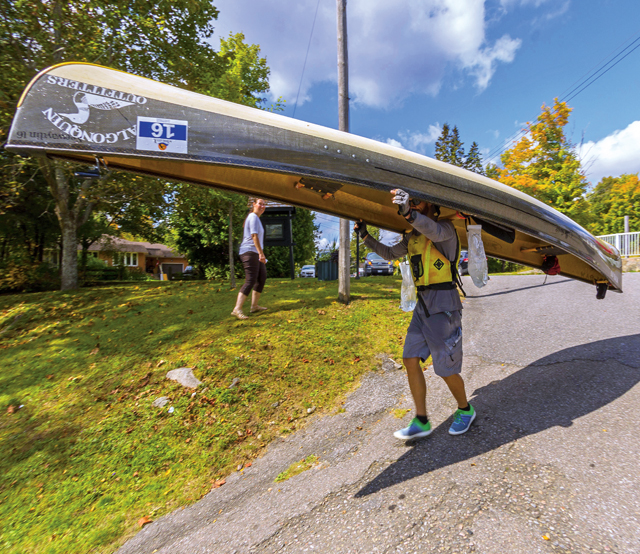 The first portage at the end of the lake is a true baptism of fire—1,700 meters long, traveling up and over a gnarly hill. Huffing and puffing we power up the incline with bags, barrel and the canoe bouncing on shoulders and backs.

With 20 portages en route, we eventually develop a routine and become a finely tuned portaging machine. Accessing the canoe is tricky at many portages, with rocks and flow adding to the challenge. I honor Hap’s wish to keep his feet dry and help him to land.

We were lucky to be experiencing warmer than normal temperatures. Everyone is in T-shirts and glorious sunshine bathes the racers and the early autumn leaves.

In years past, hypothermia has been a problem for some racers, especially at night when temperatures dropped below freezing.

We count ourselves lucky to be sweating instead of shivering and press on. 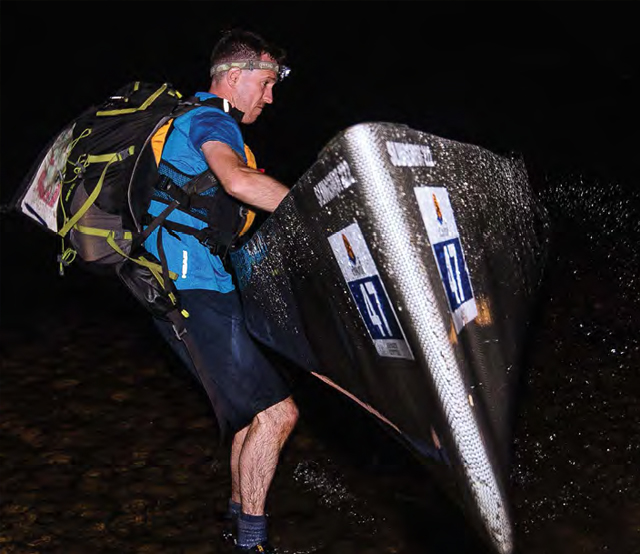 Near dusk, as we reach the 80-kilometer mark at the town of Bracebridge, it seems we are on the homeward leg. We make a big right turn to head back north towards Huntsville and suddenly the river is against us.

Our conveyor belt of water is cruelly reversed. Paddling upstream in the dark is thankless work. It’s hard to get perspective on distance traveled in the inky blackness. It feels like too much effort for not much gain. And mistakes can happen. In fast and shallow section I crack my paddle on a rock. “It’s about as much use as an ashtray on a motorbike now,” I called back to Hap.

Hap, however, was in no mood for surrender.

“Paddle, paddle harder!” came the shout. I try, one hand holding the cracked shaft and digging deep. We are losing ground. We hit an eddy and liberate the spare paddle.

Shortly after we decide it’s time for some coffee and noodles. We fire up the stove and enjoy a night time picnic, complete with cheese and crackers. Though it might not have met race priorities, it’s one of the most enjoyable 45-minute pit stops I have ever had.

Back on the water, our night navigation is going well despite the pockets of heavy fog. Occasionally we spot other paddlers illuminated by their headlamps. They seem to be floating in white clouds of mist. They look like something straight out of a science fiction scene. The paddleboard racers in particular remind me of a hover-boarding Marty McFly from Back to the Future.

Thoughts wander in the sleepless night. From previous races I know making distance is a case of paddling and watching the clock and kilometers count down. One stroke after another, after another. 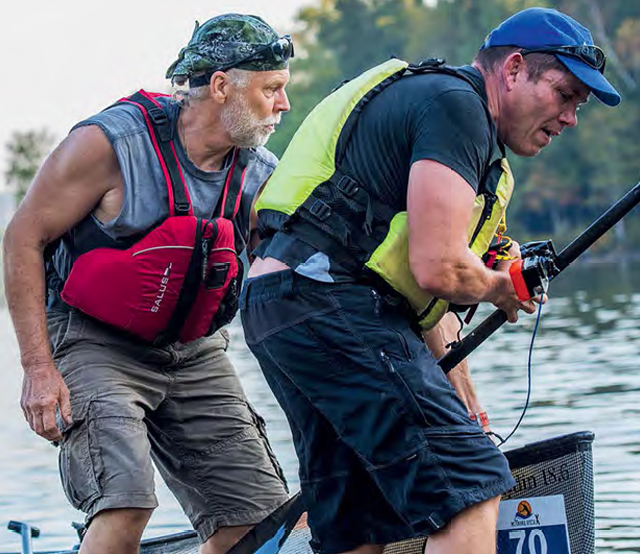 The End Is Near

The final portage back onto Fairy Lake is exciting because we know the end is close. The fog finally clears to reveal a clear and starry night and we spot four shooting stars.

So busy looking up, we lose our bearings in the darkness. It’s the gleaming bright lights of a Tim Hortons coffeeshop that sets us straight.

“There’s definitely no Tim Hortons on route,” Hap calls from the rear. We retrace our paddling steps without complaint, or stopping for a double-double.

“Just a little magical mystery detour,” I tell Hap. At 3:37 a.m. we pass under the town bridge, arriving back to our starting place. We had done it. Just 20 hours and 37 minutes later. 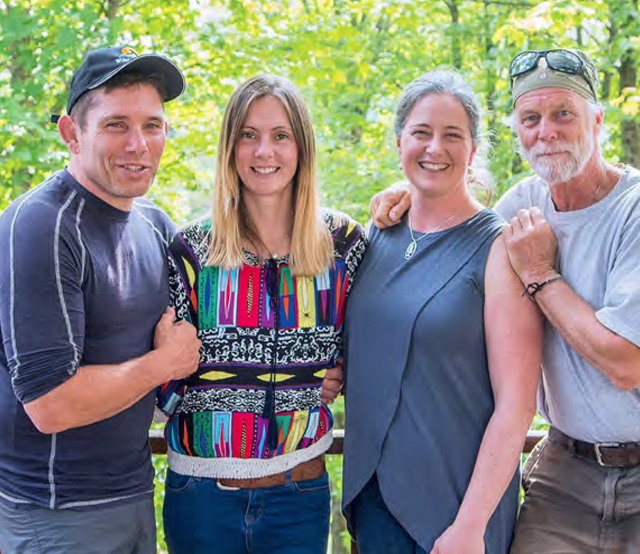 The gang is all here. Richard and Hap with their partners, Ashley and Andrea, at the awards banquet. Photo: Randy Mitson

At the post-race banquet racers reunite like old friends. A local plays an acoustic guitar. Prizes and swag galore are handed out. Thanks are paid to race organizers Mike Varieur and Rob Horton and their brilliant team of volunteers. Hap and I placed 24th, finishing almost seven hours behind winning tandem canoe team members Glen Dawson and Mike Vincent.

Thanks to the good weather conditions, 90 percent of teams finished this year. There are  lot of smiling faces in the room.

To much excitement, Varieur and Horton announce a race shake-up for next year—the Muskoka River X will follow the same course, but backwards.

Hmm. Sounds good enough that I might have to return for round two.

Richard Harpham is a human-powered adventurer and inspirational speaker who has completed over 9,000 miles of expeditions by kayak, canoe, bike and on foot including exploring the Yukon, cycling the Sahara and Canada’s Inside Passage. www.canoetrail.co.uk. 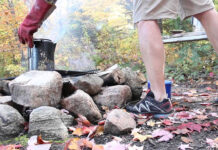