As an outdoor photographer, I am deeply inspired by beautiful landscapes. I have chased wildlife and culture all over the world. I have longed to visit what is considered to be the edges of the earth. Back in 2010 I joined an expedition that left Resolute Bay in northeastern Nunavut and continued eastward through the fabled Northwest Passage and onward to Greenland. This trip allowed for many once-in-a-lifetime photographic opportunities. I decided to do something special with the collection of photos and thus began the transition into a more professional future. Touching the fringes of the far north allowed me to continue dreaming.

Since that time, I continued to imagine what it might be like to travel to the opposite pole of the planet. What would it be like to visit the tip of South America, in the world’s most southerly city, Ushuaia? What would it feel like to be standing immersed amongst the wildlife on the shores of South Georgia Island? I tried to imagine what it would feel like to visit even the continental Antarctica itself. This past winter the dream became an epic reality.

Onboard our ship, the Akademik Ioffe, experts including biologists, glaciologists, researchers and a resident photographer ensured downtime wasn’t wasted. Time was invested in educating passengers about wildlife, geology and tips on how to get that perfect photograph. One of the most exciting activities offered during the trip was the sea kayaking excursion. At each suitable destination, those of us who had expressed interest for kayaking would put on their dry suits and gather for a pre-launch briefing. We were then motored by Zodiac to a cluster of kayaks moored nearby.

On the day this image was captured, nearly 100 humpback whale sightings were counted in the surrounding Gerlache Strait—a channel that separates the Antarctic Peninsula from the islands that make up Palmer Archipelago. At this moment in particular, the group was treated to a show they’ll likely never forget. A pod of krill-hungry humpbacks spouted before us. These baleen species mammals submerged mere feet below the colorful hulls and their flukes bid farewell as if it were a grand finale. 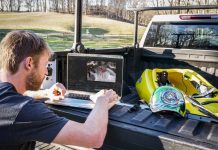 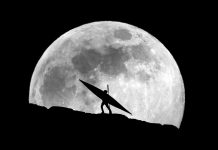 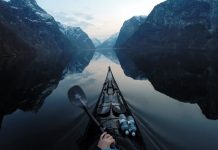