I pulled up to the farm the day after a late season snowstorm. The Ottawa River’s Lorne rapids are only about 500 yards away. Upstream and downstream, the river is still frozen and will be for a few weeks yet.

It’s around noon on a Sunday and the trio of raft guides I’ve come to meet are inside the barn, huddled around a pair of kegs. I’m greeted by red faces I chock up to the cold weather inside the unheated building, not the beer. It’s early and the tasting is yet to get underway.

“C’mon in!” says Chris Thompson as we shake hands. The tall British transplant introduces me to a second Chris Thompson (yes, there are two, and yes it gets confusing), an Ottawa Valley native, and James Innes who met the three at the rafting company where they spend their summers. The three are responsible for the best kind of upstart—a craft brewery they’ve dubbed the Whitewater Brewing Company.

Introductions out of the way, we get straight to why I’m here—the beer. It’s clear the trio knows their stuff. Stuff like the only four ingredients allowed in beer according to bavarian purity law and what type of glassware to pair with which beer. They’d never rub it in your face, though. That would require a kind of pretentiousness raft guides just don’t possess. “We met on the first day of guide training eight years ago,” the Chris’ explained. Stymied by the fact that they shared the same name, they have been fast friends ever since. “James came on board a little later,” they go on, “his experience is in home brewing.”

“We’ve been tossing around the idea of starting a craft brewery for the past four or five years,” says non-British Chris. The idea morphed from a half-baked idea tossed around the campfire circle into a true business within the past year. “Our beers will be available on taps at the local raft companies and taverns,” he explains, “and in growlers at local dispensaries. We’re even working on collapsible plastic containers for trips.”

As British Chris explains mash, the fermentation process and how their kegging apparatus can brew up to three batches a day, I munch on some fresh, chocolate-flavored malt, and wonder what it is about beer that draws in paddlers. For these three, it’s taste and the creativity behind experimenting with flavors. It’s also the uncanny ability of beer to bring people together.

Throughout the afternoon, the side door opens and with a blast of frigid air, vaguely familiar faces from the Ottawa Valley paddling scene stumble out of the snow and into the barn. In a moment of self-awareness, I ducked out after tasting a hoppy I.P.A. and a full-flavored cream ale, mustering up the willpower to leave while still able to drive home.

I pulled off the farm road knowing spring thaw mustn’t be far off. Come for the whitewater, stay for the beer.

Find out about seasonal varieties and where you can get the Whitewater Brewing Company’s beer on Facebook. 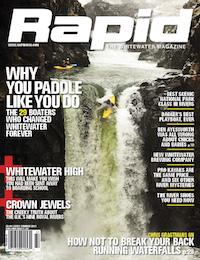 This article first appeared in the Summer/Fall 2013 issue of Rapid Magazine. For more great content, subscribe to Rapid’s print and digital editions here