When I was flat broke and guiding for a living, I lay awake many nights dreaming of a Gore-tex dry suit and a pro SLR camera capable of shooting eight frames a second. One of my life’s great ironies is that now, seven years later, I have both, neither of which are doing me much good here in my office. Sorting through this year’s photo annual submissions I found myself dreaming of the days when I felt rain trickle down the back of my neck—the days before my dry suit and fancy camera. The photos in this issue are taken by people who are not living life at a pace of eight frames a second. I found myself dreaming of days of longer exposures.

When friends and family see the quiver of camera equipment I lug around with me they ask me what camera they should buy. But what they are really asking is, do I need to spend that much to take great photographs?

My camera bag weighs 20 pounds and fills the trunk of most European cars. I have the contents insured for more than $10,000. It’s a marvel of polished glass and Japanese microprocessors that’s about as easy to pack in a sea kayak as the Hubble telescope. They take one look at it and swear they’d never spend that much on camera equipment. Funny thing is, I tell them, they don’t have to. My best photos were taken on an old hand-me-down manual camera from the 1970s.

I tell them to begin their photographic adventures by looking for treasures in pawnshops. Seek out a 35mm body and three lenses: wide-angle, normal and telephoto. Then I tell them to buy a shopping bag full of slide film. With the remaining $9,500 (or whatever their budget allows), I tell them to buy an around-the-world plane ticket and a comfortable pair of sandals and to spend the rest on traveller’s cheques. Then, during every waking hour—no matter if they are on the water, at the beach or riding Mongolian public transit—they should compose, focus and press the shutter button.

Authors of photography books will tell you that any good photograph is just film exposed to the light for some fraction of a second. What they don’t tell you is that the best exposures aren’t measured TTL—through the lens— they’re measured by salty, chapped, sun-burnt lips and callused hands. Good kayaking photographs start with their exposure to the elements, to the waters of our world and to the people and coastlines that surround them. None of the breathtaking kayaking pictures in our annual photo essays could have been taken from a desk, no matter how expensive the camera. 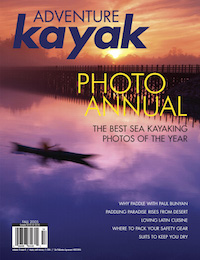