Author, artist and environmentalist Hap Wilson is in the final stages of producing his new book Heart of the Continent, to be released in 2017 by Firefly Books.

In 2009, Wilson spoke with executives from the Trans Canada Trail, the non-profit charity that is working to develop the country’s national trail in every province and territory. Wilson was asked to map a canoe route from Thunder Bay, Ontario, to Whiteshell Provincial Park, Manitoba, that would serve as a key part of the country’s coast-to-coast trail system. Wilson laid the foundation for the route, and is now nearing completion of his own guidebook complete with handcrafted maps, stories, illustrations and adjoining trips off the core route. Although Wilson had mapped extensively in Woodland Caribou Provincial Park east of Lake Winnipeg, much of the terrain for this guidebook was fresh for him. “The Quetico was new to me. I’ve never done any canoeing in that region at all,” he says.

The Path of the Paddle Trail

The Path of the Paddle is currently made up of six connected water trails, totalling 1200 kilometers and passing well-known canoeing destinations like Quetico Provincial Park and Atikokan. Some of the trails are still being developed and all will be operational and ready for paddlers by 2017. At the moment the trails can still be travelled at the user’s own risk and with the understanding that development is ongoing. 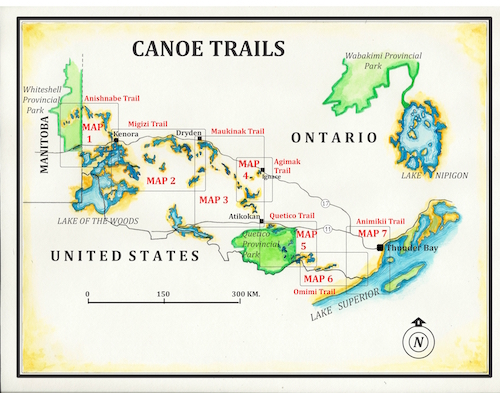 A handcrafted map by Hap Wilson from his upcoming book Heart of the Continent.

Heart of the Continent has stops full of lesser-known aspects of the area’s history, like the experimental lakes in northwestern Ontario, a freshwater research station made up of 58 small lakes. The route also touches on White Otter Castle, a massive, three-story structure on White Otter Lake Jimmy McOuat built himself, and a historic fur trade route in the Gunflint Lake area. Canoeists following Wilson’s guidebook can even have the rare experience of paddling along an international border, potentially portaging in Canada one hour and in the U.S. the next. “The only indication you are on an international boundary is they have the occasional boundary marker,” says Wilson.

The name for the canoe trail was born as Wilson sat with local canoeist Garth Gillis at a pub in Dryden, Ontario. “Why don’t you call it Path of the Paddle?” Gillis suggested, referencing the title of Bill Mason’s classic book of the same name. As a young paddler, Mason’s stomping grounds included parts of the trail like Shoal Lake and Falcon Lake, and when Wilson approached the Mason family about the idea, they thought it was a great fit.

Wilson began professional cartography in his 20s while working with the ranger service in Temagami. The in-field mapping carried out by Wilson and his wife Andrea for Heart of the Continent is a growing rarity in the age of aerial and digital photography. Six weeks of field research for the guidebook, his thirteenth published title, remain before a winter of map work and writing.

Guidebook as an environmental tool

What does Wilson hope readers gain from his upcoming guidebook? Ideally, he hopes Heart of the Continent can be used not only as a guidebook but as an environmental tool to bring awareness to Canadian watersheds.