Canada’s own Indiana Jones, the explorer who re-wrote the map of Canada from his canoe, has finally settled down just long enough to publish a book. Written as an insightful adventure story, Alone Against the North follows Adam Shoalts on six different expeditions, including his return journey along the Again River in the Hudson Bay Lowlands, and asks what it means to be an explorer in the age of Google Maps. 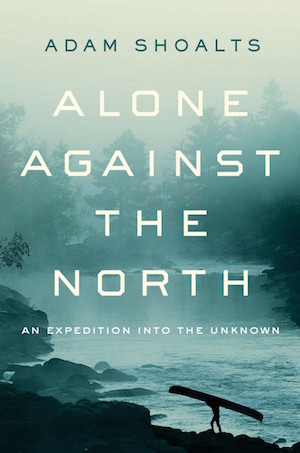 At a time when anyone with a laptop can look up their neighbour’s swimming pool from a satellite image, Shoalts takes up his canoe and ventures to the place with the highest concentration of blood-sucking mosquitoes and blackflies on earth, on a single-minded mission to fill in the gaps of our modern map the only way he knows how, by visiting them in person.

“It’s pretty exciting to find something that’s not on your map, that’s what every explorer dreams of doing,” says Shoalts. “To know that the map is imperfect or incomplete, it makes you think the age of exploration is not over.”

With only the ghosts of fur trade route explorers to guide him, Shoalts takes each turn in the river bend as a precious opportunity for discovery. It was one of these turns in the river bend that sent him and his canoe over an unmapped waterfall on his first venture to the Again River in Northern Ontario and Quebec, spurring the unlikely discovery of a series of five unmapped waterfalls, and bringing Shoalts onto the world stage.

Prior to Shoalts’ expeditions, areas like the Again River had only been mapped using aerial and satellite images. As Shoalts paddles along, he meticulously inspects plants and trees, taking notes of flora and fauna and mapping details like the exact height and location of each waterfall.

Shoalts, who has been named one of Canada’s Greatest Explorers by Canadian geographic, doesn’t identify with Indiana Jones, the brash American gunslinger of Hollywood. But as an explorer, archaeologist and adventurer, the comparisons are sometimes hard to deny.

The 29-year-old professional explorer from St. Catharines, Ontario, says when he’s not staring down polar bears, climbing mountains or fashioning bow and arrows from trees he’s chopped down, he’s always had a soft spot for reading.

He says he felt a need to tell the story of his expedition, which has now been told in media around the world from China to Poland, in his own words.

He hopes that by sharing his story, he can help protect the Hudson Bay Lowlands, or Amazon of the North as Shoalts refers to it. The Lowlands extend as a wetland labyrinth one and a half times larger than the United Kingdom across Northern Manitoba and Ontario and Quebec. Though vast, this area is often overlooked, and it’s value forgotten.

“We are destroying the wilderness faster than we can explore it,” he says.

“Maybe in some small way [the book] will inspire people to care a little more about it and want to protect it.”

Leaving little time to rest, Shoalts says his next adventure will be a five- month solo journey across the Canadian Arctic on foot and by canoe leaving from the Alaska/Yukon border in 2017. 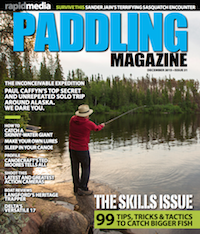 This article first appeared in the December 2015 issue of Paddling Magazine. To read the entire issue, click here. To receive Paddling Magazine in your inbox, subscribe to one of our newsletters here.