If you aren’t familiar with the incredible story of Aleksander “Olek” Doba, you should be. In 2011, the then 64-year-old splashed onto the world scene when he completed a 99-day, 3,400-mile trans-Atlantic crossing from Senegal, Africa, to Brazil, South America, in his custom 21-foot kayak, Olo. 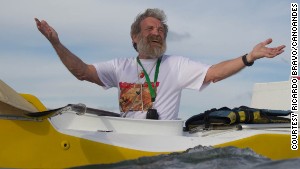 Just three years after setting the world record for longest duration ocean crossing in a kayak—and becoming just the fourth person to kayak across the Atlantic (and only the second, after Peter Bray’s 2001 crossing, to accomplish the feat enitrely under paddle power, without sail)—the 67-year-old was at it again.

The indefatigueable Olek—as his friends and thousands of followers (Doba’s Google+ page has received more than 5.4 million views since his journey began) know him—set out from Lisbon, Portugal, on October 6, 2013, and has been paddling nearly continuously across 5,400 miles of open ocean to his planned landfall in New Smyrna Beach, Florida.

Incredibly, both of Olek’s journey’s have been entirely self-funded—no sponsor logos plaster his beloved Olo, paddling the Atlantic is simply Doba’s idea of a fulfilling retirement.

Solo and unsupported, Olek has battled storms, prolonged saltwater exposure and multiple equipment failures. He averages about 30 miles per day, but in January and February strong southwest winds, Gulf Stream currents and a series of storms in the infamous Bermuda Triangle stalled his progress for over a month and pushed him backwards over 100 miles.

In late February, a broken rudder forced Olek to head for Bermuda to make repairs. After a month hunting for a ride to the GPS coordinates where he’d veered off course in January, Olek found the 325-mile lift south he needed to resume his record attempt. The sailing ship Spirit of Bermuda, a replica of a 19th century Bermuda sloop, dropped Doba off in the Atlantic on March 27 in a dramatic—and very nearly tragic—launch.

“Shortly after Mr. Doba and his kayak had been safely lowered into the ocean, a large swell broadsided the three-masted sloop, causing it to roll on top of the kayak. The 1,300-lb kayak became trapped under the ship’s rub rail, inflicting severe damage.”

With typical determination, Doba simply cut away the damaged structure and announced he would continue as planned. Another mishap broke his navigation light and radar antennae, which he repaired using a boat paddle and soda bottle.

April 17th marked Olek’s 193rd day at sea (162nd, excluding his Bermuda stop-over)—by far the longest trans-oceanic kayak journey in history. But he was in no rush.

Doba expects to have another 30 years to explore the world, friend and fellow Polish explorer Piotr Chmielinski told CNN earlier this week—members of Olek’s family are known to live to 100.—Virginia Marshall