In 2017, Justin Barbour along with his trusted sidekick Saku set out on a 68-day expedition across Newfoundland. Newfoundland and Labrador have some of the last truly untouched wilderness on the planet. We reached out to Justin to get the inside scoop on his epic Newfoundland crossing.

Tell us about your background?

I’ve been on adventures for as long as I can remember. During my childhood, I lived in a small rural community outside of St.John’s, Newfoundland. I was always outdoors and loved every minute of it. Building cabins, lean-toos, biking, fishing, swimming, I was always at it. And always had dreams.

Hockey was also a huge part of my life and like many other young players, I dreamt of making the NHL. I played competitively for years, moved to New Brunswick for Junior, and took my shot, but as we all know the chances are slim and eventually I came back home to study Physical Education and become a teacher. While still playing senior hockey locally, it was during University when we studied outdoor activities and survival, that I rediscovered that passion from my youth.

For years I hardly went in the woods because hockey was my focus. But I stirred up that feeling of exploring the unknown and freedom that I remembered as a young boy. Now, this life and the endless trips there are to be planned is the new focus.

The physical and mental challenges, the indescribable rewards that await and that feeling of being alive and in the moment that can only be felt by being off the beaten track and traveling by your own power. I love to live it and share it so that others can be encouraged to dream their wildest dreams and live their lives to the maximum. If they get out to appreciate and respect mother nature then that’s a double win.

What made you want to go on this expedition?

I had been doing smaller trips, 3 days-4 days- 7-days-14 days. 99% were solo, including the longer ones because committed partners were difficult to find. And also because I sort of got into this on my own time through books, documentaries and solo practice whenever I could.

I was just so enthralled by being out there. So I was focused early. And one thing I’ll tell you about me is that when I get an idea I need to run with it, I’m locked on.

Early on, most thought it was strange for me to be spending a couple of nights in the bush on my own while there were more important things happening in town, but to me, I was preparing for something bigger, that I did not yet know of and I was fine by that. I needed to be out there and was super content with my own independence and company. I would entertain others when they wanted to join and loved it, but no one seemed to have the same intensity of interest. So most times it was solo and it became an obsession of my own!

[ Also read: The One Real Risk Of Solo Paddling Adventures ]

I had begun reading books on old Newfoundland and Labrador explorers and trappers. Some early Europeans and others the aboriginal people of our province, Beothuck, Mi’kmaq, Innu and Inuit. There were epic stories of adventure, of struggle, success and fascination in the splendors of nature. I also read and watched trips from more modern outdoorsmen and explorers. Like Dick Proneeke, Lars Monsen and Mike Horn. With that all digested I had the itch to plan an expedition of my own, so looking at the whole of Newfoundland one evening I decided that traveling its width, some 700 kilometers, would be a perfect challenge. I wanted to go big and thought that this would be a fine way to see the least explored areas of my provinces wilderness.

Why did you choose Newfoundland and specifically this route?

Newfoundland and Labrador have so much wilderness, why go any further? It’s some of the last true wilderness left in the planet. Living on the island portion of our province I thought why not go the distance and cross it all. If I started in the west I would get the prevailing winds at my back when I paddled and I would finish near my home on the most easterly portion of the island.

I planned to first cross 100 kilometers of the Long Range Mountains by foot then paddle and portage the remaining 600 to the end. My boat was a 6-pound Alpacka Raft. In the last days leading up to the expedition start, I added a sled to pull my gear over the mountains on snowshoes because snow levels were still extremely high due to a late winter.

What were the highlights of the expedition?

There were highlights daily on the trail. So much is happening when you’re always moving forward. Some good, some not so good. Walking through the Long Range Mountains (An extension of the Appalachian Chain here in NL) pulling a sled was memorable. We started at sea level and climbed about 1800 feet and then back down the other side. 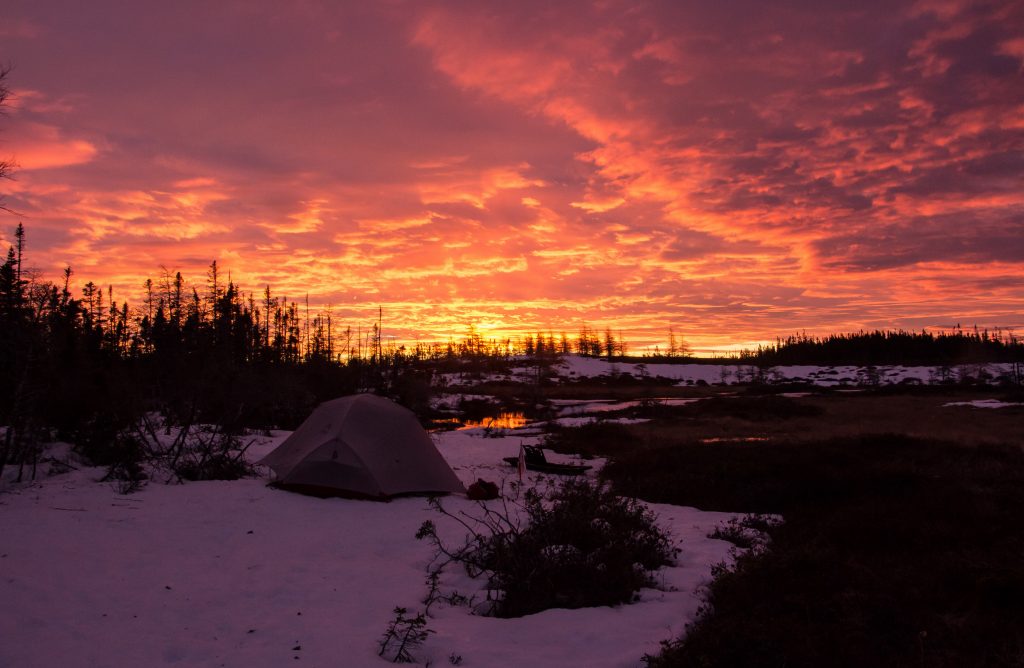 We were blessed with some warm and sunny late spring days but the albedo effect was strong off the high mountain snow. Unfortunately, I forgot sunscreen and had none until my first resupply at the 100 km mark. I received a bad sunburn to say the least.

Hitting some real productive fishing holes that were deep in the country was also a treat. Wetting a line is a big joy for me on these trips. A learning experience and a not so good highlight came when I flipped the raft in white water and lost plenty of gear. It was scary stuff. Amazingly I have footage of this on the YouTube series. Luckily Saku and I were okay. Lessons were learned every day out there.

What were your biggest challenges on the trip?

Challenges are what make trips interesting. Managing yourself is one of the biggest. On this trip, my body held up pretty well and in my mind, I just kept breaking the trip down in small chunks to minimize the feeling of distance. One actual situation was when the snow was melting and I was still pulling a sled. I had to break camp in the at first light to get hard crusty conditions because by afternoon you would sink to your chest even with snowshoes on. I battled that for a few days.

To make matters worse, on this trip I had to wait unexpectedly for over a week for lake ice to thaw and during that time all food had to be rationed down even further

Another big and interesting challenge on this expedition was trying not to eat all my food. I’m serious. You get really hungry out there grinding solo through the conditions and only have limited rations. Every bite is savored and appreciated. Many evenings I stare at the food bag wanting more but know I am only eating into the next days’ rations. Over time your body adapts and you can run on less, but some evenings you still you get that craving to eat more once supper is finished. Then again on other nights, I’m that tired I can’t even cook and just end up eating a few handfuls of trail mix and diving into the sleeping bag.

To make matters worse, on this trip I had to wait unexpectedly for over a week for lake ice to thaw and during that time all food had to be rationed down even further. Drinking tea and coffee helped curb my hunger and I relied on fish to fill the void, which I did well with. Ultimately your three biggest challenges on any expedition are managing your food, getting from point A to B and staying safe while doing it.

What was it like to do the trip with Saku your dog?

Doing a trip with Saku was everything I could have asked for. I find it hard now to think of doing an expedition without him though I know it is a reality. Especially if I want to get into longer winter treks which is a strong desire I have. But Saku is always the silver lining out there. When things get rough and the daily grind and distance are wearing me down, I look to Saku for motivation from the jump in his step. It’s contagious energy to see him so excited. The security around camp and his scent is good for marking your territory and decreases the chances of any unwanted animal visitors. He is also entertaining and has become my best friend and wilderness traveling companion. 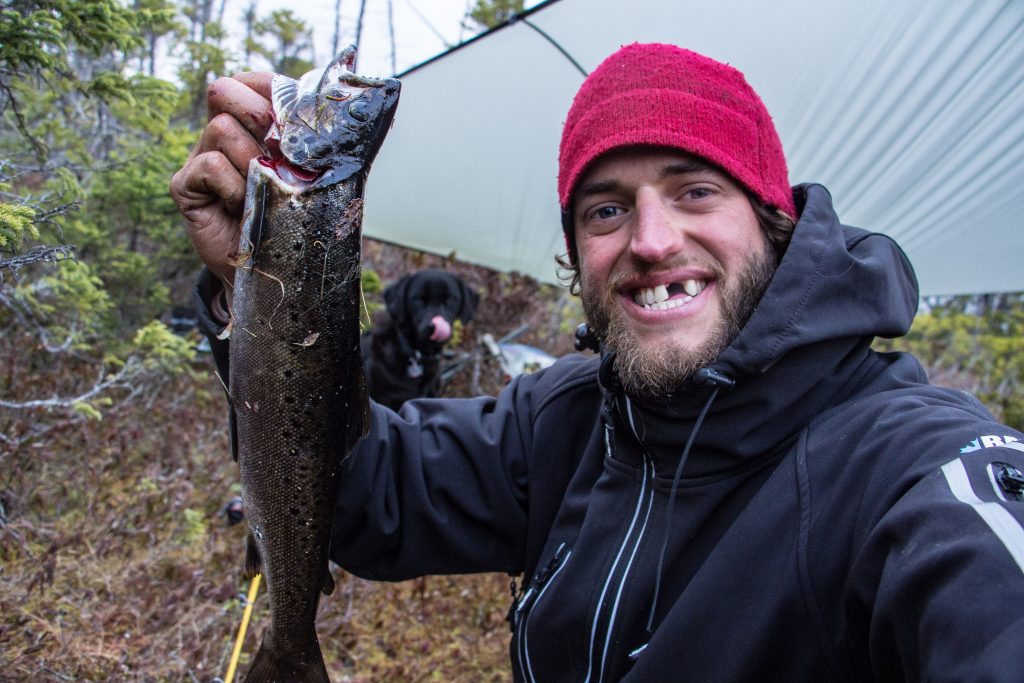 If there was one disadvantage it would be dealing with his food weight, though it can be managed. During certain points of this trip, which were longer sections in between resupplies, I would have to carry some of his extra food and of course, his first aid because he only has limited room in his pack. But that’s okay because it’s worth having him there and I’m pretty hardened to it now. Just means a better workout!

Overall there are really no negatives to taking a dog on any wilderness adventure if they are suited for it, well trained and obey your commands.

What were the trip stats?

What is on the horizon for Justin Barbour?

Last summer I paddled 1000 kilometers across Labrador and into Northern Quebec with Saku so that was a big step. I had hopes of going 1700km’s and reaching Hudson Bay. Nature had other plans though and we were cut short by an unusually early October winter. So now I am leaning towards a winter expedition to maybe finish that. But nothing’s in stone and ideas are always rolling so all I can say is that more adventures are to come.

I also have a book coming out in September on the Newfoundland expedition and Saku has a children’s book being released by a local author at the same time. Then in the Fall, I plan to release a new documentary series on the Labrador-Quebec trip. So it’s exciting times and I am looking forward to moving forward.