Windblown snowdrifts dappled by the soft light of the midnight sun make the winding, wilderness roads of rural northern Sweden look like a painting from the front of a Christmas card. Instead of a tree tied to the roof, this car carries bright green and red kayaks.

Tyler Curtis slams the brakes as a reindeer wanders out of the forest and into the road. “Is that real?” asks Scott Martin, from the passenger seat.
The outskirts of the quiet mountain town Kittelfjäll couldn’t feel further from home.

Growing up in South Africa, Martin spent holidays at the beach—the reindeer may as well have been a unicorn.

It’s springtime in Sweden. Buds are bursting open on roadside aspens, giving the forests a fresh and fuzzy, deep-green coat. Snow banks linger in town and there’s still a sprinkling in the mountains, but Curtis is packing his skis away.

A five-time Canadian National Champion kayaker, Curtis has traveled the world, winning extreme races and freestyle events. He moved to Kittelfjäll, Sweden, in 2011 with his partner, Lisa, to start a family and live, work and play in the mountains of Scandinavia’s North. The lifestyle allows them a seasonal migration back to Canada with their newborn daughter, Tove.

After spending a few winters charting undiscovered rivers carving through northern Sweden’s mountainous landscape, Curtis is itching to introduce the area’s gems to the rest of the whitewater world.

Just kilometers to the west is Hattfjelldal, the region in Norway that has become a mecca for elite paddling, drawing crowds of traveling kayakers and exploding in popularity in recent years. While Norway has larger cities near the Swedish-Norwegian border, most of Sweden’s population centers are far to the east along the coast or in the country’s interior. 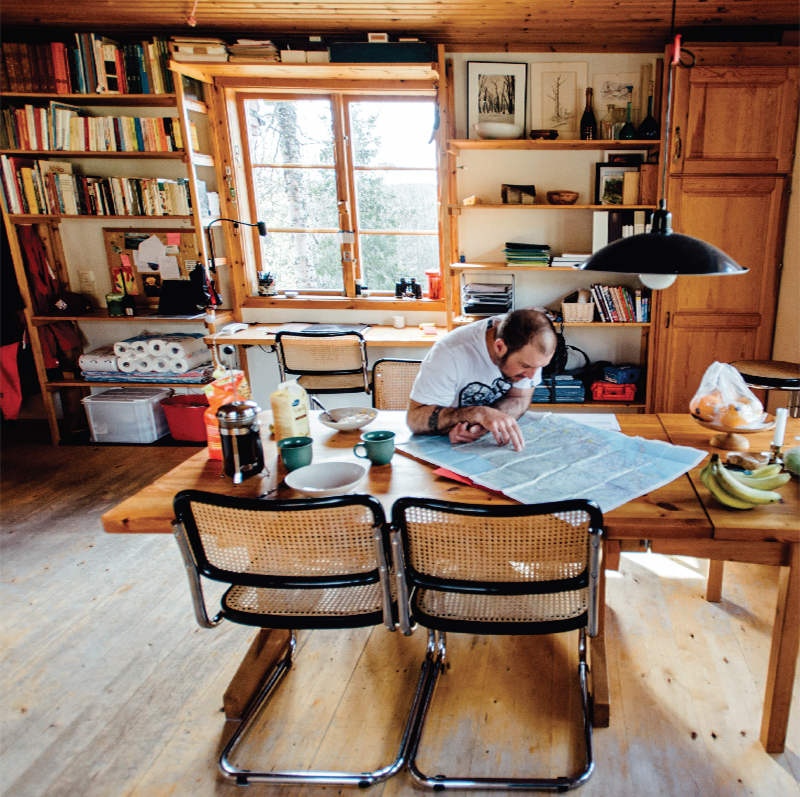 “As soon as you cross the border, it feels a bit like the Wild West,” says Curtis. The isolation of the region means few paddlers bother to make the hour-long drive into northern Sweden’s little-known class V playground.

Curtis wants to change that.

“I’ve been testing out water levels for a couple springs now,” he says, “and getting beta from paddlers here in Sweden.”

This trip with Martin is the first time a friend from outside of Sweden has flown in to kayak with Curtis, and their mission is clear: paddle and document the region’s untouched whitewater to make it more accessible for the international kayaking community. Martin, a seasoned whitewater photographer, is the perfect partner in crime.

The steep sides of Kittel Mountain meet the small town of Kittelfjäll near the tree line, where traditional red-painted timber cottages are scattered amongst the lanky birch and spruce. Fishing, hunting and reindeer herding are primary activities for the hundred yearround locals. To the rest of the world, Kittelfjäll is known as a ski town. Winter tourism plays a major roll in the town’s economy, with a resort that employs locals and draws an influx of out-of-town employees and customers during the ski season. With no real downtown, Kittelfjäll contains a couple scattered stores, the rustic Hotell Kittelfjäll and a single restaurant serving quality local food. One lonely road curves through the village and valley with a gas station and general store aptly named SistaUtposten—Last Outpost.

“Kittelfjäll is the epicenter of the mountains,” says Curtis, “and it’s my home.” Using his cabin, a typical Swedish-style clapboard cottage, as home base, they are able to eat well, dry clothes and keep camera gear charged. Natural light floods the cabin where Curtis and Martin sit with maps spreadout on the thick wooden dining table. This is how they plan their whitewater exploration of the surrounding South Lapland area. The potential for paddling is greatly defined by geography. The varied topography and subalpine climate create a whitewater wonderland where the movement of melting snow can be followed as it travels from its source, high in the mountains, down to the Baltic Sea.

With little human impact, save for a few small communities and hydroelectric dams the region is pristine wilderness. “We paddled a small zone in a big country and were able to do everything within an hour-and-a-half drive,” says Curtis. And by everything, he means steep creeks, drop pool rivers, park ‘n’ huck waterfalls, continuous whitewater runs, big water and quality freestyle and surf waves.

Sweden is the land of plenty.

Jumping up and down on the bank of the Vojmån River, Martin pulls his hands from his armpits where he’s been attempting to thaw them. Fumbling his camera with frozen fingers, he aims at Curtis who’s easing his way down a long, cruisey rapid. Just seven kilometers from the cabin door, the Vojmån is a breezy backyard run, dropping through two scenic lakes and passing by Gömda Vågen or Hidden Wave. One of the only easily accessible standing waves in the area, Vågen is a favorite spot for the handful of local paddlers. In its current super-flood stage, the Vojmån is a perfect warm up.

Warm being used loosely—getting used to frigid water is the biggest adjustment in this northern destination. “After our first day, I was really happy to get off the water and wrap my hands around a warm cup of coffee,” says Martin. Most rivers in the region originate to the west, in the mountains that form a natural border between Sweden and Norway. “They start as small streams and quickly turn to creeks with steeper sections as they flow out of the mountains toward the interior of the country,” explains Curtis. The start of spring’s thaw provides a cycle kayakers can follow: catch the snowmelt runoff in the west and follow it east as the high water moves downstream. 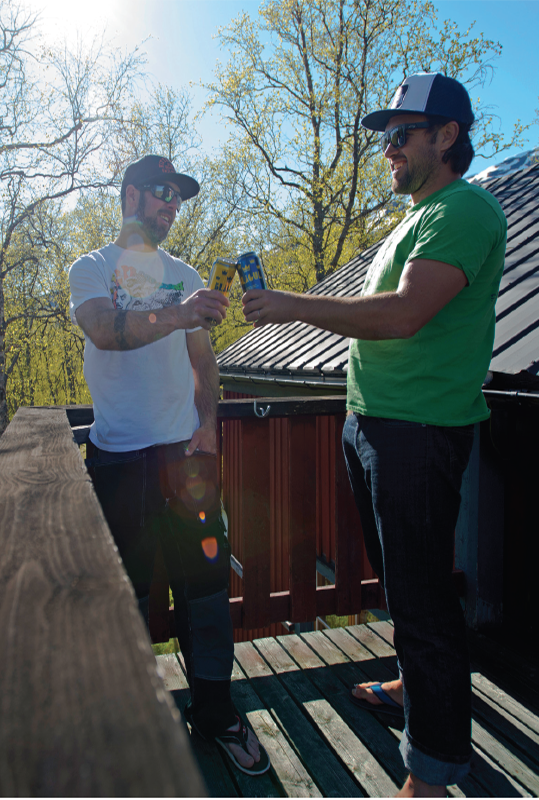 “You can see the heart of the change from winter to spring,” says Curtis, and the changes are quick and tangible. Leaves spring out of trees that have been bare all winter as runoff pushes new life through cold creeks. Paddlers everywhere know these are the signals to start following flow, and in Sweden steep topography speeds up the process.

“We wanted to push to get some of the smaller creeks that run for a shorter amount of time,” says Curtis. “You need to get certain runs on optimal days when they have the perfect level.”

With the knowledge Curtis has accumulated during his time as a local, tracking down the best water levels is tricky, but not a frenzied rush. Only on a couple occasions during a two-week period did Curtis and Martin re-visit runs, mostly seeking to explore new territory.

For photographers like Martin, the golden hour is a magical time when the sun, low in the sky, casts warm, soft light across a subject, be it a landscape or a boat on the water. As Martin blinked sleepy, jet-lagged eyes on one of the first nights in Sweden, it caught him by surprise that the clock read 2 a.m. Warm sunset hues filled the room as the midnight sun dropped gently towards the horizon. Jumping up, Martin frantically, quietly—so as to not wake the snoozing baby—set up a time lapse.

“This was the furthest north I’d ever been,” he says, awed at the fact that at this time of year in Sweden, shooting in the golden hour would mean being on the water all night. Another challenge to documenting South Lapland’s rivers is the fact that Curtis and Martin are a party of two. As Martin positions himself on the edge of the Gardsjöbäcken River’s frothy blue-green water, his camera is in one hand as he keeps the other free to grab the throw bag at his side.

With a backdrop of 200-year-old pines and a series of slides, technical boofs and drops, the Gardsjöbäcken is a photographer and paddler’s dream. It’s a short run—around three kilometers—and it’s stacked, dropping a couple hundred meters over that distance. Running it on what Curtis calls “the high side of good,” means every rapid is a scout. “We had to get out and check if it was runnable before we even thought about getting the camera out,” says Curtis. Safety dictated the day. “Knowing that our goal was to document each run instead of just getting down it meant we moved slow,” says Martin. “It meant camera angles had to be sacrificed to set up safety.” Every shot was hard-earned.

From drysuits on the water to board shorts at the BBQ, Curtis and his family prepared a traditional Swedish meal of pickled herring, boiled potatoes, boiled eggs and sliced, dried meats to celebrate Midsommar. Next to Christmas, Midsommar is the most important celebration in Sweden, signifying the start of summer and, for many, a five-week summer break from school. For Martin, connecting with local traditions is an important part of exploring a new region.

“It helps me get a feel for the people of the area,” Martin says, “and a sense of how the landscape has shaped them.”

Joining the Kittelfjäll community for festivities around the maypole in a local park brought this element into their whitewater adventure.

One of the last days of exploration took the team in search of big alpine water. “Our aim was to hit the leftover snowmelt in the higher terrain and ride out some of the more pushy, full-on whitewater,” Curtis says.

Above the tree line, they put on the Skalmodal River in the open tundra. Surrounded by snow-covered peaks in all directions, the alpine river drops into a zone of azure sky, green tundra and cold grey rocks framing roaring whitewater. Plunging down toward the tree line, birch trees take on a twisted, bonsai-like form, gnarled by the harsh mountain exposure. Running deeper into the dense forest, Curtis looks up from his creekboat to towering spruce and skyward peaks. It’s easy to feel isolated here, and impossible to imagine that a gravel road runs parallel to the river just 800 meters away.

Reaching the Skalmodal’s take-out at the Norwegian border, exhilarated from a breathtakingly scenic run, Martin finds a sign that sums it all up: “Welcome to Sweden.”

Having earned the respect of the Swedish kayaking community, Curtis is developing a reputation amongst local paddlers for his knowledge of the area’s rivers. “I get Swedish paddlers messaging me asking about water levels and runs,” he laughs. Encouraging paddling in northern Sweden is exciting for Curtis, and as Martin defrosts from this trip, he’s already planning their next adventure, hoping to add to the list of discoveries they can share with others who hunt for whitewater gold.

This article was originally published in Rapid, Volume 18 • Issue 2. Read this issue.