Spencer Cox and Sean Allen stand on a moist ledge above a big drop in the steep Beauty Creek Canyon in Jasper National Park. It’s not the drop they’re concerned about so much as how the water below belches from the undercut.

Brock Wilson was thinking about the same thing in 1986 when he and, then Jasper local, Stuart Smith ran the drop. “I watched Stuart pencil in and get stuffed under the overhang,” Wilson remembers. “I wanted to land flatter, but I landed too flat and wrecked my back.” The waterfall became known around Jasper as Lumbarsis.

Eighteen years later, Spencer and Sean are weighing the pros and cons of boofing and compacted spines. Reflecting on the for- tunes—and misfortunes—of the past is happening a lot around here these days.

Locals like Sean and Spencer, along with a handful of other paddlers born in, raised in, and forever tied to Jasper, are re-discovering its formerly-prized creeks and rivers and pick- ing up where early kayaking pioneers left off.

As a birthplace of extreme kayaking in Canada, Jasper was as much an international whitewater destination in the 1980s as Squamish and Whistler are today. Paddlers can access at least 12 high-quality class III-V rivers within an hour of the national park’s tourist centre. Jasper offers everything from steep bouldery creeks to ledgy waterfall runs and big volume rivers.

In the 1990s, while playboating fervour engulfed North America, Jasper’s kayaking scene was caught in a whirlpool. The downward spiral began when Parks Canada closed a popular local river and accelerated with the death of a local paddler. Many paddlers had also reached a zenith in their paddling careers and shifted toward city life, chasing well-paying careers rather than first descents.

First descents were exactly what a group of Germans were looking for when they came to the Rockies with their boats in the late 1970s. In search of challenging Canadian rivers, members of the German Alpine Kayak Club had no clear idea of what they could run. The locals weren’t much help. Although skilled, the Jasper paddling scene was stuck mostly in fibreglass slalom boats.

Established as the National Park’s town in 1907, Jasper has long been a mixture of terra cotta souvenir-hocking buildings, 100 per cent genuine Alberta beef steakhouses and depression-era Parks Canada structures with faded cedar shake awnings. It hasn’t changed much since the Germans were here, except that now a McDonald’s restaurant stands brazenly in the middle of town. Tourists, it seems, are hungry for cheeseburgers after long days of discovery in the undisturbed scenery just outside town limits.

I’m leaning against the faux-log façade of McDonald’s when Sean Allen rolls up in his dented grey truck. With his pale complexion, fiery eyes and dark goatee, he looks like he belongs on the seat of a Harley. He traded in his motorcycle after hitting a bus. Now he throws himself off bus-sized pourovers instead.

On a motorcycle or in a kayak, Sean is a hard-living guy. He’s taken some big hits since he started paddling in 1999. During a one-week stretch, he took two of his most severe beatings. One of them happened on a high-water mission to the Bighorn when he landed slightly crooked under a waterfall. The river squashed him to the bottom as if being pressed to the pavement by the boot of a Hells Angel. That slowed him down for a while. His skill has since come to match his nearly fearless demeanour.

We leave the processed putridity of McNuggets behind to meet Spencer and take advantage of the long central Albertan day. Just five minutes outside town, the Maligne Canyon is the after-work creek run of choice. When I first came here a few days ago, the place was like an attraction at Disneyland. Swarms of tourists dangled themselves over the safety rail- ings to capture a digital image of our show.

“Are these extreme kayakers?” inquired a voice from the mob. The eddy I paddled into certainly felt extreme. What should normally be a calm backwater was actually a boiling, spitting current. “There’s an underground cave system that drains Medicine Lake,” explained Sean as he watched me flail away. Cracks in the limestone walls fill the canyon about every 100 metres. The one-kilometre creek run starts out 10 feet wide, but by the end it’s a legitimate river.

We started running the canyon one drop at a time,” explains Spencer, the other prime mover behind Jasper’s himself. He tumbled around in the hole until he resurgence. “We ran the bottom drop one night then went home. Eventually we worked up to the class V Sickle. Now we run the canyon every night. I’ve probably run it a thousand times.” I assume he’s exaggerating, but his detailed knowledge of every rock and eddy tells me he’s not.

I think back to two days earlier when Spencer led us to a put-in that was crawling with signs of grizzlies, banging his boat with his paddle and brushing sun-bleached hair out of his eyes. Though he doesn’t let grizzlies keep him from paddling, Parks Canada has been a little more troublesome.

Just upstream of the canyon is one reason why Jasper’s kayaking scene went south. A steep and technical run flows between Maligne and Medicine Lake. It’s a two-kilometre tour de force of class V whitewater within a half-hour of downtown Jasper. In 1993, new park regula- tions prohibited boats on this stretch during May and June to protect harlequin duck nesting. By 1999, a restricted activity order completely shut down paddling between the lakes. Parks Canada cited a drastic increase in rafting traffic as a major disturbance of duck activities. While it is true that the number of rafts floating the river in a year had risen from 10 in 1986 to 1,600 in 1991, the ban included the lower behind-the-mountain run even though it wasn’t commercially rafted.

“We never did see any harlequins on the lower stretch,” commented Al Colwell, junior representative for the nearby Hinton Strokers Kayak Club, adding that the closure pulled their most important intermediate and advanced river right out from underneath them.

While the river is occasionally poached on stealth missions, the Strokers are adhering to the regulation and teaching in less ideal places.

With the closure, paddling in Jasper began its march to the basement, a trip sped up by a 1999 run down the McKale River that ended in tragedy. Jasper’s Mark Oddy was no stranger to high water or steep descents when he entered a sticky hole to knock his paddling partner loose. Though successful at bumping out his friend, Oddy was caught in the mess himself. He tumbled around in the hole until he disappeared. Despite extensive multi-agency searches, his body has never been recovered.

“The death of Mark Oddy had a big effect on the kayaking scene in Jasper,” explains Sean soberly as we wring ourselves out from the evening Maligne Canyon run. “Anybody that was halfway into paddling around here just pulled right back. There was hardly anybody left.” The Jasper River Runners, a club that once filled an entire CN Rail hangar, faced financial troubles and closed its doors soon after.

While many others lost their passion or moved away, Sean and Spencer, spurred on by the paddling pantheon that is Jasper, picked up a video camera and teamed up with locals Logan Rutherford and Mark Basso to film their favourite runs. After a summer of marathon paddling weekends all over B.C. and Alberta, they had enough footage to release the video Entropy. Circulated mainly in Calgary it quickly sold 200 copies and is now in its second printing. A fringe benefit of the video was its showcasing of the filmmakers—virtually unknown until then—as stellar paddlers from a forgotten corner of Alberta.

Entropy also spawned kayakwest.com, a website full of useful information about the runs around Jasper and the West. “Guidebooks only cover a tiny chunk of Western Canada,” says Spencer who runs the site that averages 1,500 hits a month. “Kayakwest encourages people to get out and explore or look at some pic- tures and river descriptions to see if any given run is something they want to try. There is life in Alberta and B.C. outside of the Kananaskis.”

One of the rivers featured on the web- site is the Fraser. One hour west of Jasper, carving sharply through the rotten rock below Mt. Robson, the Fraser is still 1,000 kilometres from its deltaic mouth in Vancouver but it’s already big and wide. the Fraser’s raft run put-in is the site of Fraser River Fest, a relaxed and fun event organized by Spencer to showcase his favourite backyard runs: a technical class IV series of boulder gardens with trashy surf waves, a terrifying canyon and a big volume play run. Attendance ballooned from just 12 paddlers in 2003 to more than 50 in 2004.

Energized with the same drive to explore whitewater as the Germans, Sean and Spencer are prodding Jasper’s paddlers toward a rebirth. They have outlasted a boom and bust kayaking scene, where ducks ruled rivers and paddling partners were scarce.

If you show up at Beauty Creek this year when the water is just right there’s a good chance you’ll see Jasper’s local boys standing above Lumbarsis, thinking about that undercut.

Raymont Schmidt is a writer living in Canmore, Alberta. 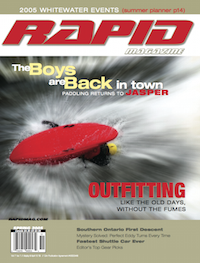 This article first appeared in the Spring 2005 issue of Rapid Magazine. For more great content, subscribe to Rapid’s print and digital editions here.