Sarah Outen’s late father once described her as a carthorse—strong, dependable, good natured and capable of going on forever.

These traits served her well in 2009, when she became the first woman and the youngest person to row across the Indian Ocean, just a year after her father’s passing. Focusing on the challenge helped Outen cope with her grief, and she soon set her sights on an even more formidable goal.

PADDLING, PEDELING, AND ROWING AROUND THE WORLD – ALMOST

Over the last three years she’s paddled, pedaled and rowed three-quarters of the way around the world on a journey that will take her 20,000 miles back to her starting point in London, England.

In 2012, attempting to row solo from Japan to Canada, she encountered a severe storm and spent 36 hours strapped in her tiny cabin, her breath catching every time she capsized, watching more and more water seep into her living space, realizing the boat was taking longer and longer to right itself. Outen was rescued by the Japanese coast guard, her boat was lost at sea and she returned home to England suffering from depression. The carthorse sought help, found another boat and continued the next year with a characteristically positive attitude.

“You can’t be totally set on your original plan and take it as a failure if it doesn’t work out,” Outen says. “If there’s a way to evolve with changes, to pick up and carry on, then really embrace that. Being open to the magic of those changes can bring some of the best experiences of an adventure.”

The plan evolved again in 2013. On her second attempt to row the Pacific, currents and winds blew her away from Vancouver. She diverted to Alaska’s Aleutian Islands, and returned in 2014 to kayak 2,500 kilometers along the remote volcanic chain and the Alaska Peninsula. At the first road, in Homer, she climbed on her bike to cycle across North America in the winter. Her last leg is rowing the Atlantic back to London this summer.

“I don’t just like it—I love it,” she explains. “I love the human powered element, being out in the wild, experiencing new things, new places, new people.”

I joined Sarah for the kayaking legs of her journey, including the wild and challenging Aleutians. Despite very little rough water kayaking experience and a very new flatwater roll, she endured 16-hour paddling days, intimidating tidal rips, daunting crossings and currents that swept us away from the safety of land. We were hundreds of miles from help, yet she summoned the mental strength to keep going when she was scared. In 101 days, we only exchanged heated words a few times. Outen doesn’t hold grudges, her philosophy is simple:

“When times are tough, I focus on good things about the day. If you spend all your energy being negative, you’re not going to be very productive. You can let the negative stuff have a bit of a shout to get it out of your system, then focus on the positive, even if it’s just thank goodness the day is over.”

The carthorse has evolved herself during the journey. She’s now engaged to farmer Lucy Allen and looking forward to getting back to the UK for her wedding. “It really enriches your understanding of the world and your perspective,” Outen says of her earth roaming. It may seem counter-intuitive, but she says life on the move “has helped me to become more balanced, more settled.”

Justine Curgenven’s documentary of the Aleutians journey is available now at www.cackletv.com. 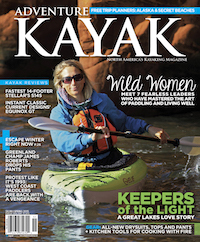 This article first appeared in the Spring 2015 issue of Adventure Kayak Magazine as part of a feature on women in kayaking. For more great content, subscribe to Adventure Kayak’s print and digital editions here.