They appeared like hundreds of rambunctious little Yodas bobbing and barking with bad coughs, snubbed snouts and short, knobby ear flaps pointing east and west, but these gregarious northern fur seal pups were super curious crowding around our kayaks at Point Bennett, the far northwestern tip of San Miguel Island in the Channel Islands National Park, near Santa Barbara, CA.

You’re never really alone when paddling around the third largest isle in the national park, especially with the pinniped rookery at Point Bennett being the largest in North America with up to 50,000 animals at any time during the year. Five species of seals and sea lions use the windswept isle for pupping and hauling out, and we were greeted at every beach, cove and rock outcropping by choruses of yelps, barks and bellows long and loud. 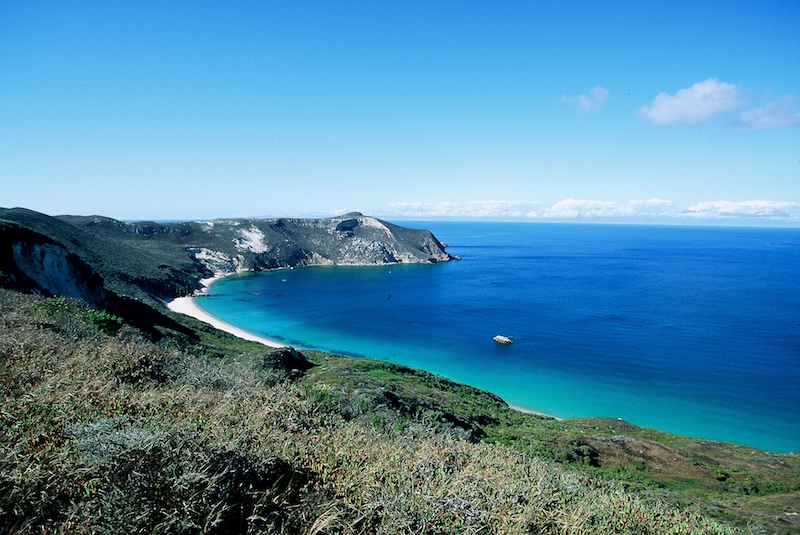 As myself, Danny Trudeau and Craig Fernandez circumnavigated the two westernmost islets in the national park, we approached each patch of sand with anticipation as congested beaches of seals and sea lions dispersed.  Their curiosity would get the better of these marine mammals as they strained their necks to see what the low down was with the sleek paddling kayakers.  Yearlings were especially curious as they torpedoed toward our kayaks for closer inspection.  Many stayed with us porpoising along as we paddled around an island steeped in natural history.

San Miguel Island was the first island off the California coast visited by Portuguese explorer Juan Rodriguez Cabrillo in 1542.  While sailing up the coast of New Spain under the Spanish flag, Cabrillo would’ve encountered lots of wildlife around San Miguel Island. There’s a monument devoted to Cabrillo overlooking breathtaking Cuyler Harbor, one of the most picturesque natural anchorages in the national park.

After we left Cuyler Harbor and glided west around Harris Point we picked our way through the surf over several shallow reefs.  We also crawled across dense canopies of giant bladder kelp and legions of pelagic red crabs stroking just below the surface.  Castle Rock loomed northwest off Simonton Cove as we headed for the wave-battered crags of Point Bennett.

On at least one map the region is known as “Shark Park,” and the subject of spotting a great white shark occasionally crept into our conversation, hovering like a dark cloud.  However, with so much prey surrounding San Miguel Island, what were the odds of actually seeing something?  Great whites have a lot of choices on the menu surrounding San Miguel Island; rowdy California sea lions, playful northern fur seals, lazy harbor seals, massive northern elephant seals and thick-necked stellar sea lions.  There were definitely some reefs and headlands that felt sharkier than other locales; deep, dark water, poor visibility and lots of seals and sea lions in the water.  Yet as we rounded Crook Point, Santa Rosa Island loomed on the horizon to the east, and we focused on the channel crossing with a steady southeast headwind more than any big fish encounters.  Now only a four-mile paddle across the San Miguel Passage separated us from the second largest isle in the archipelago. 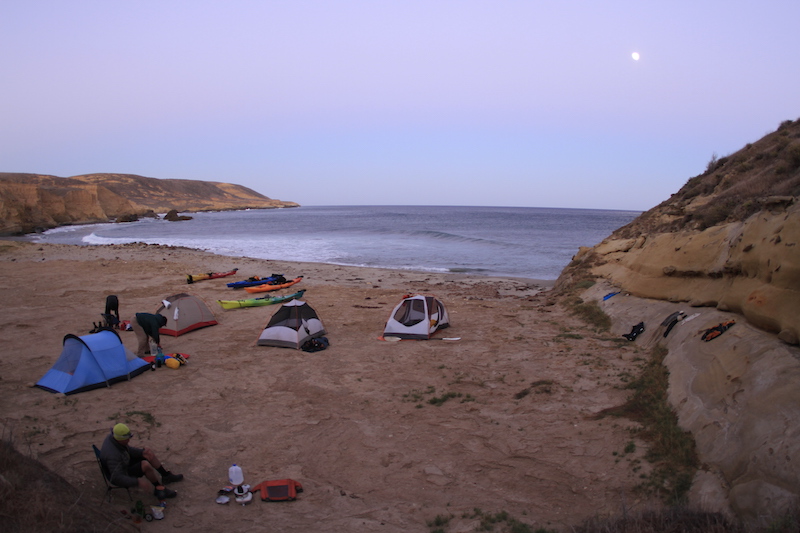 That night on a sliver of a beach near Sandy Point on the west side of Santa Rosa, the incoming tide nearly swamped our tents and kayaks.  I watched the tide creep within a few feet of my tent and peak just beneath our gear-laden kayaks in the middle of the night.  The perpetual northwesterly winds were a whistling 30 knots as we curled up in our sleeping bags.  At that point I wished to be like an elephant seal. The cold water and piercing winds cloaked them in stinging sand, but they never budged and barely showed a care in the world.

Why Arlington Canyon?  Two femurs were discovered there in 1959 by a Dr. Phil Orr.  They are the oldest human remains found in North America at 13,200-years-old.  Arlington Man had lots of canyons to choose from, but Arlington Canyon is a pretty sweet spot, and I could see why he lived there.  He had a year-round, freshwater stream that led down to a freshwater marsh.  The marsh was protected by a sandy berm and a flotsam of gnarled kelp and bleached driftwood.  The sea terrace above the berm offered a fine vantage point.  His diet consisted of fish, shellfish, seabird eggs and seals and sea lions.  Life was good for this Paleo Indian or Chumash Indian depending on who you speak to. 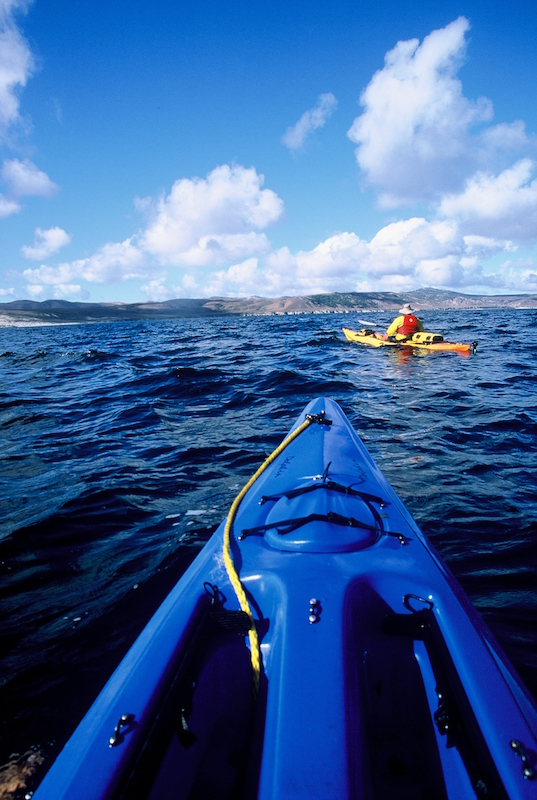 What happened to Arlington Man remains a mystery.  Clues to his demise remain elusive, but the search continues.  The dig site has been continually probed, and when Arlington Man thrived on Santa Rosa Island, sea levels were much lower, meaning more clues potentially await beneath the sea.  So far underwater mapping hasn’t revealed anything astounding, but one thing remains clear; Arlington Man was some kind of paddler.  He was part of the mass migration from Asia to North America, and somewhere along the way the Channel Islands came into view and stoked his interest.

Today the channel crossing is about 32 miles from what is now Santa Barbara.  Back then it was at least half the distance.  At the very least he used willows and deer sinew to construct some sort of watercraft, but some archeologists have suggested Arlington Man built something more elaborate and seaworthy to make such a crossing.

After we landed our kayaks on the deserted beach, we made a short hike up Arlington Canyon for some water.  The most reliable spring was just beneath the dig site in the narrow draw, that persistent California drought almost sucking the life out of the canyon.

However, Arlington Man would be pleased to know that his island remains virtually intact, and that his water craft would still paddle him around one of the most diverse islands off the California coast.