Ready for adventure? We’ve roamed the world’s oceans and lakes to compile this look at eight of our favorite island escapes, from lounging in the palm trees of the South Pacific to paddling with whales in the Bay of Fundy and gazing at grizzlies in Alaska. We’ve also included one escapade that’s so daring, it may never be repeated.

Tears streamed down my face. Through the fog I watched the faint outline of my two companions moving further and further away from me with each passing hour. I battled with every stroke, struggling to stay awake, my mind exhausted and my hands numb with cold.

For centuries, explorers and dreamers have been drawn to the icy waters and barren landscapes of the Arctic. Inspired by romantic no- tions of the Land of the Midnight Sun, where polar bears roam across ice and tundra and glaciers plunge into the ocean, early adventurers journeyed on quests ever further above the Arctic Circle. Many of those bound for the North Pole departed Svalbard, a cluster of isolated islands anchored roughly midway between mainland Norway and the pole. Time passed, and although those pioneering days slowly faded into history, the magnetic attraction was not lost. It was deep inside of me.

So, on a foggy day in late June 2015, Jaime Sharp, Per Gustav (“PG”) Porsanger and I left on our own quest—to paddle more than 2,000 kilometers around the four main islands of Svalbard. The route around this desolate Arctic archipelago was, despite the passage of time, a circumnavigation that remained unclaimed.

Seven years earlier, two paddlers—Alon Ohad and Tim Starr—set off from the colorful settlement of Longyearbyen on the largest island, Spitsbergen, and paddled north, their kayaks loaded with what they hoped would be enough supplies to get them around the first-ever circumnavigation of the archipelago. Passing tumbling glaciers and windswept landscapes they worked their way towards the 80th parallel. On the coast of Nordaustlandet—the northernmost island and the crux of the circumnavigation, guarded by a 160-kilometer stretch of glacial cliffs and the highest numbers of Svalbard’s infamous polar bears—they were trapped in sea ice. After five hours of hauling their 200-pound kayaks across the shifting ice mass, a back injury forced the pair to call for an evacuation.

The second major attempt followed two years later. Two young Norwegians—Sebastian Plur Nilssen and Ludvig Fjeld—struggled north, battling the strong winds that funneled out of the mouths of the archipelago’s massive fiords. Two weeks in, they burned a pile of their food supplies to lighten the load and increase their speed. Then, after 24 days, their journey came to an abrupt end. While they were sleeping, a polar bear crawled under their trip wire, ripped through the tent and grabbed Sebastian’s head in its jaws. Ludvig shot the bear, likely saving his friend’s life. After a rescue helicopter delivered Sebastian to Longyearbyen for surgery, he spent three months in the hospital recovering from a punctured lung and extensive injuries to his chest and shoulder.

The incident cast a pall on the circumnavigation, and for the next five years the coastline remained silent. It was clear that in order for us to succeed, we needed a team of at least three. That way we could maintain a bear watch roster, with one of us staying awake and on guard at all times.

The crunching of my bow slicing through bands of brash ice awoke me from my thoughts. Somewhere beside us, the occasional booming of glaciers slowly faded into an eerie silence. It had been damp for days and I longed to escape the fog and paddle in the glistening sunshine again. 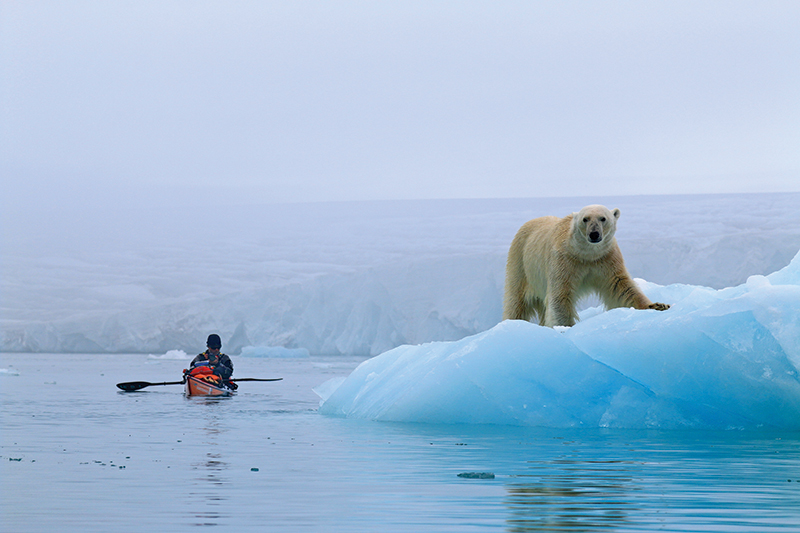 That evening, camped on a small island, I climbed a hill behind our tents. A few hundred meters away, a polar bear roamed over a ridge. It paused and looked at me for a moment before continuing away from our camp. For as far as I could see, the ocean was covered in sheets of broken sea ice with thin veins of water between.

As a team we were walking on equally unstable ice. Conflicts in personalities, paddling speed and goals created an uncomfortable tension that I struggled to shake. I had never expected that the competitive and controlling tendencies of someone else could affect my self-esteem so drastically.

On past journeys, paddling alone around New Zealand and Vancouver Island, I’d found inner contentment and a total sense of happiness. I en- joyed taking on challenges alone and the sense of satisfaction that came with succeeding was both empowering and humbling. I was left feeling a stronger, more confident person for it. But on this cold polar night I sat huddled by a small fire, tears rolling once more down my face. Never before had I felt so low in such a wild and beautiful place.

I hung onto the hope that when this journey was over, I would remember the splendor of camping on tundra alive with wildflowers, herds of reindeer roaming nearby, and the exhalations of beluga whales breaking the silence. Morale was low, but there was still beauty all around us. It was the one thing that kept me going. That, and the fact that there was no other option than to keep going.

Days were slowly becoming distinguishable from nights. The sun no longer moved in a halo above us. Instead, it swept the sky in a slow burning streak as it dipped towards the horizon. Soon, the land would be covered in a months-long blanket of darkness, the temperatures would plummet, and the sea would freeze into solid ice for the winter.

Our window was closing and we began paddling through the twilit nights in a bid to spend the few hours of dusk and darkness away from the bears. We were only a week’s paddle from Longyearbyen—just a few hundred kilometers away from closing the loop. Hour after hour, my paddle dipped in and out of the water. Rocky mountains and headlands slowly grew taller and then ever so slowly faded into the distance behind me. We crossed the mouths of wide fiords and bays backed by walls of calving ice. After nine weeks, it was as if nature wanted us to succeed. We had tiptoed lightly, and Svalbard had allowed us to pass. —Tara Mulvany