Sparsely populated and generally inhospitable, the West Coast challenges surf kayakers and advanced paddlers. Here, the Southern Alps, the 10,000–12,000-foot spine of the South Island,meet the pounding swell of the Tasman Sea and winds blow with unobstructed fury all the way from Australia.

It is a coast of contrasts, glaciers reach into lush rainforest and turquoise rivers tumble quickly to the sea.

THE WEST COAST: HOME OF LEGENDS

It’s hard to summarize Paul Caffyn’s many astonishing achievements, but most paddlers will recognize him as the first person to paddle around New Zealand, Australia, Great Britain, Japan and coastal Alaska, to name a few. He’s traveled over 23,000 miles by kayak. He is, in short, sea kayaking’s Sir Edmund Hillary.

He is also a casual, unassuming man who welcomes us into his modest home, appropriately perched 20 precarious feet above the sea. One rogue wave could easily flood his living room. When someone points this out, Caffyn casually sips his tea, staring out the sliding glass door into the choppy seas, and tells us that slowly the waves have indeed nibbled away at the cliff just beyond his back door. He seems to need the rhythm of the sea nearby, like a moth drawn to light. Books, opera posters, old photographs and paddling keepsakes crowd the walls of his home. I scan them, looking for clues as to the man behind the legend.

When we ask about his adventures, Caffyn smiles and corrects us, “I subscribe to the belief that adventure is what happens when things go wrong.”

His goal has always been to mitigate adventure and one of his favorite aspects of such massive undertakings as circumnavigating a continent is the planning and challenge of the logistics. I begin to see a calculated, reflective man who is comfortable by himself and at home on the sea.

FIGHT FOR – BUT ENJOY – THE LAND AND RIVERS

From Caffyn’s house we head north to Murchison, home of the New Zealand Kayak School, founded and owned by whitewater legend Mick Hopkinson. Mick’s first descents include Africa’s Blue Nile, Everest’s Dudh Khosi and many other rivers in Pakistan, Switzerland, Austria and New Zealand. He’s been inducted into the International Whitewater Hall of Fame and his school has earned international acclaim.

Piquant and just a little sardonic, Mick likes people who stay on their toes, not surprising for a man who loves linking moves in rough water. Now 65, he tells us he is considering taking up sea kayaking in his eighties. Teasing aside, Mick is a gracious host who cares deeply about the waters he paddles. Mick started his career as a slalom paddler in Britain, where it was illegal to kayak local rivers. Fishermen and farmers threw rocks at paddlers for trespassing, and slalom races provided his only opportunity to access the water.

Mick later fell in love with the free-flowing rivers of New Zealand and stayed. As he talks passionately about the future of his adopted country’s rivers and the “idiots” who want to dam them, I get the sense that he and Edward Abbey would have enjoyed sharing a beer. When I bring up the notoriously intractable author and polemic conservationist’s name, Mick smiles broadly and picks up a page tacked above his desk.

“One final paragraph of advice: do not burn yourselves out. Be as I am—a reluctant enthusiast… a part-time crusader, a half-hearted fanatic. Save the other half of yourselves and your lives for pleasure and adventure. It is not enough to fight for the land; it is even more important to enjoy it. While you can. While it’s still here…” he reads the quote in its entirety and smiles again. “I’m really just a hedonist, turned conservationist so others can be hedonists.”

TIPS FOR VISITING THE WEST COAST OF NEW ZEALAND

Take a class or rent whitewater equipment at Mick’s New Zealand Kayak School (www.nzkayakschool.com). Even if you’ve never paddled a river before, the school’s world-class staff teaches all skill levels from October through April. They can also organize helicopter shuttles to many of the West Coast’s remote access rivers. 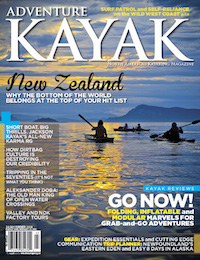