Perfect for day trips and light touring, each of these kayaks boasts comfort, versatility and efficiency.

Inflatable kayaks also offer great advantages with regard to storage and transportation.

[ View all inflatable kayaks in the Paddling Buyer’s Guide ]

Grab one of these boats and get on the water.

Take it to the next level with the all-new AdvancedFrame Convertible Elite.

A 15-foot kayak that can be paddled solo or tandem, the Convertible Elite combines aluminum rib frame technology in the bow and stern and rigid drop stitch technology in the floor to provide paddling performance that rivals a hard-shell kayak. 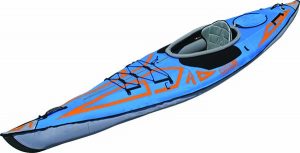 A truly hybrid inflatable kayak, the AdvancedFrame Expedition Elite incorporates proven aluminum rib frame technology in the bow and stern, along with a drop stitch floor, to provide optimal paddling performance and rigidity.

At 13 feet long, with plenty of storage space, the Expedition Elite is a perfect kayak for any adventure. 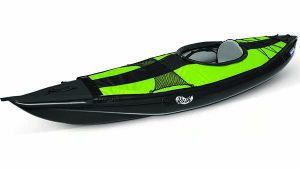 The Kayak Rush 1 features innovative construction and further developed drop stitch technology (hydrodynamic formed bow and stern) and is suitable for recreation on calm lakes, close to shore paddling, and for rivers up to class II. Optional accessories include rudder and removable deck. The Rush’s advantages include versatility, speed and stability. 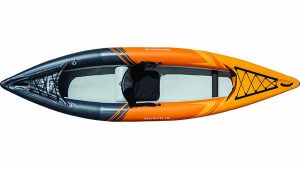 Named after the famous Deschutes River in Bend, Oregon, the Deschutes Series of kayaks are just as rugged and diverse as the river itself. Designed and built to withstand the rigours of recreational touring, this versatile line of inflatable kayaks inspires confidence. Duratex construction coupled with FeatherFrame EVA floor offer rigidity and lightweight, efficient performance. 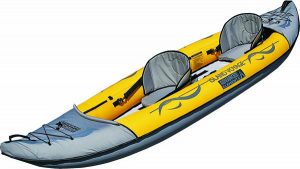 The Island Voyage 2 is a compact and durable recreational inflatable kayak equipped with several unique features that make it perfect for fun on the water. With a multi-layer construction, multiple grab handles, bungee deck lacing, high-back seats, and a pointed bow with rocker and tracking fin for enhanced performance, the Island Voyage 2 is ready for your next adventure.

Updated for 2020, this true touring kayak was lengthened to accommodate more room for you and your gear. The inflatable V hull features a removable skeg and is more stable and comfortable than ever, plus it offers greater load capacity. Get away from it all for some quality time on the water. It’s perfect for a day of light touring or even an extended lake camping adventure.

A lighter, narrower, sleeker, faster to paddle and higher-performance solo kayak for the adventurer. The world’s first all drop stitch, inflatable kayak, the RazorLite 393rl paddles up to six miles per hour, weighs just 35 pounds, inflates in seven minutes and holds one person or up to 500 pounds. Tracks straight and true for easier, smoother paddling. Includes the FlexBrace Foot Rest with 20 adjustable positions. 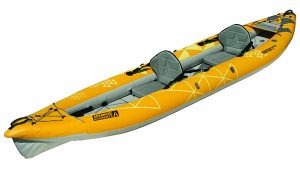 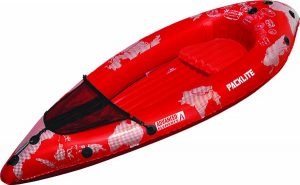 Weighing in at four pounds, the PackLite Kayak is designed to be an extremely compact and lightweight recreational inflatable kayak with several unique features to make it the perfect ultralight kayak for paddling in the most remote locations. It has three chambers for optimum safety and packs down to the size of a handbag. Paddling a remote alpine lake or stream has never been this easy.

The AdvancedFrame is a hybrid of a folding frame kayak and an inflatable kayak. Utilizing built-in aluminum ribs in the bow and stern, it slices through water like a knife and rivals the trackability of hard-shell kayaks. The stern acts as a skeg, increasing the tracking performance. It uses extremely durable materials and features many high-end components.

A 2018 OutDoor Industry Award-winning design, the AirFusion EVO is unlike any other inflatable kayak on the water. The first of its kind, the AirFusion EVO’s unique design is a fusion of aluminum frame poles, high-pressure drop stitch air chambers, and a fully enclosed outer polyurethane skin, which results in a streamlined high-performance kayak that tracks like a rigid hard-shell. 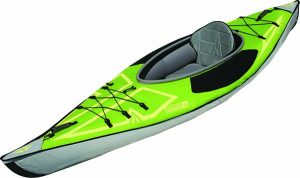 Utilizing aluminum rib frame technology in the bow and stern and ultralight materials in a three-layer construction, the AdvancedFrame Ultralite is a high-performance kayak with superior hull speed and tracking in a 17-pound package. Fully featured, with items like d-rings, foot bracing, paddle guards and bungee deck lacing, this kayak is well equipped for your next ultralight adventure.

Kayak Buying Guide: How To Find The Right Boat For You