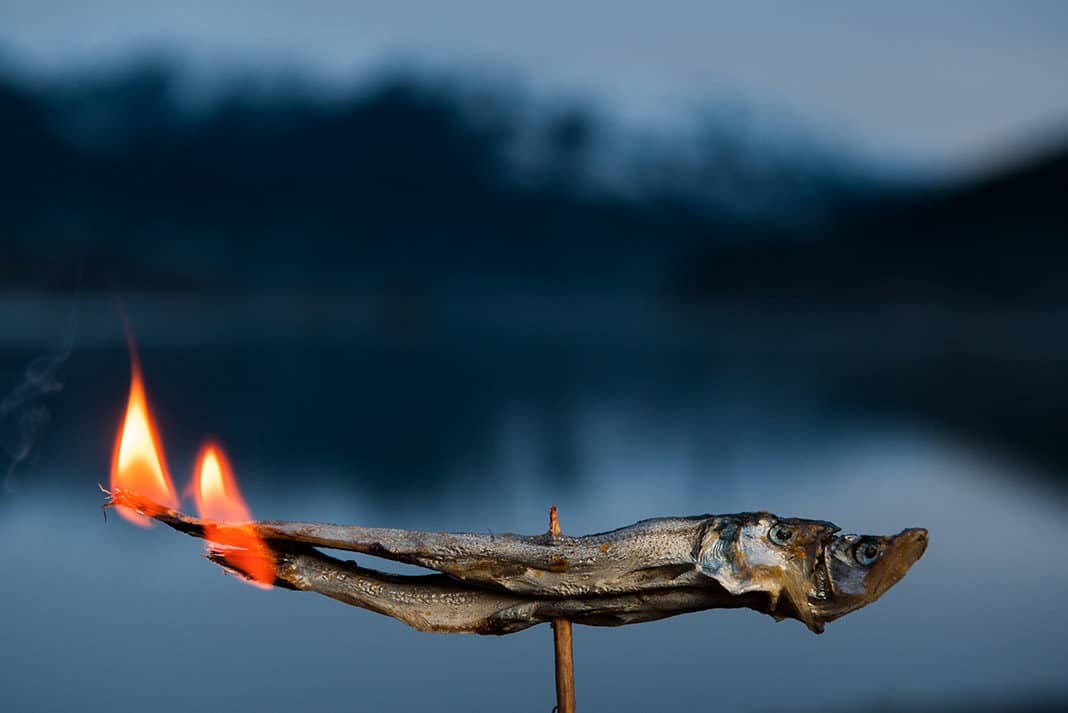 These intertwined, sun dried, and ignited fish are part of the last great eulachon fishery on the West Coast

For generations, fishermen from the Nisga’a First Nation have gathered at the mouth of the Nass River in northwestern British Columbia to prepare for the eulachon’s arrival each March. Eulachon, a small herring-like fish, spend the majority of their lives in the ocean, but they return to their estuarial birthplaces to reproduce.

The eulachon returned to the rivers at a time when some indigenous communities were on the brink of starvation due to their food stores running low after a long, harsh winter. The arrival of the eulachon was the first source of fresh protein large enough to feed an entire village. And following the eulachon were seals, sea lions, and clouds of gulls, all of which were hunted for food. It was like a supplemntal buffet delivered to their doorstep at their greatest time of need.

For saving the lives of many, they came to be known as the salvation fish

Archival photos from the late 19th century show row after row of canoes lining the shore of the Nass River in preparation for the harvest. Working in teams of canoes, the fishermen set nets in the middle of the river to catch the eulachon as they were swept out with the tide.

Eulachon were eaten fresh, sun-dried, and smoked. But by far the most crucial eulachon product was its oil. Eulachon’s bodies are 15-20 percent fat—so oily that when dried, they can be lit like candles. Indeed, they were at times used as short-burning candles, earning their other name, candlefish.

Indigenous communities all along the coast would render this nutritious oil by crushing and boiling the eulachon. Once the slurry of water and fish cooled, the oil was skimmed from the top. Rendering the oil allowed communities to preserve and trade this food throughout the year. Known as “grease” or “liquid gold”, it was widely traded on “grease trails”—trade routes which some of our highways still follow today.

While eulachon were once found in abundance from northern California to Alaska, since the 1990s they have suffered a severe decline, disappearing from many rivers. The reason for the decline remains a mystery, but the suspects are trawling by-catch, spawning ground degradation and a changing ocean climate.

The Nass River, however, has maintained a strong run of eulachon and the Nisga’a fishermen continue the tradition, trading oil with communities who have lost their eulachon. For generations, eulachon have saved the lives of many, but now that the table has turned, can we save the salvation fish?