Getting To Know The Parts Of Your Kayak

Every sport has its jargon, and kayaking is no exception. The parts of a kayak have specific names and it helps to learn them as you’re exploring the world of paddlesports. Some words will likely be familiar to you because they’re borrowed from general nautical terminology. Others may be new or confusing. Either way, learning a few kayak-specific terms will help you as you navigate the vast world of kayak models and options.

Basic parts of a kayak

The front of the kayak.

The rear of the kayak.

Top side of the kayak.

Bottom side of the kayak.

The keel or keel line is the center line of the hull of the boat. If you’re looking at the hull, the keel line runs right down the middle from bow to stern. 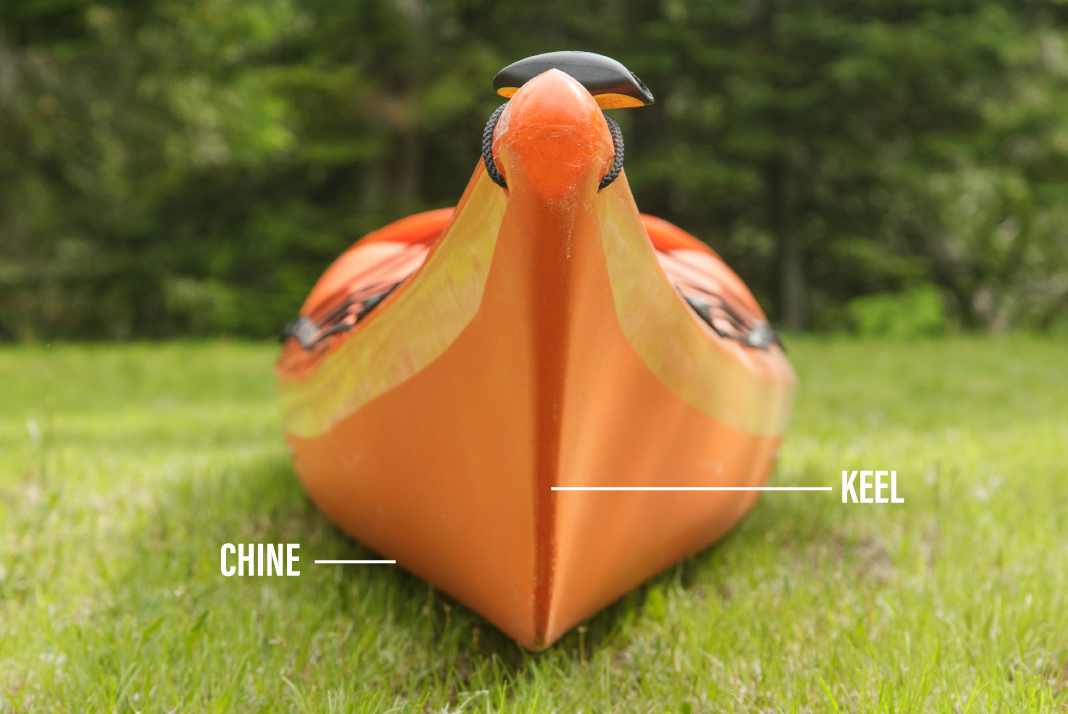 Plan view is the shape of the kayak when viewed from above or below. Some kayaks have a symmetrical plan view, others are wider toward the bow or stern.

Sheer is the upsweep of the bow and stern above the waterline.

Rocker is the upsweep of the keel line toward the bow and stern of the boat. A boat with lots of rocker has a banana-shaped keel line. A boat with no rocker is flat from bow to stern along the keel. More rocker makes a kayak turn easier. Less rocker improves tracking and speed.

A variety of attachment points on the deck of the kayak that hold deck elastics or decklines.

A bar or loop that can be used to lock the kayak to a rack or other secure object.

Handles at the bow and stern of the kayak for comfortable carrying.

Small diameter bungee cord for holding maps, water bottles or other accessories on the deck of the kayak.

All kayaks have a place for the paddler to sit. Seats can be basic or elaborate. Some seats have tall backrests like lawn chairs that provide lots of back support. Others have minimal backrests that promote easy rolling and effective forward paddling.

Foot rests, foot braces or foot pegs give you something to push against in the kayak. This helps you sit upright and keeps your back comfortable. Foot rests also help transfer power from the paddle and paddler to the kayak.

Parts of a sit-inside kayak

Sit-inside recreational kayaks, sea kayaks and whitewater kayaks have specific parts that improve performance and comfort. Some of the most common terms for sit-inside kayak anatomy are outlined below.

The cockpit is the opening where the paddler sits in the kayak. Cockpit openings can be large, as in recreational kayaks, or smaller, as in whitewater or touring kayaks. Smaller cockpits provide a more secure fit for bracing and rolling. Larger cockpits are easy to enter and exit.

The cockpit coaming or cockpit rim is the raised rim around the outer edge of a cockpit. The raised edge allows the fitting of a sprayskirt to keep water out of the kayak.

Bulkhead foot braces are specialized foot rests found in whitewater kayaks. Bulkhead foot braces form a solid wall across the kayak with no space at the edges. The paddler may place their feet anywhere on the bulkhead for comfort and support. This type of foot rest offers more safety and comfort in difficult whitewater.

Hip pads are removable shaped pads that fit on the sides of the seat. Hip pads allow a paddler to customize the width of the seat so they won’t shift from side to side while edging or bracing. Hip pads are common on whitewater kayaks and sometimes seen on sea kayaks.

Toggles stick off the end of a sea kayak and are attached with a piece of accessory cord. They’re different than carry handles, although they can be used to carry a kayak. The main purpose of end toggles is to give kayakers a safe place to hold onto their kayak should they go for a swim and need to be rescued.

Deck lines are rigid ropes rigged around the perimeter of a sea kayak deck. They give kayakers something to grip while emptying a sea kayak during deep water rescues.

Commonly found on sea kayaks. A depression in the deck for mounting a sailboat-style piloting compass.

Retractable skegs are found in sea kayaks, hybrid whitewater kayaks and some recreational kayaks. Skegs are fins that sit in a slot in the underside of the hull near the stern of the boat. They can be dropped into the water to improve tracking.

A skeg slider is mounted near the cockpit and controls how deeply the skeg is deployed into the water. Sometimes a simple rope and jam cleat.

Rudders are used to steer kayaks and control their course in the wind. Movable foot braces control the rudder. Most rudders flip up onto the deck for launching and landing. Common on sea kayaks.

A rudder uphaul is a rope or lever used to pull the rudder up or down for launching and landing. Mounted near the cockpit.

A backband is a low backrest common in whitewater kayaks and some sea kayaks. A backband helps you sit upright in the kayak without interfering with upper body rotation during paddling.

Bulkheads are walls inside the kayak that separate the cockpit from the rest of the boat. Bulkheads create buoyancy and dry storage space inside a kayak. They also keep water from sloshing all the way from bow to stern during a rescue. This last feature of bulkheads makes them an important safety feature in sea kayaks.

Hatches are openings in the deck of a kayak that allow you to access the dry compartments formed by bulkheads. Hatches come in a variety of sizes and some are drier than others. Dry hatches are an important feature in sea kayaks.

A day hatch is a small compartment located directly behind the cockpit of a sea kayak that can be accessed by the paddler while on the water. The compartment is formed by adding a third bulkhead that separates the day hatch from the main stern flotation chamber. This prevents the stern of the boat from flooding if the day hatch takes on water while opened.

Thigh braces are fitted under the deck of a kayak near the cockpit rim. These contoured brackets allow a paddler to securely grip the kayak with his thighs and knees. Secure contact from thigh braces is essential for rolling and bracing. Thigh braces are found on whitewater and sea kayaks.

Some sea kayaks have special rigging on the back deck behind the cockpit to securely lash a paddle. This rigging is frequently used to facilitate self-rescue with a paddlefloat, which is placed on the extended end of the paddle to serve as a stabilizing outrigger.

Parts of a sit-on-top kayak

Sit-on-top kayaks are different from sit-inside kayaks in some key ways. Instead of sitting inside the kayak in the cockpit, the paddler sits on top of the deck. The deck may have hatches to access internal storage, but this storage space will be more limited than that found in a sit-inside kayak of similar size. Sit-on-top kayaks are popular for fishing and many angling specific features are common on these designs.

Find out about the kayak components specific to sit-on-tops below. 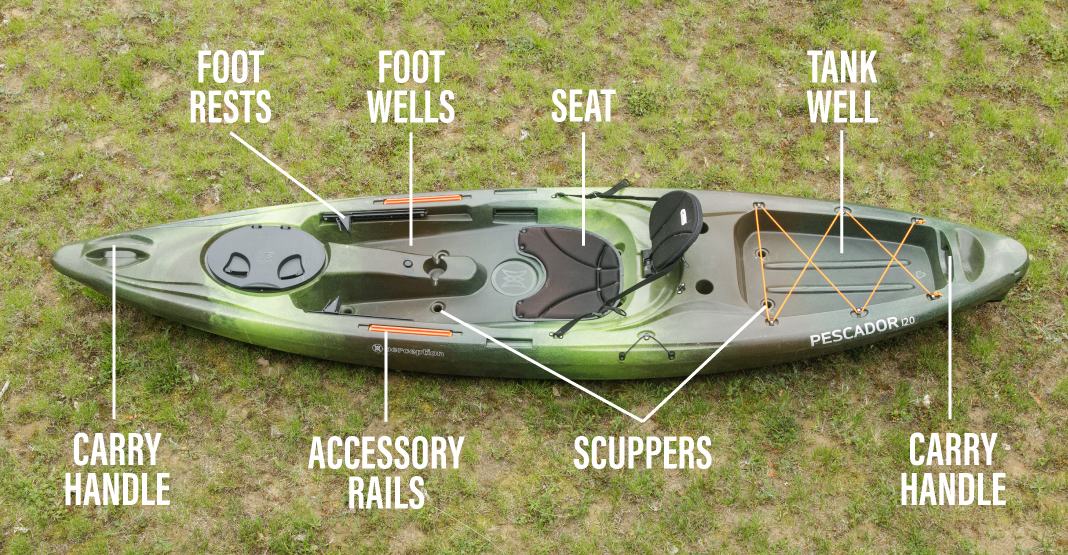 Scuppers are holes that go from the deck of a sit-on-top kayak through the hull. They’re sealed so water can’t enter the inside of the hull and allow any water that splashes onto the deck to drain back out of the kayak. Scuppers do allow water back up into the kayak from below, so in cold water some paddlers choose to close them with scupper plugs.

Footwells are molded foot braces found in basic sit-on-top designs. A series of bumps are molded into the deck of the kayak and the paddler chooses the one closest to their preferred foot position.

Found on many fishing kayaks, high-low seats allow the paddler to position the seat higher or lower above the water. The high position is favored for fishing, while the low position offers better stability in rough water.

Some sit-on-top kayaks feature a propeller or flipper-style pedal-drive that allows the paddler to propel their craft using their legs rather than a paddle. Pedal-drives can be removed from the kayak for transport or conventional paddling.

Many kayaks have molded-in rod holders that allow you to slide the butt of your fishing rod into a recess in the deck of the kayak.

Accessory rails are common on fishing kayaks. They allow for easy customization for the kayak angler who wishes to add rod holders, fish finders and other accessories to their kayak.

A tankwell or deckwell is a depressed area in the deck of the sit-on-top kayak near the stern. A true tankwell is molded to fit a scuba tank, but many wells are configured to fit fishing accessory crates or large drybags.