For avid kayakers, few debates are as popular—or as polarizing—as the controversy over skeg versus rudder. Which system is easier to use, more effective, more efficient, more reliable—in a word, which is better, a kayak skeg or rudder?

Like all great debates, however, there really is no right or wrong answer. Both rudders and skegs have their merits and their limitations. Kayak design, paddling style and wind and water conditions all play a role in which system will perform the best. Ultimately, paddlers have to make their own decisions based on need and personal preference.

Novice kayakers often have questions like, “Do you need a skeg on a kayak?” or “What is the purpose of a rudder on a kayak?” If you are new to kayaking and wondering what the difference is between a skeg and a rudder—or how each affects a kayak’s handling and performance—read on. We’ll look at the purpose of skegs and rudders, how they work, and the pros and cons of each system.

What is the purpose of a kayak skeg or rudder?

First and foremost, the primary purpose of both skegs and rudders is to aid in tracking, meaning the ability to run in a straight line without using your paddle to make major correction strokes.

In ideal conditions, well-designed sea kayaks and recreational kayaks should track well without a skeg or rudder. But even the most well-behaved, straight-tracking kayak can start to wander off course when you add in the dynamics of wind, waves and weight distribution. The most common phenomenon is called “weathercocking.”

Weathercocking works like this: crosswinds and quartering winds push your kayak sideways. If you are sitting still, your kayak will simply drift sideways. But when you start paddling forward, the bow of the kayak cuts through the water and is held in place by the pressure from its bow wake. Behind the paddler, there is less pressure on the stern of the kayak, leaving it free to keep drifting sideways. The upshot: your kayak turns into the wind. 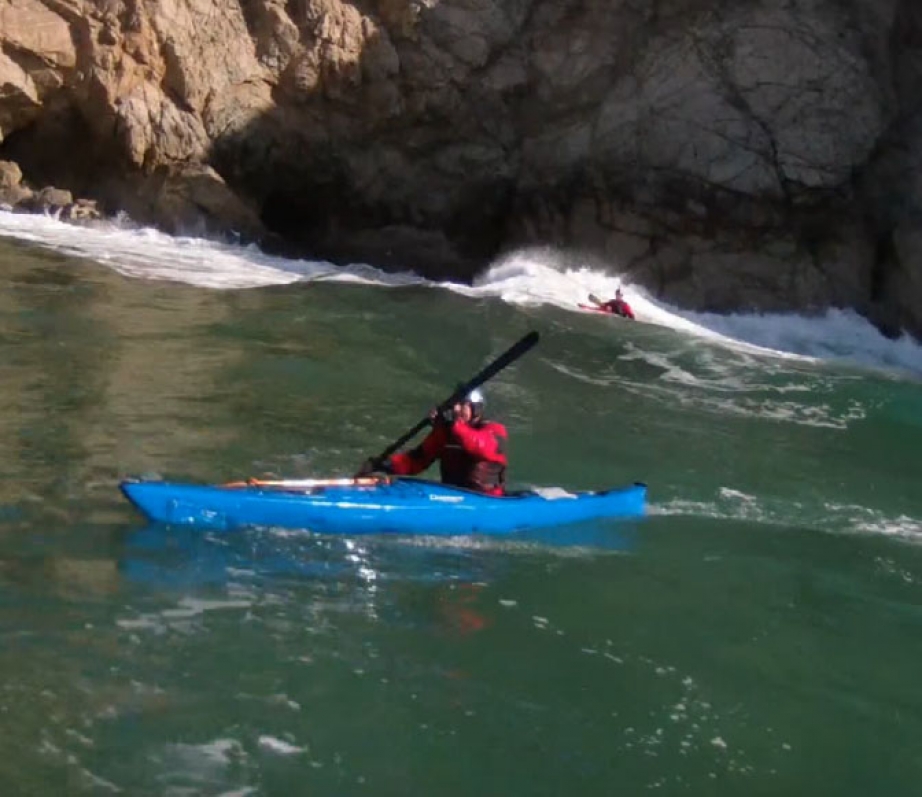 Paddling in following seas can be just as problematic. When the wind and waves are at your back, the bow of the kayak tends to bury in the wave troughs, while the stern rises and is pushed sideways by the faster-moving wave crests. This tendency to turn sideways to following waves is called broaching.

Unless you are paddling directly into the wind, your kayak will require some correction to compensate for weathercocking or broaching.

Without a skeg or rudder, the paddler can only counteract the kayak’s tendency to wander in the wind by edging and making corrective strokes. But constantly battling to maintain your course by endlessly sweeping on one side or trying to hold your kayak on edge for extended distances can be inefficient and punishing to your body. This is where a skeg or rudder can play a valuable role in kayak control.

What is the difference between a skeg and a rudder?

What is a skeg on a kayak?

A skeg is a retractable fin that drops out of a slot in the kayak hull near the stern. The skeg fin cannot move side to side, but its depth can be adjusted up and down by means of a control slider, cleat or knob beside the cockpit.

A skeg works by changing the bow-to-stern trim of your kayak—in essence, it makes the slippery stern sit deeper in the water, by adding surface area below the waterline, and helps lock it in place. By adjusting the depth of the skeg fin, a kayaker can balance out the forces of wind or current on the kayak, enhancing tracking and making it easier to hold course.

VIEW ALL KAYAKS WITH SKEGS

What is a rudder on a kayak?

By contrast, a rudder has a stern-mounted blade that pivots side to side, controlled by foot pedals in the cockpit that are connected to the rudder blade by cables or line. In this way, a rudder allows for steering with your feet. How do you steer a kayak with a rudder? It’s pretty intuitive: push with your right foot, turn right; push with your left, turn left. Most kayak rudders can be flipped up out of the water via haul lines and tucked against the deck when not in use.

VIEW ALL KAYAKS WITH RUDDERS

Paddling with a skeg

So, when it comes to a kayak’s performance, how much does the skeg help? Beyond the ability to help your kayak paddle straight in wind and current, skegs can also add versatility to kayak design.

Many recreational paddlers want a kayak that is efficient and tracks well, but is also responsive and maneuverable. Yet, as any kayak designer will tell you, tracking and turning ability in kayak design is a compromise, trading more of one for less of the other. Incorporating a drop-down skeg allows designers to build more versatile kayaks by blending playful, maneuverable hulls with on-demand tracking.

How to use a kayak skeg

As mentioned above, even a well-designed kayak will turn into the wind (weathercock) when the skeg is up. But if you lower the skeg fully, chances are you’ll overcompensate, moving the kayak’s trim too far toward the stern. Now your kayak will start turning away from the wind.

Instead, you’ll want to slide your skeg down a little at a time, until you are able to hold course without any extra correction—or frustration. Throughout your paddle, you can make subtle skeg adjustments as required to trim the kayak to suit variable conditions.

Pros and cons of skegs

Paddling with a rudder

Given the popularity of skegs on sea, surf, river and recreational kayaks, you may be wondering just when does a kayak need a rudder? One common misconception is that rudders are most helpful for novice paddlers. In fact, the usefulness of a rudder has more to do with the type of kayak, and its intended purpose, than it does with the skill level of the person paddling it.

Where appropriate, the main advantage of a rudder is that it allows paddlers to effectively steer the kayak by foot, without the need to interrupt or modify their forward stroke. This means that you can focus all your energy into powering forward, maximizing speed and distance. For this reason, the vast majority of competitive racing kayaks and go-fast surf-skis are designed to be paddled with a rudder. Many renowned expedition sea kayakers also choose a ruddered kayak for the same reasons.

Because they can assist with steering, rudders also aid in maneuvering kayaks that are inherently less maneuverable—for example, long tandem sea kayaks or wide, stable fishing kayaks. Finally, rudders are useful to control boat drift and direction when a kayaker’s hands are occupied with something other than paddling—such as fishing or sailing.

How to use a kayak rudder

If rudders are most effective on larger kayaks and racing and expedition designs, why are they so commonplace on general touring kayaks and entry-level boats? Unfortunately, in some cases, rudders are used to cover up poor designs and compensate for lackluster hull performance.

Too often, beginners are encouraged to rely on rudders to quickly gain control over their kayaks, even though this over-dependence will likely slow skill development. Remember, just because a kayak is equipped with a skeg or rudder, doesn’t mean you have to use it all the time!

When conditions are fine and the wind calm, there’s simply no need for the average recreational paddler to deploy a rudder the minute they leave shore. Of course, when you are paddling in crosswind, waves or current, a rudder can be used similar to a skeg to help you stay on track.

Pros and cons of rudders

Skeg or rudder: which should you use?

When it comes to the debate of which is better, a kayak skeg or rudder, the answer is: it depends. Before choosing sides, you should decide what sort of kayaking you will be doing most often, and what are the environments where you will spend most of your time? Different kayak designs often suit one system better than the other.

Rudders work great on a variety of specialized kayaks—from surf-skis and fishing kayaks to tandems and sailing set-ups. A ruddered kayak is faster when racing, more efficient on long expeditions and helpful to beginners who are just getting the hang of paddling.

For many touring, recreational and sea kayakers, a skeg provides an optimal blend of tracking and maneuverability, enhancing versatility in a broad range of conditions.

If you are still unsure whether a sea kayak rudder or skeg is the way to go—not to worry. Most kayaks come ready from the manufacturer with the system that best suits their design. Some skeg-equipped sea kayaks are also “rudder-ready” so you can order them with an optional rudder, or choose to add one later. It’s also worth noting that many sub-14-foot kayaks have neither. These boats are skeg- and rudder-less by design, since they are already exceptionally maneuverable and aren’t intended for cranking out serious miles in windy conditions.

Above all, don’t worry too much about what equipment you “should” or “shouldn’t” use. Remember that you don’t need a rudder or skeg to enjoy kayaking and paddle efficiently. Learn good paddling technique so you know how to control your kayak without a skeg or rudder. That way, if your skeg jams or your rudder cable breaks, you won’t be completely lost at sea.