Top gun performance without the yikes!

Narrow hulls, hard chines, generous rocker profiles and tight outfitting are the norm these days for high-end performance touring boats. Oh sure, the real top guns of paddling have the skill and confidence gained from logging hundreds of hours in the cockpit, they can make these designs dance. However, the true testing of a new hull design is done in the hands of weekend pilots who’ve just earned their wings. The all-new sixteen-foot, four- inch Boréal Design Fjord is specifically designed for intermediate fighter pilots.

The Fjord’s semi-arched hull offers a stable plat- form that smoothly rolls from one side to the other and banks from edge to edge for quick adjustments in direction and confident carving on surf waves. One of the overall smoothest handling boats we’ve reviewed.

The long waterline keeps you tracking straight and, teamed with the reverse hard chine, the Fjord is a quick turner. Boréal Design, explains their reverse hard chine: “On conventional hard chine kayaks the chine runs parallel with the seam. On the Fjord the chine tapers downward towards the bow and the stern. This design feature makes the kayak more manoeuvrable when compared to convention- al chine kayaks because the reverse chine forms a curved keel line at the bow (or stern) thus the kayak only needs a lean [approximately] 15 degrees to immerse the chine and begin to turn.”

With the Fjord you get more turn for less tilt. You get hard chine performance without hanging it out there.

The Fjord bridges the gap between the smaller light touring (women’s kayak) Pakesso [reviewed Adventure Kayak online V2I2] and their expedition boat, the Ellesmere. You also have the option of fibreglass, Kevlar or carbon lay ups. You can upgrade to include a day hatch. And, Boréal specs out the Fjord with either a Brit skeg and rubber hatch trimming or the less traditional North American rudder and recessed hatches and covers.

With every exciting performance sea kayak sent to Adventure Kayak mission control we wait with incredible anticipation as our intermediate and novice test paddlers splash down. With clipboards in hand, like NASA engineers, we typically log feedback like “tippy” or “it doesn’t go straight” and “I can’t turn it”. But not the 2004 Boréal Design Fjord; this crew of testers were all smiles. Houston, we are a go. 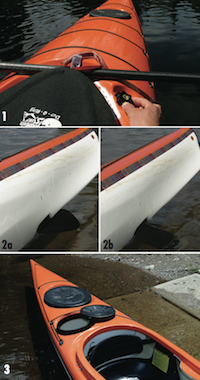 1 View from the cockpit

In case you were wondering, the view from the cockpit of the Fjord looks like this. Ahead of the cockpit rim is a moulded-in paddle rest. Handy! The innovative skeg dial is recessed flush to the deck and easily reached by all sizes of paddler. However, anything but the first deck bungee is beyond the grasps of the all but lanky Neanderthals. Seldom did water crash over the bow; if it did it whooshed away smoothly; no splash, no mess. The skeg version of the Fjord comes equipped bow and stern with watertight Kajak Sport hatches over ABS rims.

2 Onboard altimeter… for the skeg

The Fjord’s skeg is connected to the deck-mounted dial with a spectra cord. The numeric scale surrounding the dial corresponds to the depth of the skeg. Three or so drops the skeg to about a “normal” running height: cranking the dial to maximum power (“but the ship, she’s breaking up Captain”) lowers the skeg further into the water; according to Boréal, deeper than most of their competition’s kayaks. We found two-and-half or three about the best position; any lower and the Fjord was so stable it lost its smooth sporty handling.

Our skeg version test model came equipped with the 8-inch round day hatch option ($255) and 9.5-inch round bow and 15 X 10.75 oval stern Kayak Sport hatches—not a drop of water got through them. The Boréal Design moulded seat fit everyone and offers a great base to glue custom foam out- fitting. With such a deep boat, the thigh braces were miles higher than the tops of our legs requiring raising the seat or, more likely, foaming down and shaping them to fit the tops of your thighs [see “The Perfect Fit”, Adventure Kayak online V3I2]. The Fjord is such a nice handling boat you’ll want to be outfitted to carve turns. We’re also a big fan of real back bands in sea kayaks. The Beluga back band is simple, fits in your lumbar region, and sup- ports your body without riding up or falling down. 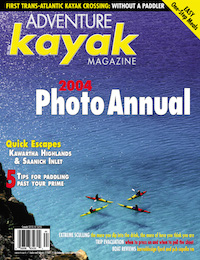