Since having kids, my wife and I have taken our family on a canoe trip every year. And so we find ourselves with all the cooler-toting anglers, moose hunters and other parents of young children in need of a Really Big Canoe. There are fewer canoes in the three-seater, R.B.C. category, so it’s no surprise  that we stumbled upon what is likely the most popular of the bunch: the Souris River Quetico 18.5.

While many classic, flatwater tripping canoes built in the Boundary Waters tradition are racing-inspired—long and narrow—Souris River founder Keith Robinson decided to take a different approach when he started canoe building in Atikokan, Ontario, a quarter-century ago.

Robinson is an ex-racer who knew all about sharp entry boats, says Souris River sales manager Wayne Docking, “but he didn’t want to build them.” Robinson aimed more for the optimum all-arounder, “the ultimate tripping canoe” comfortable, durable, and very novice and outfitter-friendly.

The Quetico 18.5 joins the family

The Quetico 18.5 is the longer, wider cousin of the best-selling Souris River Quetico 17 canoe. Docking describes the Quetico 18.5 as “middle of the road,” an “ideal compromise between stability and speed.”

“It’s a mum, dad and two kids kind of boat. It’s a family boat,” confirms Docking, describing my needs to a T. “The outfitters really like it for that reason plus they can put a couple 260-pound bass fishermen in it. If you’ve got big bodies, lots of packs and a few cases of beer, you put them in an 18.5. It’s very, very stable.”

Outfitters account for about half of Souris’ sales, and it’s common to find used Quetico 18.5 canoes when outfitters clear out their fleets, although Docking cautions that one year of outfitting use adds up to a lifetime’s worth of normal wear and tear.

From what I can tell Souris River canoes are up to the abuse, built of aircraft-quality epoxy resin, heavy gauge aluminum and four full layers of Kevlar on the entire hull. So far my canoe displays exceptional build quality and durability and is living up to Docking’s claims that Souris River builds the toughest Kevlar canoes on the market.

Light when empty, heavy when full

With its wide, nearly flat bottom and straight sides, our family found the Quetico 18.5 also lives up to its reputation for stability.

The Kevlar construction makes it incredibly lightweight, well-balanced and a pleasure to carry. It also means it’s designed to be paddled loaded. Empty, it’s a leaf in the wind. Loaded, speed and handling are on par with what we achieved in our similarly shaped 17-footer, despite the larger load.

With just two inches of rocker—the same as the Quetico 17 despite the extra length and compared to four inches on the Souris River Prospector 17.5—the 18.5 tracks as straight as you’d like and expect for lakewater, family tripping.

The rounded entry bow and stern shape is comfortable with lots of room for legs, kids dogs or gear.

Any port in a storm

The Souris River Quetico 18.5 is designed to ride drily over waves rather than punch through them and take on water. Or so the theory goes. Just don’t expect a completely dry ride if you’re loaded up with 500-pounds of family plus two-weeks’ of food and equipment. On our last trip’s windiest paddling day, heading into one-foot of chop on a large lake, stability was rock solid but we were still taking on some water over the 20-inch-deep bow.

On that windy day we simply paddled close to shore, hoping the waves wouldn’t get larger. If they had, we wouldn’t have wanted to be on the water anyway. This confirms the Quetico 18.5 is up to just about anything its target users are.

[ Plan your next canoeing adventure with the Paddling Trip Guide ]

For running rivers or paddling on big lakes, nimbler handling, more rocker and deeper, drier sides might be on the wish list, but that would veer the 18.5 away from its intended purpose. It would certainly mean sacrificing some of the boat’s middle-of-the-road appeal.

With the Quetico 18.5, Souris River Canoes offers everything you need for a comfortable family canoe trip: initial stability, tracking, speed—and most importantly, lots of room. 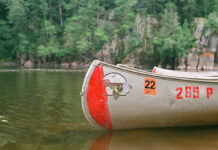