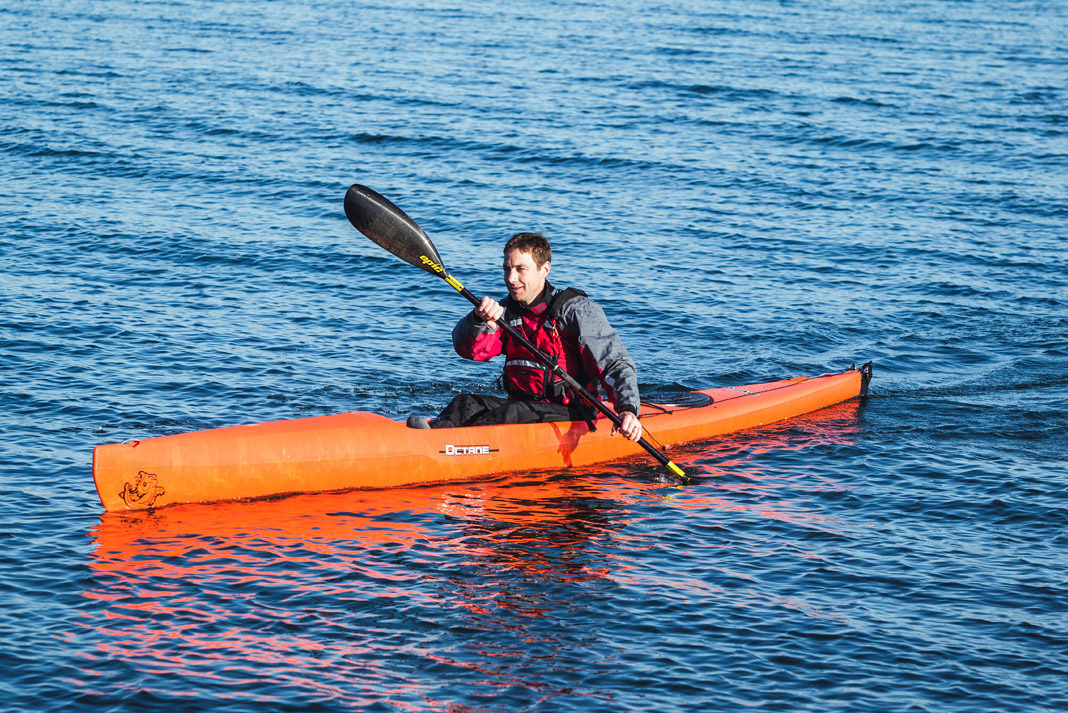 The Popularity Contest Of Surfski

“Surfski is really blowing up,” says Chris Hipgrave, sales director for Pyranha Kayaks, when he explains why the guys at a whitewater kayak manufacturer dreamed up the Octane 175 surfski.

“We’re seeing a lot more races, and a lot more surfskis on the water, but they’re typically expensive. A competitive surfski is $3,000 or more so we wanted to produce one to introduce the sport to the masses,” he adds.

Pyranha collaborated with Canadian surfski specialists Think Kayaks to jointly design an accessible yet high-performing rotomolded polyethylene surfski at an entry-level price. Pyranha, along with sister brands P&H Sea Kayaks and Venture Kayaks, paired its plastics expertise with Think’s knowledge of surfski design and the result was co-released as the Pyranha Octane and the Think Nitro. Yes—same boat, two names.

The Octane gives Pyranha an entry into the burgeoning race and fitness market to balance out P&H’s traditional sea kayak offerings, and the Nitro gives Think a gateway boat to battle its competitors’ plastic skis, like the Epic V7. As a seasoned kayaker and recreational racer who could be described as surfski-curious, I’m the target demographic for the Octane. I’ve briefly paddled some full-on race skis, but I’m more likely to fall for something friendlier, more multi-purpose and less committing, which aptly describes the Octane.

When I test paddled the Octane on the frigid waters of Lake Ontario in early spring, I didn’t want a seat full of ice water any more than an unplanned swim. The Octane didn’t let me down or tip me over. It was reassuringly stable and dry—more stable than many sea kayaks I’ve paddled, despite being more than an inch narrower. The Octane features confidence-building initial stability and even more solid secondary stability, and its high-sided cockpit stays dry even when heeled over to 45 degrees.

I tried really hard to capsize and the Octane kept right on resisting—right until I fell out of the cockpit. There’s no reason the boat might flip without throwing some waves or current into the mix. Any water entering the cockpit can be quickly sucked out by the cockpit bailing system, which opens and closes with a nudge from your hand or heel. I tend to think of surfskis as torpedo-shaped, one-track speedsters, so I was surprised to find my Octane’s hull has semi-hard chines in the mid-section and quite a bit of rocker in the stern. It’s reminiscent of its playful sea kayak cousin, the P&H Delphin.

While the voluminous bow rides over waves and resists pearling, the stern rocker makes the Octane highly maneuverable, able to skid an instant 90-degree turn with a flip of the rudder. Speaking of which, the rudder comes either in a retractable over stern SmartTrack version or with a fixed under stern one. Our loaner featured the over-stern version, which was easily controlled by a lightweight carbon fiber footplate and pedals with enough range to fit paddlers of almost any height. I’m six feet two inches tall and I had four clicks still to go on the pedals.

The sleek Swede form of the hull, with its widest point behind the midpoint of the boat, is accentuated by the cockpit shape, which has a generously proportioned bucket seat. This will fit all but the very largest paddlers. A much narrower leg section allows contact with the boat, and cutaways either side of the deck encourage a high and aggressive catch.

Recreational racers looking for a secret weapon to beat most sea kayaks will be pleased. The Octane is fast, cruising comfortably at nearly nine kilometers per hour, and closer to 11 kilometers per hour in short flatwater sprints. Though it doesn’t have the pop at the catch or the top-end speed of a composite competition surfski, you’d never expect it to. The Octane’s appeal is as a kayak alternative with greater versatility and durability than a pure racer, as long as you don’t mind the 51-pound lift. Although the Octane is made with Pyranha’s Corelite polyethylene foam sandwich construction, getting it on and off the water is its own kind of workout. The recessed handles beside the cockpit are finely crafted but I found too far forward for proper balance, and the bow and stern handles are small to grip. Minor concerns, unless you’re carrying long distances.

The large rear hatch features a waterproof Kajaksport rubber cover, and a front day hatch and rear deck bungies enable daylong expeditions or short overnights. Combined with the durability of plastic, the option of an over stern rudder for shallow water and rough landings, and molded-in bow inserts customized to fit P&H’s sailing system from Australia’s acclaimed Flat Earth Sails, and there’s endless possibilities beyond what a traditional surfski can do. Where can you use a more stable, nimble surfski able to take a beating? Hipgrave uses his to run class II and III whitewater on the Nantahala River. Online you’ll find tales of an Octane sailing to offshore islands in Wales. Just think of the downwind rides you could catch with the speed boost from a sail.

The Octane’s multiple personalities blur the lines between what a surfski and a sea kayak should do. In fact, P&H just announced they’ll be producing an expedition-style sea kayak with an identical hull to the Octane, called the Valkyrie. I say why distinguish between surfskis and kayaks anyway—soon buying one will be like ordering at Starbucks. Would you like a closed-cockpit or a sit-on-top with that?

Some might choose the Octane over a sea kayak simply because they prefer an open cockpit, or vice versa with the Valkyrie. Just as this issue went to press, Pyranha announced the production of the Octane had been temporarily halted.

“The molding process for the Octane is too long, so continuing through peak summer months when we have to optimize efficiency would cause us to let too many customers down for other products,” says Pyranha’s managing director, Graham Mackereth. “Not molding the Octane is the best of the bad options available.” Production will resume in September. Until then, the only concern is how long the existing inventory will last.

If you’re drawn to the Octane’s unique combination of high performance, durability, and versatility get one fast or be left behind until the fall.