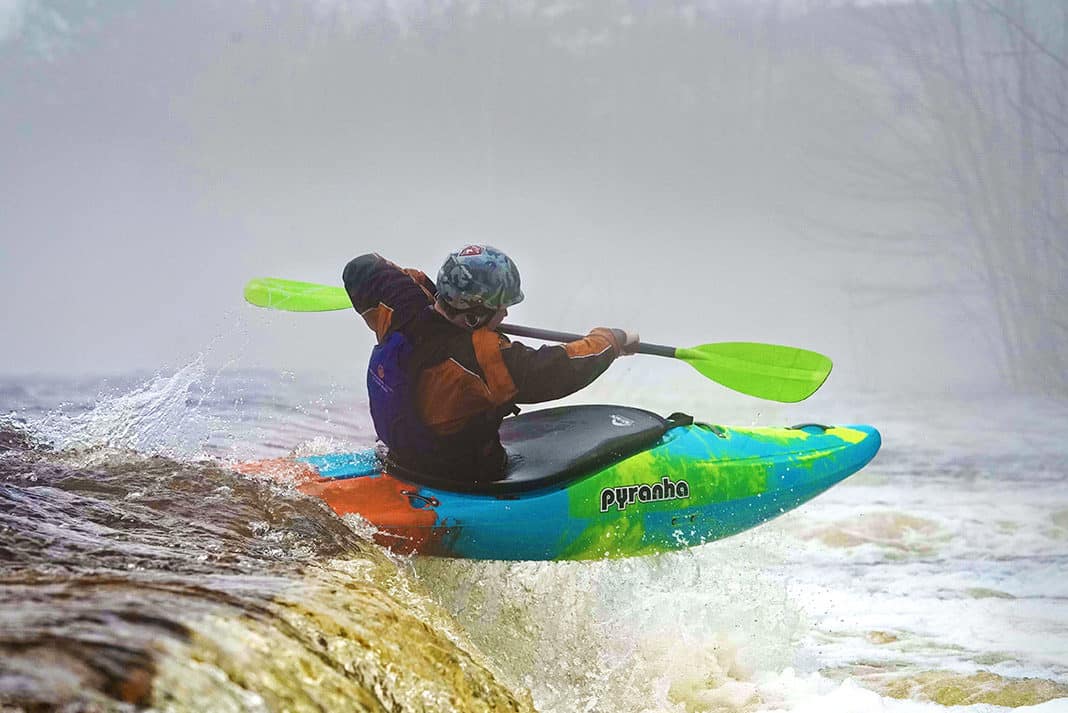 Sometimes combining two things together from seemingly very different starting points can produce something magical. The most obvious example—for Napoleon Dynamite fans anyway—is the liger. “What’s a liger? It’s, like, pretty much my favorite animal.”

Legend has it, if you put a male lion in a room with a female tiger, add some flickering candles and soft music, you’ll eventually end up with the largest living cat on the planet. Maybe you’re thinking, “Of course, two great, big cats make an even better, huge cat.” Things don’t always work out as planned. Ever hear of the mighty tigon? Not really all that mighty.

For several years now, whitewater kayak designers have been experimenting With mating creek boats and throwback playboats. For the most part, I’ve regarded these innovations a bit like pussycat tigons. Cute maybe, but I’ll stick to the originals, thanks.

If I’m being honest, when I first saw the Pyranha Ripper I was expecting more of the same. Big cat yawn. A few quick turns and one rapid later I changed my mind—this boat is purebred liger.

“We were looking for a fast, easy edge-to-edge hull with a playful stern,” says designer Robert Pearson. “We took the 9R rocker, dropped the bow by an inch, keeping the bow volume relatively the same while removing volume from the stern to make it playful. A few width tweaks and rail changes helped us to get the performance we were after.”

All measuring nine feet in length, but with different volume and width distribution. At the time of testing, only the small and medium versions were available, with the largest size set to hit North American dealers at the end of May.

I tested the medium, the first size to start shipping from the U.K. At my winter weight of 180 pounds, I land perfectly in the sweet spot between creeker and play. Pyranha’s posted range for the large begins at 165 pounds and tops out at 275 pounds, whereas the small is 88 pounds to 165 pounds.

With the three sizes on offer, you’ll soon be able to choose the Ripper that suits not just your weight but also your style. If you want to get into something a bit more playful and less creeky, I’d drop down a size. If your local runs are mostly class IV to V with a few good waves and eddylines, I’d probably go larger.

Loaded up with Pyranha’s Stout 2 outfitting, the Ripper’s outfitting is easy—it’s quick to adjust the thigh braces, shim out the hip pads and ratchet myself securely in place with feet firmly on the full-width footplate. In 30 seconds I feel locked in and ready to rip. A far cry from the last time slicey sterns were the cat’s meow.

Picking the Ripper off the ground, I immediately notice another one of my favorite things about it—it’s lighter than I expect from a nine-foot boat. In fact, all three sizes weigh in around the mid-40-pound mark.

While some bigger boats take more muscle to get moving, thanks to the combination of light weight and hull design, I get the Ripper going in a hurry. I’m surprised at the speed I can achieve in only a few short strokes. The Ripper has a narrow bow helping punch through holes and keep paddlers on track. Pearson and his design team managed to keep enough volume up there to ride over waves and give my toes a decent amount of wiggle room too.

Moving back toward the cockpit, I like how easy it is to get nice vertical paddle strokes right alongside the boat thanks again to the narrower-feeling width. At 24.5 inches wide, the Ripper is not actually much narrower than my playboat, but the deck profile and volume distribution makes it feel smaller. The trade-off is my legs are a bit straighter, translating into a less aggressive position than I’ve become accustomed to.

Moving around the river, I’m impressed by how easy the ripper is able to carve in and out of the current and hang out in even the smallest eddies. When I tilt the boat, the edges bite hard and carve in a nice satisfying arc.

And if your paddling skills are a bit rusty and you missed your mark at the top of the eddy, the Ripper attains back up with ease. Barely a few strokes and I’m taking a break in my intended eddy, whereas in most boats I’d either have to work harder or pretend I didn’t want to hit that eddy anyways.

[ Also read: What To Consider When Buying A Kayak ]

So, what about the slicey stern deck? Most of the contemporary kayaks I’ve paddled with a slicey squashed deck are a bit—let’s say—unforgiving in the boily areas of the river. And so, I intentionally spend a lot of testing time in the crazy water below big sets. To my surprise—and relief with water temperatures just above freezing—I don’t flip once. The rocker profile keeps any of the water from piling on to the back deck.

What happens when I intentionally dip those outside edges in?

This is where the Ripper’s vertical playfulness gets unleashed. Stern squirts are controlled and fun. With dialed-in technique, you can change course midcurrent on a dime. Pretty fun and handy in a nine-foot boat. The super flat deck also helps with rolling, as well as some downriver moves like kick flips, where there is an advantage to having your body as low and flat as possible.

The Ripper’s steep bow rocker coupled with great top-end speed and a big planing hull mean the Ripper is equally fun performing boofs and rock moves as it is surfing and downriver play. It was easy to catch smaller features on the fly. Long live soul surfing with the odd spin thrown in for good times. Even if I edged a bit too hard and came off the wave I could usually find my way back up.

Like many, I am sometimes skeptical when things get mashed together because too often we end up with something underwhelming.

Every now and then we get something arguably better, like the mighty liger, and like Pyranha’s new Ripper, pretty much my favorite animal, bred for its skill in magic.