Last fall, hunting for something new for readers led me to the unfamiliar world of sprint racing and the boathouse of Toronto’s Beaches Canoe Club. There I met Simon River Sports president Karen Lukanovich, who put a wing blade in my hand and sent me out in the Polaris, hoping I would stay upright.

SRS is a Canadian company that has made a name for itself in sprint kayaking and branched out to offer a unique line of “performance touring” kayaks—hybrid hulls that split the difference between the “milliseconds count” minimalism of racing and the unrefined burliness of touring. Boats like the Polaris are all-around speedsters for adventure racing, fitness paddling and fast-and-light touring.

“Bring your knees together,” Lukanovich coached as I settled into the unfamiliar sitting position. The Polaris was obviously just a slightly detuned cousin of the racing hulls in the boathouse. It’s wider and more stable—SRS actually rates it an 8 out of 10 for stability. But its cockpit is clearly configured for the aggressive, upright paddling position that is familiar to sprint racers but awkward for us touring paddlers who are used to reclining into a backrest with our knees splayed under the coaming.

When paddling in rough water, I felt vulnerable perched with just my bum and the soles of my feet touching the boat and my knees sticking up above the cockpit. But the relaxed sitting position of a regular touring kayak just doesn’t cut it for paddlers hooked on speed and a full body workout, which is the whole point of a performance touring kayak.

Indeed, after paddling the Polaris a few times, going for a workout in my touring kayak felt like lacing on hiking boots to go jogging. The Polaris is fast because it has virtually no rocker—the waterline is probably a couple of inches longer than that of a touring kayak of the same overall length—and it is super light at just 31 pounds in carbon.

For effortless cruising on flat water, fitness paddling or adventure racing—or anyone who needs a superlight boat but doesn’t want to give up the speed of a long hull—dial up your local paddle racing club or dealer and check out the Simon River Sports line.

The seat is a small, moulded platform—a mere perch for the athlete’s toned glutes. A quick release slides the seat forward/backward in a groove in the marine plywood base. The paddler sits upright with knees together. Lower back and torso are free to rotate for the most efficient and powerful stroke. This aggressive positon takes some getting used to, but once you master the racing style, going back to the old La-Z-Boy slouch just doesn’t feel right. There is just one small hatch on the rear deck for accessing the rudder assembly. Other SRS models come outfitted for touring with a rear storage hatch.

The understern hydrofoil rudder turns this rocket-straight boat in a relatively smooth and effortless arc and makes minor course corrections easy. Turning strokes become all but obsolete as the paddle becomes purely the engine, the rudder the steering wheel. You must place the boat in deep water or launch from a dock to protect the understern rudder. Some SRS models come with a retractable “overstern kick-up” rudder that’s more practical for touring.

The long, narrow cockpit fits paddlers from 4’10” to 6’10”. Only skinny-hipsters need apply. The adjustable footrest provides a solid, sloping platform to push against with both feet. Pumping with your legs on every stroke counteracts the side-to-side rocking of the boat—the rocking motion throws the boat off course and reduces efficiency. Your lower body should get tired too if you’re doing it right. A little aluminum stick between your toes controls the rudder with a slight touch. A sprayskirt is available, but beware that this boat has no sealed bulkheads—a reminder that the Polaris is designed for training on calm waters and near-shore paddling. 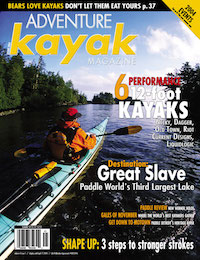