The new WaveSport EZG is supposed to be—as you might guess from its name—a cross between the popular river-play EZ and the freestyler ZG (Zero Gravity). However, you can’t tell how a boat paddles by its name alone.

In fact, the EZG is a tasty mix of the last three WaveSport designs: the EZ, ZG and the Ace or Siren (we’ll pretend the Transformer didn’t happen). 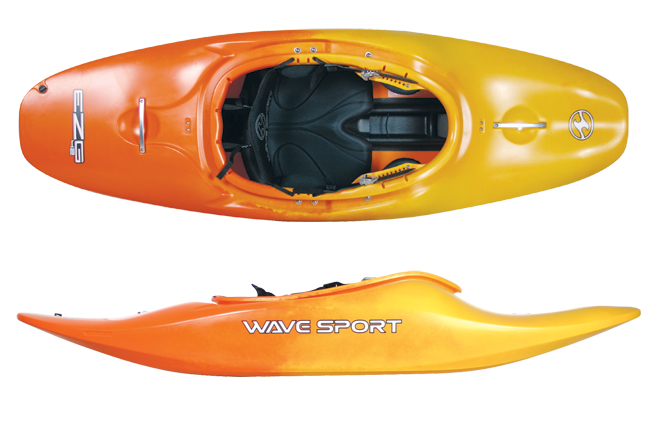 The WaveSport EZG gets the mixture right

The EZG doesn’t knock the EZ off its best-all-around-boat coaster for river runners and beginner paddlers, but let’s use the EZ—a boat almost everyone has paddled—as a baseline. Take the EZ and add two shots of the hottest cartwheeling boats, the Ace and Siren. Their narrow bows and sterns pivot anywhere on the river. They’re great at blunts and backstabs on waves and they blast around in holes. But what the Ace needed was a true flat bottom for spinning and six inches less length. So into the blender they go.

[ Also read: The Greatest River Running Essential No One Talks About ]

The EZG comes out with a shorter length and different hull profile than the EZ. It loses a bit of the latter’s speed and glide and the rock-solid stable platform, but has more slice and edge-to-edge carve. The EZG doesn’t lock into a front or side surf like the EZ; it reacts quicker to paddler input and requires a balanced and active paddling style. Overall, the WaveSport EZG is more performance oriented.

Now we have a sportier EZ with slicey ends. Great, except the EZ doesn’t bounce, and these days all river playboats bounce. So WaveSport incorporated bounce from the ZG hull for big aerial moves. The EZG is also lighter (they’ve replaced the adjustable foot outfitting with a foam block) and the back band is WaveSport’s best yet.

Fits paddlers of all sizes

WaveSport also got the sizing right for the EZGs. The 42 is truly low enough volume for smaller paddlers to toss around, whereas the Siren really wasn’t. The mid-sized 50 fits a 170-pound six-footer comfortably, and beyond that there’s still the 60.

The WaveSport EZG is ready to run

Launch the EZG into a river and you have a refreshing summertime treat—a boat that not only bounces but surfs, cartwheels and plays eddylines like the sweet sound of a steel drum. Think of the blended WaveSport EZG not as a river runner, but as the all-river playboat.