I watched the swell, trying to gauge when I’d have water to ride over the barnacle-covered rock. I got the timing right, but the angle wrong. I cleared the barnacles and careened into the nearby rock wall, scraping the side of my kayak. The collision bounced me back onto the rock—but after the water had left. I hit it sideways, then slid off awkwardly and upside down into deep water. I rolled up, chuckling. Then I did something I wouldn’t have done a year before: tried the same move two more times until I got it right.

That’s because a year earlier, I’d have been paddling a fiberglass boat I might have cracked. At best, I’d have some annoying work replacing the gelcoat. But on this day, I was paddling rotomolded Tupperware.

For years, I’d been a stickler for fiberglass sea kayaks. When I got my first kayak, I saved to buy a fiberglass sea kayak instead of plastic. Lighter, faster, repairable, prettier, modifiable for custom bulkheads, so what’s not to like? Well, two decades later, I’ve got my first plastic sea kayak. And I have a confession: I love it. As Mr. McGuire tells Dustin Hoffman in The Graduate, “There’s a great future in plastics. Think about it. Will you think about it?”

Plastic boats can be heavy, slow and decay in UV if not stored properly. But I believe there is a great future in plastics for kayaking, regardless. If you’ve seen a whitewater boat any more recently than 1972, you’ll know they’ve all been plastic since slalom coach Tom Johnson produced the rotomolded polyethylene Holoform River Chaser five years after The Graduate hit the cinemas. At least he listened to Mr. McGuire. Johnson had figured out fiberglass cracks when you hit a rock hard, and rivers are full of rocks.

Coastlines have rocks too. In a plastic boat, I can play with abandon and not worry about bangs and scrapes. I felt the same freedom I felt the first time I knew I had a reliable roll—I could play hard, and if I capsized it wouldn’t be a big deal. Now I can whack a rock and bounce off like a kid who takes a hard fall but is still made of rubber. With this confidence, I can play harder. The harder I play, the more my skills will grow.

Sure, polyethylene boats have downsides. Molded hatch rims and foam bulkheads tend to leak more than glass boats. They’re slower. Poly boats have a life expectancy and may become squishy and oil can in heat or on storage racks. My plastic boat is super heavy—and my friends already think my fiberglass kayaks are too heavy. But that’s because they’ve been repaired so many times and were built heavy to survive rock contact. I groan when I lift it by myself, and I’m not getting any younger, either.

Sea kayaking has taken on some characteristics of whitewater, and so it’s worth noting why some things work for whitewater. Whitewater paddlers don’t keep their boats for decades, so the lifespan of plastic isn’t an issue. Sea kayaking is in the midst of a bunch of design innovations, so we’re wheeling and dealing our boats more often anyway. We camp less and paddle shorter distances to cool spots more, so speed and extra-dry gear storage are less critical. Ocean play and crossover kayaks have taken sea kayaks into plastic-only terrain. I’ve taken rotomolded sea kayaks on multi-day trips down class II and III rivers.

One endorsement came when I decided to finally patch a few dings in one of my best-loved fiberglass boats. I marked a lot of spots to repair the gelcoat with tape, mixed up the toxic goo, and posted a picture on social media. Before the catalyst had been added, my phone pinged. It was a text from a friend, saying “I haven’t paddled a glass boat in years. Enjoy the fumes.”

But that’s not the most significant endorsement. The biggest endorsement was when I looked over at my friend and asked if he wanted to try that rock move on the Oregon coast. He avoided eye contact and said, “Hmmm. Maybe in a plastic boat.”

So please, Mrs. Robinson, laugh about it, shout about it, when you’ve got to choose.

Neil Schulman has many kayaks in his Portland, Oregon garage. Fifty percent are plastic. The other half could use some repair. 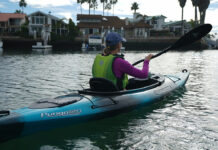