Kayak fishing sure has changed. Back in the Plastic Navy glory days of the 1990s, the ranks were full of penny-pinching saltwater MacGyvers, who would scarcely recognize the blinged bass battlewagons filling the dreams of today’s inland kayak anglers. These new custom fishing sleds are packed with cutting-edge technology, gee-whiz Spot-Lock electric trolling motors, omni-view photo realistic fish finders, remotely controlled stakeout poles, and more. But have we lost touch with the grassroots spirit that got early kayak fishing off the ground? 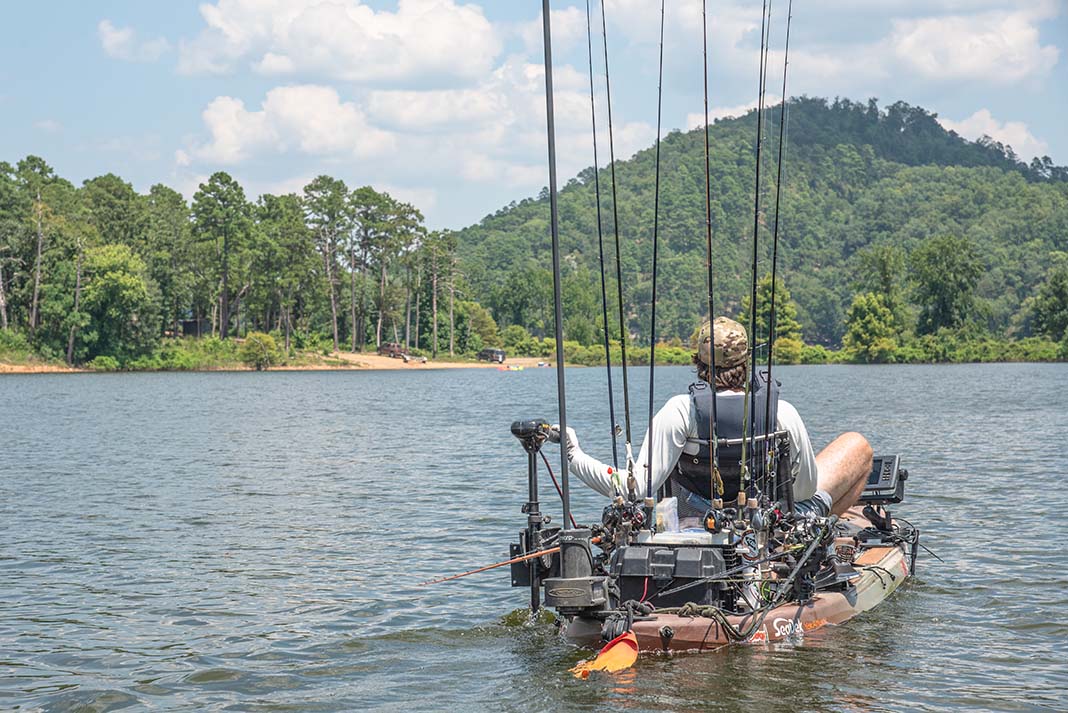 Searching for the soul of kayak fishing

Before we go too far, a few words of explanation. Recreational kayaks still dominate kayak sales, and relatively inexpensive kayaks remain the entry point for most anglers. What we’re considering here is mindshare. These top-shelf rides fire the imagination of fish-obsessed kayakers, and will help determine how paddlesports manufacturers and retailers invest their development and marketing budgets for years to come.

In that light, this truly is a battle for the soul of the sport of kayak fishing. Spoiler alert: The no-expense-spared kayaks born of the freshwater bass tournament scene seem to be winning. This evolution is already clear in the market where girthy pedal drive kayaks dominate and the stretched-out paddle ‘yaks of yore are lost at sea. Finding an offshore-worthy craft has become a needle in a haystack proposition, which is why my latest ride came to me after gathering dust in a warehouse for years.

Kayak fishing through the years

Perhaps no shop illustrates the changing complexion of kayak fishing better than Kayak Fishing Supplies. Founded in San Diego at the cusp of Southern California’s kayak fishing boom, Kayak Fishing Supplies later expanded to Sunset Beach. Principal Owner Brent Torgeson began selling kayaks around 1998, after an encounter with one of those salty pioneers opened his eyes to the potential of the humble craft.

“Here comes this guy who went by the handle Madscientist with a 50-pound sea bass,” he recalls. “And I can’t catch one from my nice powerboat.”

The early kayak fishing MacGyvers brought inspiration and innovation, but an industry was growing from the fertile ground they tilled.

Torgeson, his shop, and the once-vibrant online community Big Waters Edge were soon at the forefront of kayak fishing innovation. He and his pro staff, one of the first in the sport, worked closely with manufacturers to develop fishing-forward ‘yak designs. They were chiefly intended for saltwater, where the growth was at the time. These boats were 14 or even 16 feet long, relatively narrow and feature-free by today’s standards.

Every hull was a blank canvas. Anglers wasted no time expressing themselves. The forums became hothouses of ideas. Kayak fishermen transformed zip ties and milk crates into effective fishing tools and shared their successes online.

Naturally, the self-directed tinkering evolved into professional installations, with shops like Torgeson’s leading the way. The MacGyvers brought inspiration and innovation, but an industry was growing from the fertile ground they tilled.

Custom kayak rigging, Torgeson says, is something a retailer must care about to do well. It isn’t for everyone, but especially in these post-Pandemic days when the calculus of shipping kayaks has changed business plans, it can pay off. There’s no telling where industry trends will take kayak fishing in the future, but we know where we are now: North of $15,000 for the ultimate bleeding-edge bass rigs.

Kayak fishing has caught fire inland. In parallel with nationwide recreational fishing demographics, freshwater anglers vastly outnumber those who fish the salt. The paddlesports industry worked hard and long to develop this vast and once-untapped market, and there’s still room to grow.

In a trend mirroring the horsepower-fueled professional bass fishing circuits designed to jolt the sales of high-dollar bass boats, freshwater kayak bass fishing tournaments offering increasingly high-dollar cash prizes have proliferated. Take the 2023 Kayak Bass Fishing (KBF) Pro Series, which dangles a $50,000 first place prize. That’s a lot of incentive, and its influence on fishing kayak development and rigging should not be underestimated.

How To Flip A Kayak Back Over With Jeff Little

“No one can afford a bass boat anymore,” he says of the slick powerboats that, for many, are now just the stuff of dreams.

When Little was fishing as a backseater in local tournaments in the 90s, the guys who owned those boats typically worked in the trades or other blue-collar jobs. Today, a top-notch Bass Cat or Triton can go for more than six figures. For many, they are simply out of reach. Ergo, a new kayak fishing customer base.

“Those same guys can afford a $5,000 Hobie Pro Angler and have enough money left over to put whatever depth finder they want on there, and Power-Pole and Torqeedo. They want to go faster than everyone else. These are one-man bass boats,” Little adds. “That’s what’s fueling the top-end price tags—a vacuum of affordability between a kayak and a bass boat.”

Say what? Back to Brent Torgeson of Kayak Fishing Supplies, whose expert riggers are increasingly building flashy $15,000 beasts for serious bass fishing enthusiasts.

One such build, as documented on the Kayak Fishing Supplies YouTube page, featured a top-end MotorGuide Xi3 Kayak model trolling motor with Pinpoint GPS and remote control steering system, the latest sidescan and downscan fish finders, Garmin Panoptix LiveScope imaging, and high-test all-day lightweight batteries. Add a trailer, a lighting system, and a few other gadgets and it’s not too hard to hit the $15K threshold. 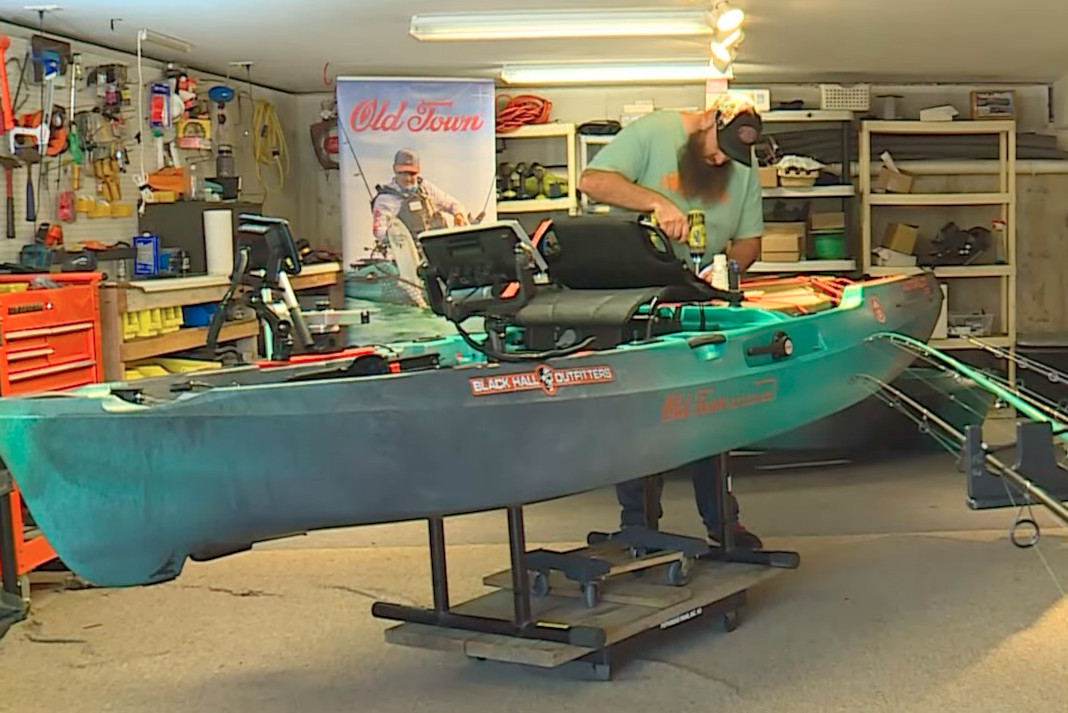 Mod My Ride: Kayak Shop Shows How They Build Out Custom Boats

“Guys using this equipment in the tournaments say they have better results, especially on slow fishing days,” Torgeson says. “They can stay on spots even when it’s windy. Winning a series or tournament means a lot to them, and not just for the financial rewards. Bragging rights are pretty important to a lot of them.”

And the bling. Let’s not discount the cool factor of owning the hottest new ride on the lake.

Mindshare doesn’t translate directly to market share, but there is a correlation. While some anglers will jump straight to the five-figure investment, the point of entry remains an $800 paddle kayak for many.

Before we go selling your soul, there’s still a place in the sport for scrappy innovators. Just ask 2021 KBF champion Guillermo Gonzalez, who estimates his Diablo Amigo, bolt-on Newport Vessels NV Series trolling motor, Power-Pole Micro and Garmin ECHOMAP Ultra only set him back about $4,000, all-in. Talent can win out, at least for a while. 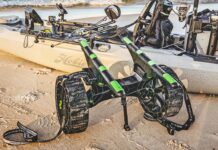 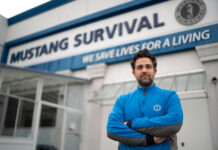