Local hangings were the most popular legal (and extra-legal) form of execution in North America long after its supposed civilization. They were public events with a festive atmosphere—families attended with picnic baskets and vendors sold souvenirs as crowds gathered to watch the spectacle.

In 1949, about the time that lynching was finally coming to its end as an American pop-culture thing-to-do, the first official World Championship canoe and kayak slalom races were held in Switzerland. Swinging from riverside trees were gates instead of nooses. Whitewater slalom was becoming its own form of punishment for crimes such as sloppy technique, lack of boat control and low-water boredom.

Local hangings are still happening, but are now hidden deep in urban river valleys and in smaller forgotten channels of popular rivers. Some courses are the training grounds of the nation’s best slalom athletes, while others transform a class II swift into something to do on hot summer evenings.

Hanging gates requires only a little wood- working and some trial (not that kind of trial) and error.

Each gate consists of a horizontal wooden crossbar and two five- or six-foot vertical poles. The crossbar should have eyelets installed at either end, top and bottom—an upper set for hanging the bar from the supporting wire and a lower set to suspend the poles.

The book of slalom law states that gates can be as narrow as 47 inches, but a width of 52 to 54 inches is more comfortable, especially for open canoes. For proper presentation you could add gate numbers and sponsors to the crossbars and paint the poles white with green or red bands—red for “upstream gates” and green for “down- stream gates”.

Pre-planning is the key to any successful execution. Whether you’re hanging just a few practice gates or setting a full race course, every gate should lead naturally to the next, using the flow of the river instead of the paddler’s strength. A course should be balanced with a nearly equal number of gates for left- or right-handed paddlers.

Place some gates deeper in eddies so that boats can carve through them. Put others tight on eddylines. Vary the speed of the course so that strong paddlers can muscle through in some places while the careful technicians can whittle their way through oth- ers. Even if you’re hanging gates on a class II river, there always seems to be a tendency to make the course too difficult. Initially, hang your course so that mere mortals can navigate it cleanly; then create a move or two that challenges the desperadoes.

Hanging gates across even a narrow, lazy current can be a fiasco. Your first challenge is establishing a pull line—the line used to move the rest of the lines from one bank to the other. Try tossing a throw bag or even paddling a line across. Popular with Neanderthals is the rock-and-length-of-twine heave toward a cowering partner. Once you have your pull line set, hanging gates can be a simple process of pulling different lines back and forth across the river.

Keeping in mind what finished gates look like helps you understand the process of hanging them. For each gate imagine four lines strung across part or all of the river and anchored to either nearby trees or homemade bipod supports. One line hangs the crossbar, one pulls the crossbar into position and the other two control the height of the poles.

The teams on either side need their own spools of line, knives, whistles and the know-how to tie a knot or two. To go into greater detail would take pages to explain things that will be obvious after hanging the first gate.

Before long your local gate hanging spot may be a public spectacle, complete with picnic baskets and vendors gathered to watch the mob of vigilant paddlers in pursuit of whatever whitewater witchcraft it takes to paddle through them fast and clean.

Brian Shields and Scott MacGregor are responsible for at least one local hanging in a small Ottawa Valley lumber town. They recently placed 10th at the 2005 North American Open Canoe Slalom Championships in Jonquière, Quebec. 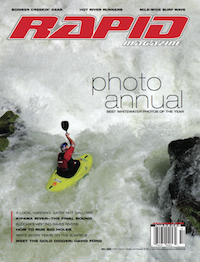 This article first appeared in the Fall 2005 issue of Rapid Magazine. For more great content, subscribe to Rapid’s print and digital editions here.