When we consider towing, we tend to think about rope. We carry a tow belt with a sturdy carabiner as well as a short, deck-mounted tow rope with a quick-release, and we use them to help paddlers who are exhausted, overwhelmed, injured, or drifting into a danger zone.

We wouldn’t paddle without these essential pieces of safety equipment. But sometimes, we can best help a timid or tired paddler with the most powerful piece of equipment in anyone’s kit: the mind.

Robert Schrack, co-owner and chief instructor at Adventure Crafters Paddle Centre in Maryland, coined the term “psychological tow” to explain this technique. If you’re an instructor or guide, or a skilled paddler who has taken less experienced people out on the water, you may already have used this tow without realizing it. But recognizing what it is and when it’s appropriate can enable you to bring it out more quickly and use it more effectively.

Frequently, inexperienced paddlers reach their limits before others in a group. They may be freaked out by waves or wind, or simply tired out by too much exertion or the conditions they find themselves in, and they need some help to complete the planned journey. You can usually see evidence in their posture, strokes and demeanor. They may lag behind the group, wobble, use tentative strokes or be unusually quiet.

We’re often taught that this is the time to tow them. Sometimes it is. But doing so has a downside: It can embarrass or discourage the struggling paddler when he may be capable of rising to the challenge. And in the case of rough water, it might make things worse.

Instead, you can use the psychological tow: “Keep going. Keep your hips loose. That’s great. Keep paddling. Nice work. It’ll be easier if you get your entire blade in the water.”

Youcaninstructthemabit,encouragethem a lot, and help them focus ahead on where you’re going instead of on where they are.“You see that tower? We’re going to land just to the right of it.” You can also point out interesting features of the place you’re paddling. “That lighthouse over there has the largest Fresnel lens on the Great Lakes.” By paddling close to them and sounding relaxed, offering a mix of small talk and advice, you can enable them to make it on their own.

That’s the psychological tow. Having a term for it is not only satisfying, in the same way as knowing the names of birds or mushrooms. It’s practical.

By placing the psychological tow in the category of tows, it reminds us to try this first before a more invasive intervention. And it gives the struggling paddler a well-earned sense of accomplishment. 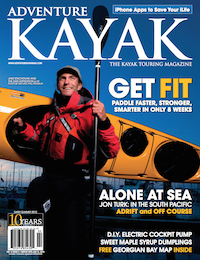