Unlike the hollow bones of most birds, much of a loon skeleton is solid. The added weight aids in diving but makes it difficult to get airborne. Loons must swim into the wind or run across the water to create enough lift for take-off.

The average airspeed velocity of a migrating loon is 120 kilometres per hour (much faster than an unladen swallow—African or European).

Loons can stay underwater for almost a minute and dive to depths of 80 metres.

Loons have four distinct calls: A laughing tremolo signals alarm or greeting; a haunting wail is used during night chorusing with a mate and social interactions. A one-note hoot aids in locating or checking on family members; and every male has a unique yodeling call that it uses to defend its territory.

The loon has internal air sacs that help it float. When threatened, it can empty these sacs to sink its body like a submarine, leaving only the head visible as a periscope.

The loonie is rooted in classic Canadian scandal. In 1987, a voyageur canoe like that depicted on the old silver dollar was chosen to grace the new Canadian one-dollar coin. Somehow, the master dies were “lost” during transit from Ottawa to the Royal Canadian Mint in Winnipeg. To avoid possible counterfeiting, the familiar loon design was substituted at the last minute.

Although the loon’s maniacal laugh gave us the phrase “crazy as a loon,” the term “loony” has entirely separate origins. Since Roman times, a widely believed theory held that exposure to moonlight—especially that of a full moon—caused madness. Those unhinged by the moon’s influence were known as “lunatics” from luna, the Latin word for moon. Loony is simply a slang version. 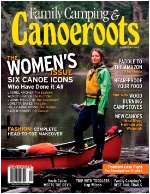 This article first appeared in the Summer/Fall 2009 issue of Canoeroots Magazine.