In the 1990 comedy, Crazy People, Dudley Moore is Emory Leeson, a bitter advertising executive who gets checked in to a psychiatric hospital because he pitched a “truthful” advertising campaign at his prestigious New York agency.

As movie plotlines go, consumers line up to purchase Volvos and the new campaign is wildly successful.

Emory is hired to create more honesty in advertising slogans, and soon branches out beyond automotive and helps develop travel slogans such as, “Come to New York, there were fewer murders last year.” Or, “Forget France, the French can be annoying, come to Greece. We’re nicer.”

In all 137 featured trips in this year’s Paddling Trip Guide, not one of the 43 outfitters has taken to heart Emory’s brutally honest approach to advertising. And I’m not sure I would either. Or would I?

According to George Loewenstein at Carnegie Mellon University, all of us walk around with an image of the good life. We may have radically different images of what the good life is, he says, but when we go on vacation, we are trying to create a life resembling what we think of as the good life.

Except on canoe, kayak, paddleboard and raft trips we know it’s not all going to be unicorns and rainbows.

On the Broken Skull River in the Northwest Territories, it rained on us nine of the 11 days. On my last rafting trip, the biggest rapid was an all-day portage. Bike packing and packrafting the Riviere Noire we paddled out in the dark, four hours after we told our families we’d be home. Float planes are delayed. Fish don’t bite. Legs are broken. Tents leak. And I can’t be the only one to confuse tablespoon with teaspoon when mixing baking soda into the bannock.

“The worst experiences often make the best memories,” Loewenstein said. And when it’s over, we regale friends and family with our tales of misadventures.

“People return to the miseries of the mountains over and over,” Loewenstein said, “in part, because they can’t remember the misery of being cold, hungry, exhausted, and terrified. Mountaineers are acutely aware of this, but it doesn’t help.”

Loewenstein considers this the biggest paradox about vacation travel—why we keep going back despite our disappointments. Disappointments only in that reality does not match our version of the good life vacation.

Paddlers are the same.

Loewenstein believes no matter how much we remember misery on previous trips, we cannot remember what those miseries actually felt like.

[ Also read: The Most Difficult Canoe Trip In Algonquin Park ]

Terence Mitchell of the University of Washington coined the phrase, the “rosy view.” We often view vacations as enjoyable experiences, despite the many obstacles and frustrations they sometimes present at the time. Our view of paddling trips gets rosier the longer we’ve been home.

If the bad blends with the good and we’re unable to remember the feeling of swarming mosquitos and achy shoulders, why are outfitters not selling the truths about paddling trips? What if we made reality the good life?

Let’s give Emory a crack at writing our slogans. Embrace honesty in advertising and sell it like it is. “The bugs are horrendous, but you’ll have them all to yourself.” “You’ll flip in the rocky rapids, but our guides are charming and mostly single.” Or, “Paddle with whales. It’s simply terrifying.”

[ Also watch: Video of man paddleboarding next to the world’s largest whale ]

Chances are you’re reading this at the breakfast table. Swarming insects and bumpy whitewater are less threatening from within the air-conditioned comforts of your kitchen. You are wearing your rosy view glasses.

Too often on the trip, usually in the rain, daily life will take on an idealized rosy glow. “We forget the fights with our spouse, the trials with our children, the endless chores, and our bed at home suddenly seems infinitely comfortable and comforting,” he said. “Within hours of returning, of course, there is the inevitable, ‘why was I so anxious to get back home?’”

When I was guiding full time and the conditions were nasty, we’d tell our guests, “A bad day on the river is better than a good day in the office.”

Some of them got it. Mostly the crazy people.

Scott MacGregor is the founder and publisher of
Paddling Magazine.

The truth is out there. | Photo: David Jackson 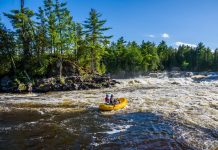 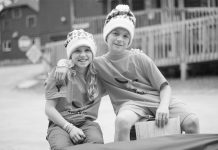 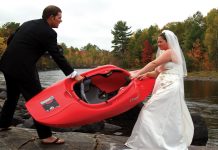 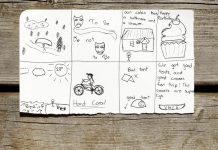 Why Paddling Is More Important Than Grammar