Emre Bosut stands in the middle of a circle of three dozen paddleboarders limbering up in wetsuits and drysuits on MacKenzie Beach in Tofino, British Columbia, the end of the highway on the west coast of Vancouver Island and the surf capital of Canada.

Bosut spreads a laminated chart of local waters and landforms on the sand and, with a finger, maps out a route around Felice and Stubbs islands.

You don’t want to fight the ocean, you’re not going to win that battle

Then he asks us to identify topographic features and weather conditions—such as seafloor depth, swell, winds and tides—that could present challenges during today’s SUP tour. You don’t want to fight the ocean,” says Bosut. “You’re not going to win that battle. Let’s work with the water. That’s always a lot more fun.

Bosut, five-foot-seven with a mop of curly black hair and a confident teacher’s voice honed by nearly two decades of guiding, runs Tofino’s T’ashii Paddle School, which specializes in paddleboard surfing and touring. The outing he’s helming on this sunny late September afternoon is part of the SUP Symposium, one of the biggest annual paddleboarding meetups in the country, co-hosted by T’ashii and Victoria-based South Island SUP.

When the event was launched in 2015, modeled after similar kayaker weekends, it was envisioned as an opportunity for skills development and networking among instructors, outfitters and others in the SUP industry. Over the last four years, the symposium has evolved into more of a community gathering, attracting everybody from gear reps to people who just love to paddle. Attendance crested at about 40 in 2018, mostly from British Columbia, but also Ontario, Quebec and the United States. And Bosut, a transplant from Toronto, who was drawn to the Pacific Ocean by his obsession with surfing, has found himself riding the wave of a growing sport.

Born in Germany to Turkish parents, Bosut, now in his mid-30s, emigrated to Canada with his family at age two. He was introduced to kayaking by a high school teacher, who took students on whitewater trips.

This propelled Bosut and his friends into catching waves with their boats on Lake Ontario, which segued into canoe tripping throughout Ontario as a camp counselor, river surfing on the St. Lawrence while studying business at McGill University, summer jobs raft guiding on the Ottawa River and in British Columbia, and a two-month stint in Tofino—the hook on which he would be reeled in.

Montreal’s Habitat 67 standing wave gave Bosut the surfing bug. He’d go at dawn, before class, and in the mid-2000s, the infancy of river surfing in the city, he was often the only person on the water. Driving to campus in bumper-to-bumper rush hour traffic, still in his wetsuit, adrenalin still pumping, it was like he was living in a parallel universe, a sensation vanquishing any interest in pursuing an office career.

After university, when the appeal of entry-level hospitality jobs wore thin and the transience of work-to-surf gigs in France and Central America began to feel like skimming the surface of cultures he would never become part of, Bosut settled in Tofino in 2011. Right when paddleboarding was starting to spread across the nation.

Initially, he worked as a sea kayak guide, but year-round jobs on the water were hard to secure. Starting a business was one way to carve out a career and plant roots, says Bosut, noting the growth of Tofino Paddle Surf, which is run by lifelong local Catherine Bruhwiler, a national surf champion and paddling instructor who, with her brothers Raph and Sepp, helped put Tofino on the international surfing map.

Bosut opened T’ashii in 2013, which allowed him to purchase five paddleboards at wholesale prices. He had paddleboarded a grand total of once at the time, on the calm tidal flatwater of Tofino Inlet, where T’ashii currently has a rental shack.

[ View all paddleboards in the Paddling Buyer’s Guide ]

“I’ve made many of my major life decisions around catching wave energy,” he says, “but I also love paddling, and SUP allows me to combine these two passions.”

In a town where every other vehicle has a board on the roof, there has been some friction between prone and paddle surfers over lineup etiquette.

At South Chesterman Beach, a great beginner’s break, somebody affixed “no paddleboarding” stickers to a sign near the parking lot.It’s intermediate surfers, frustrated with their performance on the water, who bark at paddleboarders, Bosut speculates. Although, SUP surfers who naïvely snake waves are also to blame.

Regardless, in a place like Tofino, which has so many consistent breaks, Bosut sees mutual respect as the key to harmony.

[ Also Read: The Ultimate Guide To Buying A Standup Paddleboard ]

That’s certainly the vibe at the SUP Symposium, which is open to anybody with advanced flatwater skills. Guides can maintain credentials and small business owners share ideas. Amateur paddlers can learn to surf or tour in dynamic ocean conditions. And people connect on the water and around the campfire, drawn together by their shared attraction to SUP and Tofino, and stoked to spread the gospel of both.

Why did I ultimately choose SUP over so many other things?” asks Bosut. “I suppose because it gives you versatility on the water. You can move around on the board. You can jump off and go for a swim. You can catch waves, or go camping.

There are lots of nuances, and you make split-second decisions when SUP surfing. But as you gain more experience and more control, time slows down. You relax and adapt to the situation you’re in. You’re not going to power through and win. That’s a pretty good metaphor for paddleboarding, and for my life as well. 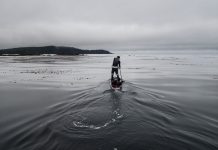 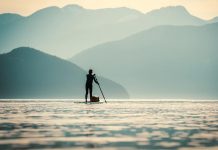 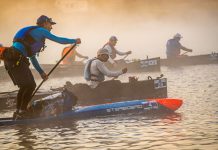 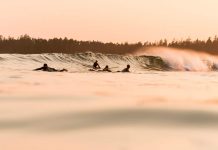 The Paddleboarder’s Guide To Falling In Love With Surfing 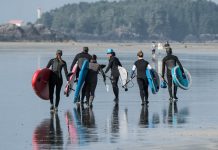