They will ask, “Whatcha doing this weekend?”

You will answer, “Paddling.”

Inevitably, they will reply, “Oh, I’ve always wanted to go rafting.” It will pain you even though you knew it was coming, even though you’ve heard it a hundred times. There is no polite reply.

Our sport may be growing, but people—family and best friends included—still have no clue what we do. They can’t grasp the difference between a 20-foot blob of black rubber filled with pasty, poorly-dressed punters and a responsive piece of plastic paddled by a party of one. Rafting involves a paddle, a helmet and a lifejacket and is therefore whitewater in their eyes. They don’t see the cunning with which kayakers pick our way down the river. They can’t imagine the freedom of slicing through a roadless landscape or planing down the face of a glassy wave. They’ve never felt their gut lurch at the lip of a drop, the sensation of being airborne and the impact upon landing. They think rafting looks fun.

“I’ve always wanted to do kayaking, but I am so afraid of flipping over and being trapped under the water,” they will continue if you bother impressing upon them the subtle differences between the sports. (You don’t bother explaining that you don’t “do” kayaking.)

Then, just to confirm you might as well be talking to a stump, they will blather on about how they heard from a friend’s uncle’s cousin that his neighbour got trapped and almost drowned…but didn’t.

“I would be scared of dying by going over a big waterfall,” they point out.

Of course they’d be scared of dying this way. Most of us would be, but a little perspective please.

Most of us would also be scared about skiing off huge cliffs we see in ski movies. So why isn’t there the same fear of skiing? Oh right, because you don’t hurtle off cliffs when you go skiing, you ski the blue runs.

The same complex understanding of kayaking is absent.

For some reason the innocent mob thinks if you’re in a kayak you’ve got to run Niagara Falls. I blame Tao Berman.

“Aren’t you scared of drowning?” they ask.

“Yes I am,” I reply. This stumps them and stalls the flow of stupid comments, but only for a moment.

“I went kayaking once out West. It was so amazing,” they gush. “We saw whales and starfish…”

Due to the accessibility of lazy-man canoes, sea kayaking has quickly dwarfed our much cooler, bolder sport. Lame sports like rafting and sea kayaking take the same tools we use but apply them to something altogether different. Sea kayaking is not a sport, it’s speed walking on water.

Will people ever understand what we do? Will they understand the passion of putting on frozen gear at 8 a.m. to go paddle recently thawed ice? Will they comprehend that being free is losing yourself on a river? That the river is an equalizer where people from all walks of life are connected by a shared love?

No. As usual the masses will draw conclusions without knowing the full story. They’ll make things up about what scares them and what they don’t understand. They’ll decide paddling whitewater is way too extreme and keep the sport at an arm’s length.

When you’re strapping your kayak to your racks and they say, “Have fun rowing!” just smile and be glad they don’t ask to come along.

Ben Aylsworth considers himself an ambassador of the sport. 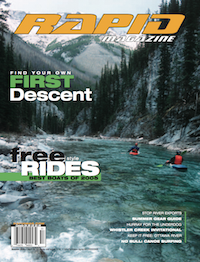 This article first appeared in the Summer 2005 issue of Rapid Magazine. For more great content, subscribe to Rapid’s print and digital editions here.