“Trump: Good or bad for paddlesports?”

We posed that question to industry leaders for last year’s Sound Off section of Paddling Business. It was a tongue-in-cheek query, designed to invite humorous responses to the surprise election of the brash new American president. Now the question doesn’t seem funny at all.

At the end of May, the Trump administration announced new U.S. tariffs on imported steel and aluminum, bringing the U.S. and its closest trading partners to the brink of trade war. Canada and the European Union immediately announced retaliatory tariffs, including stiff levies on kayaks and canoes. The European surtax is 25 percent on U.S.-made kayaks and canoes; Canada’s is 10 percent on U.S.-origin kayaks, canoes and inflatable boats.

To complicate matters, Chinese-made paddlecraft and inflatables will likely be subject to a 10 percent U.S. tariff set to take effect in September.

The full impact on paddlesports is yet to be seen, though sources throughout the industry agree the effects will be deeply felt, and the damage won’t be limited to American manufacturers and their employees. European and Canadian retailers are likely to take a beating, and U.S. retailers could feel the pinch if excess inventory puts downward pressure on prices.

While the 10 percent Canadian tariff imposes what business-school types call “headwinds,” the 25 percent European levy looks more like an incoming Category 5 hurricane. If the storm lasts into the 2019 season or beyond, it could blow some U.S. companies right out of the European market.

“A 25 percent tariff is hard to hide from the consumer,” says David Hadden, Watercraft Brand Director at Johnson Outdoors. “Fishing boats will probably have better success than touring boats because the U.S.-made products still exceed the quality and features of European kayaks, but for canoes and touring boats, this will create challenges and could price U.S.-manufactured products out of the market,” he says. “It will impact sales volume no matter how strong the brand or product.”

The outlook in Canada isn’t much better. The low Canadian dollar, which at press time was trading at 75 U.S. cents, has already driven prices up and margins down for U.S. manufacturers. The addition of a 10 percent tariff will exacerbate an already difficult situation.

“Following the imposition of the tariff, it could be some time before we ship to Canada,” says Wenonah Canoe Vice President Bill Kueper. Kueper, like executives at other major manufacturers we spoke to in late June and July, was still trying to assess how the tariffs would affect his business. That uncertainty is almost as confounding as the tariffs themselves. The majority of 2018 boat orders had already shipped when the Canadian and EU tariffs were announced at the end of May, and some manufacturers scrambled to fill orders before the tariffs went into effect June 22 for Europe and July 1 for Canada.

“We dedicated our factories to Canadian orders recently to finish and get what is possible across the 49 th ,” says Kueper. The full effect of the tariffs won’t be felt until next year, and a key indicator of that impact—pre-orders for 2019 delivery—will come into focus later this summer and fall. When Canadian and American retailers meet with manufacturers at Paddlesport Retailer in late August and Paddle Expo in early October, they will want to know how much of the added cost manufacturers will absorb. Sources on both sides of that equation agree producers will be hard-pressed to offset more than a fraction of the 10 percent Canadian hike. Compensating for the 25 percent European increase is out of the question. The margins just aren’t there. “Ultimately the cost will get passed on to consumers,” says NRS chief executive Bryan Dingel. 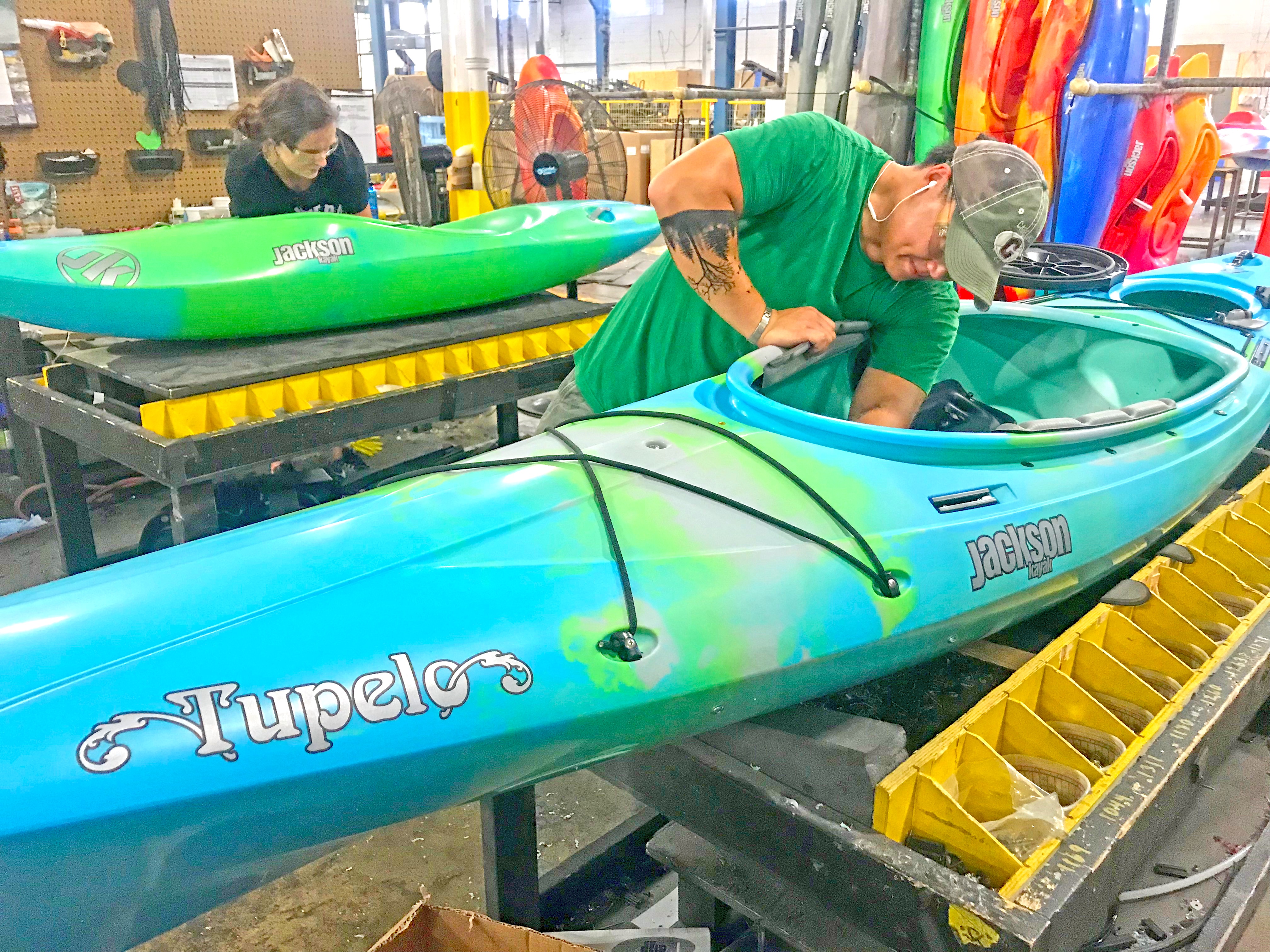 Retailers are hedging their bets. No one wants to drop U.S. suppliers they’ve worked with, sometimes for decades, but they’re assessing their options just the same. One mid-sized Canadian retailer who stocks primarily Confluence boats booked his ticket to Paddlesports Retailer after learning of the tariffs. “I wasn’t planning to go,” he says, “but now I feel like I need to see what else is out there.” In addition to assessing their alternatives, retailers are likely to reduce their exposure. “I think retailers will keep display models on the floor but many won’t actually stock those boats,” says Johno Foster of Watershed Sales, an Ontario-based buyer for Native Watercraft and other U.S. brands. “They’ll be special-order for customers willing to pay the extra cost,” he says. The idea is to hunker down until the tariffs are lifted, though it’s anyone’s guess how long that will be. “How long is the current administration going to be in office?” NRS chief executive Bryan Dingel asks rhetorically. “Because that’s where this thing comes from. This administration came into office without a plan and now they’re playing checkers while the rest of the world is playing chess.”

Dingel’s frustration is understandable. His company will feel the pinch from both sides—Trump’s aluminum tariff will add 10 percent to the cost of forged aluminum raft frame components from Taiwan, and the completed frames (with U.S.-sourced tubes) will be subject to Canadian and EU tariffs on finished aluminum goods.

European and Canadian leaders have made clear that their tariffs are a direct response to the U.S. steel and aluminum tariffs, and will be withdrawn when the Trump administration removes those trade restrictions. That could still happen quickly; President Trump, after all, has been known to reverse policy quickly, and some observers believe the tariffs are a negotiating ploy. On the other hand, as Paddling Business went to press, the presidential rhetoric suggested just the opposite, with Trump threatening stiff new tariffs on European automobiles and components.

Meanwhile, hostilities are escalating on the trade war’s Pacific front, with the Trump administration releasing on July 6 an expanded list of proposed tariffs on Chinese goods, including 10 percent levies on Chinese canoes and inflatables.

European and Canadian leaders say their tariffs are proportional and crafted to put economic pressure on U.S. regions that supported Trump in the 2016 election, especially those that might flip to the Democrats in the 2018 midterms and 2020 presidential race. While some paddlesports manufacturers fit that profile—Hobie molds kayaks in California’s hotly contested 49 th Congressional District, for example—the simpler explanation is that canoe and kayak companies are innocent victims of the trade-war crossfire. Canoes and kayaks share an import code with other recreational watercraft, including motorboats—a much larger industry that uses a great deal of aluminum and steel.

“I think we’re just collateral damage,” Foster says. In fact, the May 31 tariff announcement from Finance Canada did not even mention canoes or kayaks by name. In the days after the provisional lists of Canadian and EU tariffs were released, paddlesports manufacturers, retailers and shipping agents scrambled to learn more about the import duties, which took effect July 1. Near the bottom of the three-page Canadian list of products targeted for reprisal, between washing machines and mattresses, was Canadian tariff code 8903.99.90, described as “other vessels for pleasure, outboard motorboats.” Looking deeper, paddlesports manufacturers and importers came to the heart-sinking realization that the code encompasses a range of recreational watercraft, including kayaks and canoes. “I checked my import documents and that’s the code they come in on,” Foster says.

A spokesperson for the Canada Border Services Agency confirmed to Paddling Business that the tariff applies to kayaks and canoes. Canada will also levy a 10 percent tariff on inflatable boats, import code 8903.10, which includes whitewater rafts as well as inflatable kayaks and canoes.

A source with the European Commission confirmed that EU import code 89039910, which is included on the list of EU tariffs that went into effect June 22, applies to U.S.-made kayaks and canoes imported to the European Union. They are now subject to a 25 percent tariff. The list of U.S. tariffs on Chinese goods includes U.S. import codes includes import codes 8903.10.00, defined as “vessels, inflatable, for pleasure or sports,” and 8903.99.05, “vessels, canoes, not of a type designed to be principally used with motor or sails.” While the word kayak is not included anywhere in the 205-page document, previous rulings by the Office of the U.S. Trade Representative (USTR) have classified kayaks under the code applying to canoes, 8903.99.05, which is on the list. At press time, the USTR had not responded to a request for clarification. (Under the Harmonized System Convention, the first six digits of tariff codes are “harmonized” internationally, and each country has its own code after the six common digits. Hence the Canadian, European and U.S. tariff codes relating to kayaks and canoes are slightly different.) 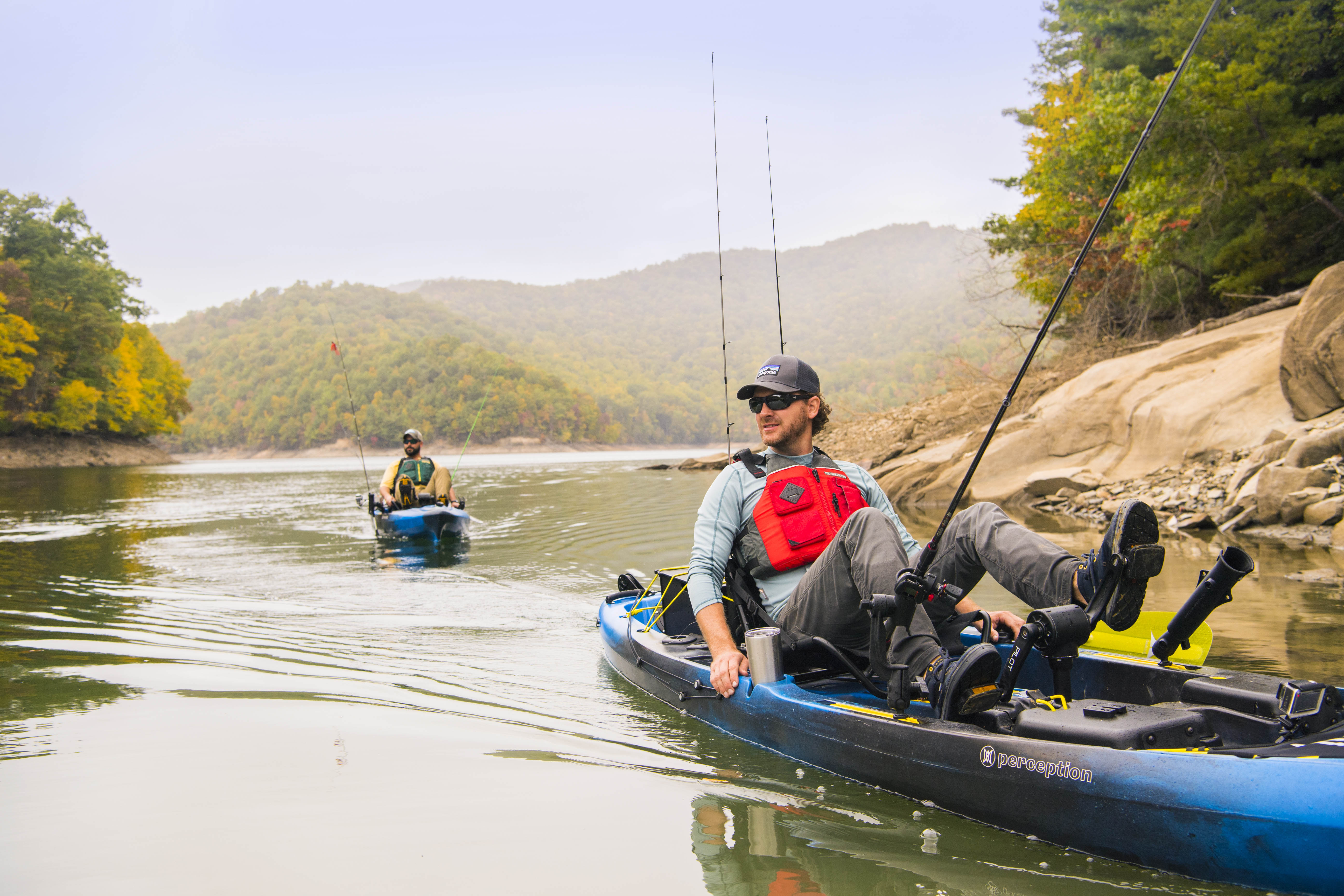 The tariffs aren’t bad news for everyone in paddlesports. Companies that manufacture outside the United States will gain a competitive advantage in the EU and Canada, and only Chinese-made boats face a corresponding penalty on U.S. sales. “We will be blessed with increased sales since our already attractive selection and pricing is enhanced by the Great Wall of Europe tariff aimed at the U.S. manufacturers,” says Mark Hall of Quebec-based Kayak Distribution, which manufactures Riot and Boreál brand kayaks in China and ships them worldwide. That’s a bitter pill for companies that bet on U.S. manufacturing as competitors chose to move production overseas, particularly to China and other parts of Asia. Jackson Kayak, Confluence, Johnson, Legacy, Lifetime and Hobie are heavily invested in domestic factories. Outsourcing is not an option for them in the short-term.

Companies that contract their production are not so constrained, and at least one has already moved offshore. Soul Waterman CEO Corran Addison says the EU and Canadian tariffs reinforced his decision to move production from the U.S. to China. Addison, a South African-born designer who lives in Montreal and sells boats throughout North America and Europe, is emblematic of the paddlesports industry’s global nature. He says he moved his roto-molding operations to China after five different U.S. contractors failed to meet his requirements. Ironically, the inconsistency of contracted manufacturing, both in the U.S. and overseas, is one reason many U.S.-based kayak companies have invested in their own manufacturing facilities, where they maintain full control over production and quality. That’s been a winning formula for American paddlesports companies, especially as the cost of overseas production has risen to rival that of U.S. manufacturing.

None of the U.S. boat builders we spoke to want to leave the States, but the tariffs may force their hands. “In the short-term you do your best to compete and ride it out,” says John Maas, Product Marketing Manager at Lifetime Products and Emotion Kayaks, which makes blow-molded kayaks in Clearfield, Utah. “In the long-term, you evaluate expanding production within the E.U. to bypass the tariffs.”