As a competitive whitewater kayaker, it has always been my dream to stand on top of the podium for a professional competition. In May 2016, I achieved my goal. I won the pro women’s category at CKS Paddlefest, a freestyle kayaking competition in Buena Vista, Colorado. I was so excited about my win, I didn’t even notice the envelope of cash handed to the men’s winner was twice as thick as mine.

The same thing happened in 2017 at Montreal Eau Vive, a multi-stage competition on the St. Lawrence River in downtown Montreal. The competition hosts two big wave freestyle events and a big water boatercross, with Jet Skis and jet boats as shuttles to and from the waves. There is always a strong turnout of athletes at the event.

As I was called up to stand on the top block of the podium, the event organizer announced, “And $500 prize to the pro women’s category winner!”

I was ecstatic. It paid for my travel expenses, entry fee, camping fee and food for the weekend. I came out of the event with my bank account unchanged. I was stoked—until the men’s winner was announced.

A thousand dollars was awarded to Nick Troutman, who took the top spot in the men’s category. Nick and I surfed the exact same waves and raced the exact same boatercross rapid. We paid the same entry fee, and we each earned the top spot in our respective categories. And yet, I got paid just enough to cover my expenses for the weekend, while he left with cash in his pocket.

The gender pay gap in athletic competitions is not unique to whitewater kayaking.

Last summer, the surfing world heard outcry when the Billabong Pro Junior Series paid the male champion twice as much as the female champion. A photo of the two holding their respective prize winnings went viral as commenters argued both for and against the World Surf League’s unequal payout. “Did the girls surf a different ocean that was easier we don’t know about? This is pathetic!” one online commenter wrote.

Event organizers justified the gender pay gap by saying there were fewer female competitors than male competitors, and therefore less female entry fees going into the pool for prize money. World Surf League Australia manager Will Hayden-Smith told SBS News that, “Men get double the prize money only because there are double the competitors.” I’ve been given the same reason every time I’ve been paid less than a man in a kayaking competition.

Being paid less than the male category for the same competition result is the same as being publicly told I’m less valued. This is a slap in the face. If we want to increase the number of female competitors in an event, we need to pay them as if we want them there.

“No matter gender or discipline, we compete in the same sport, on the same river and feature,” eight-time Freestyle Kayak World Champion Claire O’Hara told me.“We pay the same entry fees and complete the same training and preparations. It’s not the competitor’s fault there are fewer entries in one class than the other. Discriminating based on this factor is so far behind the times. I would love to see the sport ensure athletes are rewarded equally for their achievements.”

Being paid less than the male category for the same
competition result is the same as being publicly told I’m less
valued. If we want to increase the number of female competitors
in an event, we need to pay them as if we want them there.

The gender pay gap is also not unique to adventure sports. Since 1991, the U.S. women’s soccer team has won four World Cup titles and four Olympic gold medals. The U.S. men’s team has won neither. According to CBS News, “For the 2015 [Women’s World Cup] Final, an estimated 30 million people watched on TV in the U.S. as Carli Lloyd’s three goals sealed a huge win against Japan. It was and remains the highest rated soccer match in American history, including games played by the U.S. men.” And yet, the U.S. women were being paid one third as much as the U.S. men. In March 2019, the team launched a lawsuit for equal pay.

Last June, Forbes released “The World’s Highest Paid Athletes” list for 2018. This list breaks down the top 100 highest paid athletes in the world based on their prize winnings, salaries and bonuses earned between June 1, 2017, and June 1, 2018. No women were on the list.

With statistics like this, it comes as no surprise competition rosters see far fewer women than men. How are women supposed to afford the costs of training, travel, coaching and competition fees if they are at a financial disadvantage from the start?

Just three percent of TV sports coverage is devoted to women in the United States, according to Cheryl Cooky, a Purdue University professor and co-author of a 30-year study on the quality and quantity of men’s and women’s sports coverage. In an article about the U.S. Women’s Soccer Team published by The Atlantic, Cooky says our perceptions of how interesting women’s sports are have come from the media itself.

“Audiences will not get excited about women’s sport as it gets minimal exposure in the media, and the media would justify the lack of coverage by saying female athletics do not generate enough audience engagement,” agrees Valeria Perasso, a news correspondent at BBC News.

In freestyle kayaking competitions, the competition format goes like this: Junior Women compete first, followed by Junior Men, followed by Pro Women, and then Pro Men. The male category always competes last. It’s the headlining act. With the male category almost universally highlighted by the media as the main event, it receives more engagement than the women’s category, and entire sports get mischaracterized as “predominantly male.”

Our own media is part of the problem. The editor of Kayak Session, Anna Bruno says since she has been in charge, there has been just one female athlete featured on the magazine cover. Almost 20 years of Rapid magazine has seen just one female whitewater paddler featured on the cover—in a swimsuit. No wonder there are fewer women kayaking than men—it’s portrayed as a male sport.

It is clear the gender gap in athletics and whitewater—in media representation, participation numbers and prize money—stems from the much larger issue of inherent sexism in our culture. What can we do to fix it? Equal prize payouts for male and female categories is an excellent place to start.

A big wave freestyle kayaker, Brooke Hess is from Missoula, Montana, and a member of the U.S. National Freestyle Team. 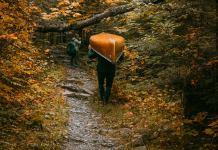 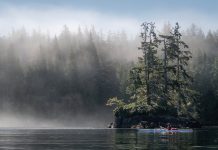 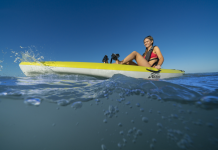 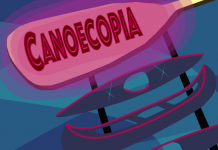