When you have seals crawling up onto your front lawn and spray from the Tasman Sea breaking over your roof then you know you live close to the elements.

I moved into my house on the west coast of New Zealand 25 years ago. The previous owners sold it when their long-drop toilet fell into the sea. They thought their crayfisherman’s cottage would be next and they were glad to get rid of it.

I was enchanted by the incredible view. I stood on the golden beach and watched the rollers slamming into defiant rock pinnacles and I decided I’d rebuild it from the piles up.

I started mixing sand, cement and beach rocks by hand. Then I bought a cement mixer and built up walls in front of the house. I must have poured 70 square metres of concrete over the years. Now the waves don’t crash over the house anymore, but I’m still privy to such a dynamic environment, right on my doorstep.

Inside, the house is done up quite simply. There’s one main room with the kitchen, my bed and a sitting area, with double glass doors

that open onto the sea. There’s also a small study, a garage and an upstairs snuggery, or loft, where guests can crawl up a ladder and sleep. There’s a shower, and the toilet is in the back of the garage. The position of the car means that any unsuspecting person walking in only gets a view of your head.

Above the car, my five Nordkapp sea kayaks and a k1 are hanging from the roof. They mean a lot to me as they accompanied me on my vari- ous sea kayaking expeditions including around Japan, around Alaska, and several thousand miles in Greenland. The Nordkapps I paddled around Australia and New Zealand are on permanent display in those countries’ respective National Maritime Museums.

The study is full of thousands of books. I collect books about kayaking and the Arctic and love go- ing to secondhand book shops searching for rari- ties. I’m also passionate about opera and usually have Boito’s Mefistofele blaring out of the house.

In between kayaking trips, I used to work as a mining geologist. It wasn’t unusual for me

to be picked up to go to work by helicopter. At low tide, the pilot would land on the beach, and at high tide, he could just get two-thirds of the skids on the lawn, and I’d jump on.

I can’t imagine living anywhere else. I reckon I’ll fall off my perch here and they’ll find me on the lawn with the seagulls picking my eyes out. In the summer, I can wander round naked all day, take my wave ski for a surf outside the door, then relax in my outdoor swimming pool right on the brink of the sea. I watch the sunset with a glass of red or a medicinal dram of whisky. What could be better?

Paul Caffyn made sea kayaking history with his 60-day circumnavigation of Australia in 1981. He has also paddled around New Zealand, Iceland, Alaska and Japan. 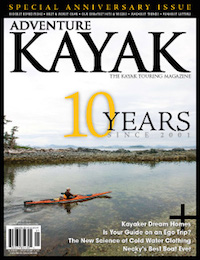 This article first appeared in the Spring 2010 issue of Adventure Kayak Magazine as part of a feature on kayak dream homes. For more great content, subscribe to Adventure Kayak’s print and digital editions here.