The long-time journalist and photographer, 58, quit his job and was the first to accomplish what no other person has done—canoe around Lake Huron. The 1,200-kilometre solo circumnavigation, inspired by the iconic canoeist, Verlen Kruger, is part of dream to canoe all the great lakes.

Talking with the self-assured yet humble Brede, no one would have ever guessed he had reservations about being able to complete the trip. On september 19th, 2009, 12 weeks after waving goodbye from the western tower of the Mackinac Bridge, Brede rounded Lake Huron, conceding that, “instead of washing out, I was sucked in.”

I spent years dreaming about this trip, ever since I read an interview with Verlen Kruger, late in his life, about a challenge he wished he could have undertaken—to circumnavigate the Great Lakes. Although Kruger likely paddled as many miles of Great Lakes shoreline as anyone, paddling the entire loop remained undone when he died in 2004.

I discovered a Kruger Sea Wind on Craigslist for $3,500. Back in Michigan, my wife, Ruth, and I started taking our solo Krugers on day trips around Little Traverse Bay. The boats handled beautifully, and I began to believe I could make it around at least one of the Great Lakes.

My body needed to go outside and stretch. My ego wanted to do something no one has ever done. I wanted to come to Canada because the canoe is revered for its role in the nation’s history.

You assume all responsibility in a solo boat. River right or river left. Pry or draw. Go for it, or portage. Tandem paddlers engaged in the “blame game” have ruined trips and friendships. If couples paddled solo boats, “Divorce River” would likely disappear from maps.

It was suggested that I look for sponsors, but I felt better going “no logo.” A boatload of gear purchases later, I quit my job, poked a peace pin on my PFD, and stenciled “Around Lake Huron 2009” on the stern.

Mosquitoes were my nemesis. Michigan has about 60 species of mosquitoes. One evening, between the mesh body and the fly of the tent, I counted 200. I squashed them all, and within five minutes another 200 filled the space.

Initially, I stayed close to shore. As I gained confidence in my canoeing ability and the weather forecasts, I began paddling from point to point. My longest open water stretch was about nine kilometres, when island hopping from Tobermory to Manitoulin Island.

I wasn’t afraid, but was very cautious. I always wore my PFD, which had a knife and whistle attached, and signal mirror, SPOT locator and cell phone in its pockets. A couple of times, when the waves were big and I felt there was a chance of swamping or capsize, I clipped on my VHF radio, strobe light, and a 15-metre floating orange banner I could deploy. I would also clip my bow line to my PFD, so I wouldn’t become separated from the canoe if I went over.

Her name is Seaweed. Derived from the canoe model name Sea Wind, her colour green, and the old hippy at the helm. I hesitated, however, when the Canadian border officer asked, “What’s your boat’s name?” I figured Seaweed might raise a red flag. Our website, greatlakescanoe.com, is stenciled on the canoe, so I told her Great Lakes Canoe.

I wish I could have brought national health care across the border when I returned to the U.S. I had asked about 15 Canadians what they thought of their health care system. They all said that while it wasn’t perfect, they were glad to have it. I also asked if they would consider trading it for the U.S. system. Everyone answered that with a resounding “No!”

The one camping meal I never tired of was breakfast—a cup of tea and granola from my local food co-op, mixed with fresh fruit and powdered milk. The best fish and chips I had was at Purdy’s Fisheries in Grand Bend, Ontario.

It felt like my days were spent floating in outer space and as the sun set I returned to earth for the night.

My advice to canoeists wishing to take on an expedition is to read all you can by, or about, Verlen Kruger, Valerie Fons, Joanie and Gary McGuffin, Cliff Jacobson, Bill Mason, Becky Mason and Howard Rice. Study wind and waves. Pack light. Leave no trace. Wear your PFD. Have faith in the kindness of strangers. Breathe.

My next canoeing adventure is to paddle around a second great lake. 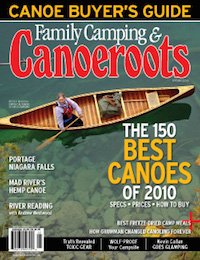 This article first appeared in the Spring 2010 issue of Canoeroots Magazine. For more great content, subscribe to Canoeroots’ print and digital editions here.