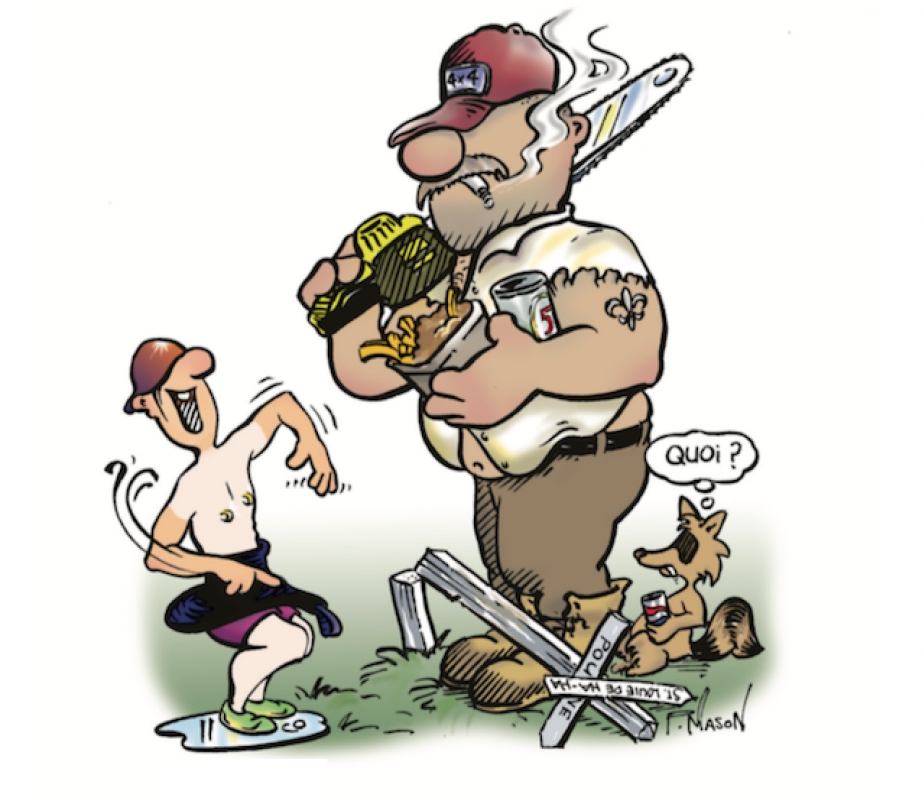 There are many obstacles to paddling in Canada: variable water levels, seasonal issues (a.k.a. winter), the Prairies, and the fact that all the great rivers are in Quebec!

Quebec’s beautiful, sure, but the people smoke like chimneys and drown fries in gravy and cheesy curds. They pride themselves on that stuff. “Vive la difference,” they say. When you’re there, you’re different. You’re the “squarehead”—the outsider. And there’s nothing that protects their rivers from us paddling squareheads more than the language problem.

Driving to the rivers in Quebec is almost impossible. They all drive like maniacs. The drunken streetlights lie on their sides, and who knows if and when you can turn right on a red? Worst still, you’ll be following translated directions from one of your French paddling friends. The sounds “h” and “th” are very tricky for them to say. So a sentence like, “Head through the thoroughfare then hang a hard right to the thruway for half an hour” comes out like, “Ead roo dee orrow pass, en ang a ard right to dee drooway for aff an our.”

You thought he said, “Dead Rudy passed away, his angered wife is a drooling wafer shower,” and you’re thinking, “Who’s Rudy?”

Your friend’s map scribbled on le hotdog napkin says turn on Rue Tabernacle, but the road sign is nonexistent. So you’re lost. That’s a problem anywhere. But in Quebec it’s a problem with a particularly dire edge to it—when you finally ask for directions, no one in la belle province seems to speak English. You’ll be disappointed to know how 10 years of public school French amounts to no help what-so-ever. “Au claire du la luna” or “Frere Jackass” don’t amount to much when you’re deep in the pepper pickies.

Reluctantly you’re forced into roadside charades. You’re in the woods, lost, confused and hungry and you’re dancing in tight black fuzzy rubber trying to show, with your body, the words you cannot say in French. Try acting out W-A-T-E-R-F-A-L-L, P-U-T I-N and B-O-O-F to a grizzly lumberjack wielding a chainsaw in one hand and a cigarette, a can of 50 and a family-sized poutine in the other. You might be surprised to find out how much it looks like you’re saying, “I want to sleep with your wife.”

The language barriers don’t stop at the put-in—if you make it that far. Paddling requires knowledge and communication. It’s important to know where the blind drops are, where the sieves are, that sort of stuff. And all those peppers know this stuff, of course, but it’s locked in their tetes (no, not teats).

You ask them, “Hey Jean Claude, Guy, what’s around the corner?” And they just smile and nod. That’s their answer. But, my Anglo friends, it is the wrong answer. I once asked a guy, “Francois, will I surely die if I paddle around this next bend?” He just smiled and nodded.

Maybe the paddling peppers know exactly what you are asking. Maybe they don’t want to give us directions to the best lines, choice campsites, and funkiest discos, so we won’t come back. After all, we all like to keep our favourite runs a secret, don’t we?

That’s why when an American asks, “Y’all know wheres I can find the Ah-to-wah-wha Rivah?” I tell him to head north past the guys in toques drinking beer and playing hockey. When you see the beavers, go west. This, my Yankee squarehead friend, is where you’ll find all the best paddling—Saskatchewan! 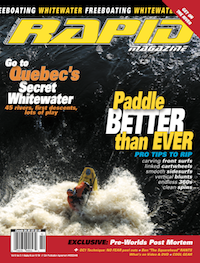