For many, sea kayaking is synonymous with quiet paddles into the sunset and multi-day trips on scenic coasts. Lovely, challenging even, but not exactly thrilling. That’s changing.

Over the past five years, interest has exploded among a growing subset of paddlers in a more adrenalized aspect of the sport: rough water sea kayaking.

Sea kayaking in rough water isn’t new. Small pockets of paddlers have been taking long boats out to play in surf, rock gardens and tidal races for over 25 years. When Stan Chladek founded the infamous Gales of November on Lake Superior in the mid ‘80s, the annual event drew up to 50 of the sport’s top paddlers, including Nigel Dennis and Dave Ide.

Recently, these humble beginnings have been eclipsed by a mainstream fascination with rough water, as more casual paddlers discover the joys of playing in waves.

But why now, and where is this bumpy course headed?

Boat design has played a quiet role in shaping how paddlers get out and play. Five to 10 years ago, the dominating sea kayak designs were high volume boats designed for stability, speed and straight-ahead touring. There was a perception among manufacturers that paddlers were only interested in going on 10-day trips, and the designs reflected that idea.

“Sea kayak manufacturers used to be really slow to react to the changing needs of paddlers,” says Keith Wikle, creator of the sea and surf kayak website, Gokayaknow.com. “ They would release a boat and freeze the design, going a long time without any updates. Valley Kayaks, for example, used to have a really ancient line-up.”

That design deep freeze has begun to thaw. The selection of low volume boats specifically designed and built to perform in surf and around rocks is the greatest ever. Several companies—including P&H, Rockpool and Sterling kayaks—are on the cutting edge and have released innovative boat designs aimed at performance-oriented paddlers. Valley, which still offers the Anas Acuta—first released in 1972 and one of the very first commercially produced sea kayaks—is also launching a brand new play design this year.

“Sea kayaks are changing,” says Rowan Gloag, producer of The Hurricane Riders rough water film shorts. “Speed, tracking and rudders are being replaced by rocker and maneuverability. This doesn’t mean that existing designs are flawed, but it does give people more options based on the type of paddling they choose to do.”

The availability of training and suitable gear have also influenced the popularity of rough water paddling.

“The BCU [British Canoe Union] craze that hit the United States in the mid-90s was a result of the credibility of this type of kayaking,” says Wikle.

North American BCU coaches who trained in the U.K. emphasized skills and safety in rough water and current. They brought that rough water experience and the equipment that goes with it—boats and safety gear—with them when they returned home. Wikle says some now-popular rough water gear— such as helmets and rescue PFDs with integrated tow systems— was also adapted from whitewater or swiftwater rescue.

Today’s healthy crop can be traced back to 2004’s groundbreaking film, This is the Sea, from Welsh filmmaker Justine  Curgenven. Of course, Curgenven wasn’t the first to make a sea kayak film, but she was one of the first to mount cameras on the boats and send paddlers—herself among them—out in tidal races.

We were no longer watching paddlers from shore; we were right there paddling and hooting down the waves with them.

This is the Sea presented a different vision of sea kayaking. The film inspired countless paddlers to think about sea kayaking as more than just a mode of transportation or an activity for calm waters. Among them were other filmmakers, notably Bryan Smith who took production and cinematography to a whole new level with his films, Pacific Horizons and Eastern Horizons.

“Bryan Smith and Justine Curgenven’s DVDs were a major influence in the creation of The Hurricane Riders,” says Gloag. “I’ve lost count how many times I’ve watched Pacific Horizons. One of THR’s goals was to share rough water paddling—an amazing and visually stunning aspect of sea kayaking—with as many people as possible. Through YouTube, THR has reached over 115,000 people around the world.”

Too Much of a Good Thing?

With popularity and interest at an all time high, some fear that rough water paddling could tarnish the overall appeal of sea kayaking.

“My concern is that this image of sea kayaking will dominate and scare folks away from the sport,” says Michael Pardy, instructor, guide and owner of SKILS paddling school.

Sea kayakers need only look to their river cousins to see how a similar scenario played out in whitewater kayaking in the mid-90s. The whitewater community became gripped by a hot new craze called playboating. It looked fantastic in print, so an eager media helped proliferate the idea that you had to be out in the biggest, baddest whitewater to have fun. Unfortunately, the sport’s gnarly image had an unintended effect. Over the next 10 years, new whitewater paddler participation dropped significantly.

“One related concern,” continues Pardy, “is the potential shift away from touring-oriented training toward rough water paddling.” Overall, he sees this departure from sea kayaking’s roots as a “mixed blessing.”

Keith Wikle disagrees, “I think the popularity of rough water sea kayaking can only be a good thing. It means that more people are excited about paddling and pushing their comfort levels a bit.” He says sea kayaking needs to shake its reputation for being “a lame sport for old graybeards in Tilley hats.”

“The more we excite people about sea kayaking’s dynamic potential, the better.”

Gloag echoes Wikle’s sentiments, “I have learned more techniques paddling Skookumchuck [tidal race] than I ever thought were possible in a sea kayak. I am the paddler I am today because of rough water.”

The next five years will no doubt witness some big changes in the world of rough water paddling. Expect the combination of more participation and increased media awareness to produce innovators and leaders who will take it to a whole new level.

“Twenty years ago, just sea kayaking was exciting. Now, that’s not enough,” says Pardy. “We see this trend in nearly every adventure sport—skiing, climbing, cycling and surfing have all fostered specialized sub-disciplines, along with their associated iconography, idols and tools.”

Boat deisng is going to continue playing a key roll in shaping the sport,” predicts Wikle. He says new play sea kayaks like the Romany Surf by Sea Kayaking UK and P&H’s Delphin exemplify a trend toward incorporating design cues from whitewater and surf boats, such as planing hulls and carving rails.

Wikle believes we’ll continue to see more highly rockered sea kayaks in the 15–16-foot range—considerably truncated from the traditional 17–18 feet. “These features are really critical when you want to accelerate down-wave quickly, pivot off the crest or carve turns.”

Growth will also come from the paddling community itself.

Pardy predicts the rough water community will be globally known but regionally based.“Most folks involved in this sport are day adventurers, so it will be popular in regions with easily accessible, relatively predictable rough water near larger popula- tion centers.” He believes California, the Pacific Northwest and the U.S. Northeast are likely hotspots.

“We are at the base of the mountain and we have a long way to go before the summit,” Gloag summarizes.“Through creativity and a willingness to push this sport, the next few years will be very exciting for rough water paddling.”

David Johnston is a sea kayak instructor and creator of the outdoor industry resource site, paddlinginstructor.com. 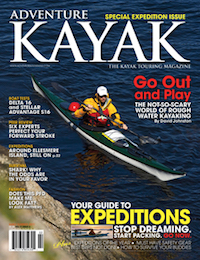