What would happen to a fully loaded kayak if the waterproof hatches catastrophically failed? We conducted this test to find out.

First, we loaded a kayak for a two-week trip (55 kilograms of gear and a 68-kilogram paddler). We used eight dry bags very carefully closed with most of the air squeezed out— some air retained for buoyancy—and the roll-top closures rolled at least two full rotations.

Then we flooded the day hatch, and progressively flooded all the other hatches and eventually the cockpit. With the day hatch flooded, the kayak was still stable and maneuverable.

With the rear hatch and day hatch flooded, stability became difficult and maneuvering became slow and awkward. With the cockpit flooded, the kayak became unmanageable, with the rear edge of the cockpit coaming below the surface.

With the front compartment flooded, the kayak was completely swamped.

The best results for recovery after a capsize occurred when the paddler entered the water and tilted the kayak onto its side. The front compartment retained only six liters. The day compartment 10 liters, and the rear compartment 15 liters. We could then put on the hatch covers, re-enter the kayak and pump most of the water out of the cockpit. This made the kayak unstable but marginally maneuverable. However, this rescue would be very hard to perform in rough seas. Also, pumping out the cockpit was very difficult, even with a foot pump.

Finally, the gear in all eight dry bags was soaking wet, including important items like warm clothes and sleeping bags. This is disappointing and hazardous in itself and also means that the floatation would have decreased with the continued intrusion of water into the dry bags.

Always check the water tightness of your hatches and make your gear bags as waterproof as possible to improve your chances in the case of a flooded hatch. 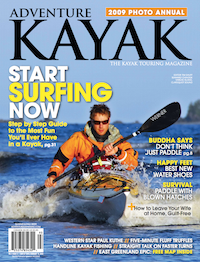