A dark wind line rose across the Salton Sea, howling west to east and engulfing us in frigid whitecaps. Seeking meager refuge on Mullet Island, we slogged three miles further to the craggy, guano-covered islet in California’s largest lake.

After dragging our kayaks and standup paddleboards up the island’s leeward side, we ducked inside the only manmade structure in sight—a bunker-like, roofless cubicle that acted as a much-needed windbreak against the winter chill. Frozen fingers fiddled with maps and GPS, searching for a decent campsite. We were in the midst of exploring the briny, 110-mile shoreline of this bizarre, manmade lake in southeastern California’s Colorado Desert. Our progress stalled, our group of five paddlers crusted in salt and struggling to stay warm, we began to question our sanity.

Formerly known as the Salton Sink, flooding on the Colorado River breached levees and dikes in 1905 and again in 1907, transforming one of the lowest elevations in North America into the Salton Sea. The body of sparkling water that eventually developed was a boon for the region that lasted for over 50 years. The Salton Sea became a Mecca for weekenders, boat races, waterskiing and fishing tournaments. Hollywood celebs like the Marx Brothers, Jerry Lewis and Frank Sinatra frequented the sea’s shores. For a while, the Salton was billed as “the next Las Vegas,” at one point receiving more visitors than Yosemite National Park. 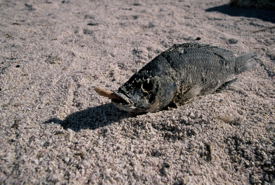 But the boom wouldn’t last. More flooding followed, stymieing further development and the resort atmosphere. Over the years, as the floodwaters have receded—and because there’s never been an outlet for the water—the Salton Sea’s salinity levels have skyrocketed. Scorching summer heat evaporates the water, leaving behind natural salts—the sea is now 25 percent saltier than the Pacific Ocean. During the summer when temperatures are consistently at triple digits, there have been mass die-offs of fish. Only the hardy tilapia remains, the sole species able to withstand such high salinity levels.

Come winter though, the Salton is a major stopover for migratory birds, making it an overlooked gem for paddlers. Over 400 species of birds have been documented here, with 80 percent of the entire American white pelican population wintering on the tranquil shores.

As we continued to shiver, we could see the plump white birds soaring in V-shaped formations over thermal plumes wafting skyward. To thwart the winds, the pelicans roosted close together on the sea’s knobby peninsulas. 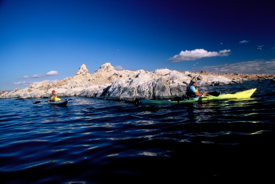 Only 100 yards east of Mullet Island was an expansive mudflat where the thermal plumes steamed out of boiling mud pots. The region is a natural geological wonder of extinct and dormant volcanoes and thermal vents. Three miles south of Mullet, black volcanic glass is embedded in the sharp rocks surrounding Obsidian Point.

We found the mouth of the Alamo River a mile south of our windbreak and camped there for the night. The runnel flows up from Mexico and feeds the Salton Sea, one of the few reliable water sources in the region. It was too shallow to paddle, so we waded and portaged our kayaks in ankle-deep water to the river mouth.

We tucked ourselves in the cattails and watched American avocets, western sandpipers, egrets and great blue herons wade in the shallows, the wind calming down enough for the birds to forage in the salty water and for us to pitch our tents without them taking off like kites. 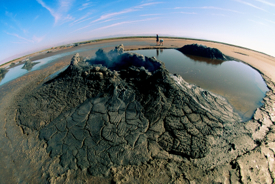 The next morning we paddled back toward Mullet Island, and then hiked across the mudflats to the boiling mud pots. I was barefoot, and the mud surrounding the boiling thermals was cool, but the pots were hot. We stayed upwind of the thermals and noticed we weren’t the only ones enjoying these unique geological features. Some shorebirds were also soaking in the warmth a good distance from their typical briny shoreline habitat.

Early the next morning we paddled 12 mile southwest to an abandoned navy site, where expansive sand dunes drifted 300 hundred yards beyond the shoreline. We beached our kayaks in a small cove with amazing views of the Santa Rosa Mountains National Wildlife Refuge to the northwest. Coyotes howled behind us in the well-manicured dunes as a hairy tarantula tiptoed in front of my tent. 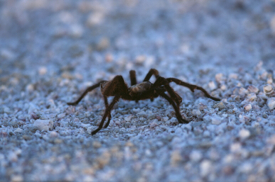 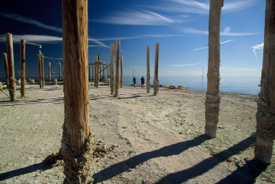 Shooting stars filled the night’s sky as a melody of lapping waves lulled us to sleep. In the morning, pink and purple hues eased across the mountains as we paddled down to the navy site. The scene was apocalyptic: brine-crusted, weather-beaten pilings leaned at drunken angles, cormorant nests clinging to their tops. Rusty, corroded beams lined the dock leading into the water.

The Chocolate Mountains loomed on the eastern horizon as we began a pre-dawn 12-mile crossing. Initially we aimed for what appeared to be an oil platform three miles off the shoreline, but as we drew near, we discovered nothing more than a wooden weather observation post ensconced in bird guano and cormorant nests. The desert plays tricks with scale. 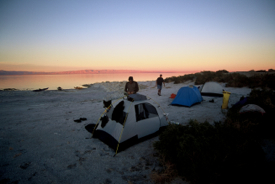 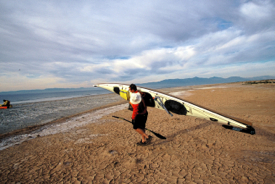 From there it was a long, uneventful crossing to the northeast shore. Halfway across the Salton Sea’s widest point, an annoying southeast wind picked up. Whitecaps sloshed over the starboard side of our kayaks. By the time we reached our destination, our kayaks looked like glazed doughnuts with thick salt crusted over every inch of their decks.

A large flock of American white pelicans had congregated in the shallows, plunging their yellow beaks in the water. They weren’t alarmed by our presence, barely ruffling their creamy white feathers as we hauled our gear to our trucks near the historic Salton Sea Yacht Club, built in 1962. 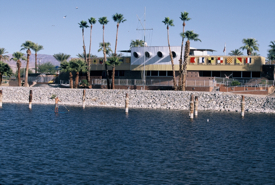 We grabbed our standup paddleboards and paddled inside the harbor beneath the yacht club.  The jetties forced the wind to lie down so we used old pilings standing in the harbor as a slalom course, racing from end to end. For a moment, we could almost imagine the Salton Sea of yesteryear, when glamorous weekenders—not just pelicans—flocked here by the thousands.

Camping is of the primitive variety except at the Salton Sea State Recreation Area, and seven miles south at the Salt Creek Kayak Camp. Constructed by the Department of Boats and Waterways, the camp has shade, water, barbecues, showers and bathrooms. There are racks to store kayaks and standup paddleboards. 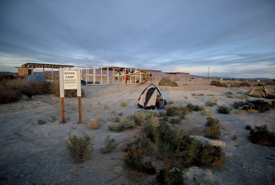 The best time to paddle the Salton Sea is from winter into spring, when bird numbers peak and temperatures are tolerable. Expect daytime temps in the 70s (Fahrenheit); nighttime temps can drop to freezing.

For more information on the Salton Sea, visit www.parks.ca.gov.

Chuck Graham is a paddler, photographer and freelance writer in Carpinteria, California. See more of his work at chuckgrahamphoto.com