From where I rested in a cliffside coyote den, my shotgun across my knees, I could see out across a yawning Owyhee Canyon. At the bottom, running thin and ragged, was the river itself. A guy could read the river like a book from high up on the canyon wall, but it was just jagged Braille down at water level. We’d spent six autumn days in this canyon in southeastern Oregon, canoeing nearly 100 kilometres of rocky riverbed from Rome to Birch Creek and, frankly, were having a hard time of it.

Running low in its boney bed, the high desert stream rattled through narrow clefts and boulder-studded channels. Each rapid we came across—and there were many—commanded us to pull ashore and scout. We ran a few and played safe with the rest, lining anything that looked dicey or gathering all six of us to hump our bloated hulls over spots where the boulders were just too close together.

Canoes had turned out to be the right choice of boat—rafts would be difficult to work through the boulder fields and inflatable kayaks don’t slip over rocks as well as hard Royalex—but our two 16-footers were nearly too big for the Owyhee this late in the season. We paid the price in busted thwarts, deep gouges and more grooves than a vinyl 45. Though still stable, the nearly lame Duck Hunter had to have its gunwales lashed together to make the distance.

After days of paddling, carrying, hiking, hunting and fishing we would huddle in the sand around a crackling fire, turning like flapjacks every few minutes to warm our backs or bellies. Solace seeped from a bottle of Bushmills we passed around while the water in our canteens froze up tight.

Though the river here runs through one of the least-populated regions in the lower 48, we were far from alone. Chukar partridge were thick as fleas on a cat and hanging low to the water. They live in the scree and rimrock on the canyon walls. We would routinely round a corner and find a covey of birds staring us down from the bank. It was an incongruous sight to see our hunters slip onto the earth-tone shore and give chase in their neon dry suits and PFDs.

Not having packed any dinners, we ate what we could shoot. Abandoned mines upstream had left a leeching legacy of mercury in the fish, so I knew what I wanted on my plate. Hiking out of camp with my shotgun on my back, I was looking for dinner no less earnestly than the eagle hunting his mouse. The alignment of function with purpose, of hunting to eat, was a powerful motivator. Granted, we hadn’t the predatorial focus of true canyon denizens like the coyote and the osprey; ours was a mere patch on the fabric of the primal imperative of hunting to survive. The satisfaction of feeding myself directly from the river canyon I was travelling through, without a thousand middlemen and miles between nature and my plate, brought me closer to a leaner style of life.

The den I was resting in was littered with small bones, fur and coyote scat. I fingered through the sand thinking I might turn up an arrowhead or chippings. I could imagine a hunter of long ago ducking in to escape the weather.

To the north I could see a thin plume of smoke rising from camp, which meant Cookie (he’s better at cooking than we are at giving nicknames) was firing up coals for the Dutch oven. Last I had counted we were a few birds short of a meal; it was time to get the two partridge tucked in my game pouch back to camp. I got up stiffly, shut the breech of my gun and looked for the best route to scramble down the ridge.

I could feel dinner pressing against my lower back as I hiked. In the distance, downriver, an old jeep trail scratched down from the rim, one of only two tracks leading into the canyon sanctum on this stretch. On a flat along the river two trucks were parked at a camp.

I’ve camped on rivers that way many times, driving in without worrying about tying gear to thwarts, pinning canoes against rocks and sustaining lower back pain. But we were on the Owyhee to feed ourselves from the land, not from a drive-through lane. Better to do that from a canoe than a truck. Headed toward the half-broken canoe on the bank I had a feeling the birds in my pouch would taste better than the ones the guys in the trucks had taken, even if they had bagged a few extra birds while we had our guns tucked away and our paddles out.

Rob Lyon is the author of ‘Water Marked: Journal of a Naked Fly Fisherman’ and lives on a small island off the Washington coast. 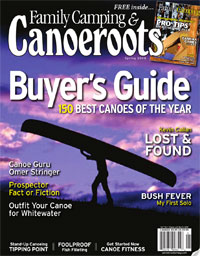 This article first appeared in the Spring 2008 issue of Canoeroots Magazine.