A sales manager, an engineer, an accountant, a ski coach, a pastor and a biologist paddle their canoes in the dark. It sounds like the start of a bad joke, but it’s actually just a scene from a recent hunting trip with Old Town.

In December of 2016, ten Maine sportsmen embarked on a multi-day duck hunting trip in Old Town canoes and kayaks covering Maine’s two distinct, and very different, regions. Day one took place on an interior lake in Penobscot County with the group looking for Mallards, Black Ducks, and divers. The second day brought the group to the rocky islands of Casco Bay, where Eiders, Scoters, Goldeneyes and Longtail ducks like to feed on oysters.

Conversations among Maine sportsmen are usually dominated by moose, deer, pike, salmon, and other popular game – but there is one Maine tradition that tends to fly under the radar in Vacationland: waterfowl hunting.

“The action of waterfowl hunting is so much better than any other type of hunting I’ve ever experienced,” said Sean Molloy, pastor and avid hunter. “To have birds come in and decoy around you – it’s thrilling and exciting, and a lot of fun.”

With help from Avian X, Zink Calls, Yamaha Motors, Jetboil, Filson and Goal Zero, the guys loaded up their Old Town boats and hit the water as Maine sportsmen have been doing for generations. 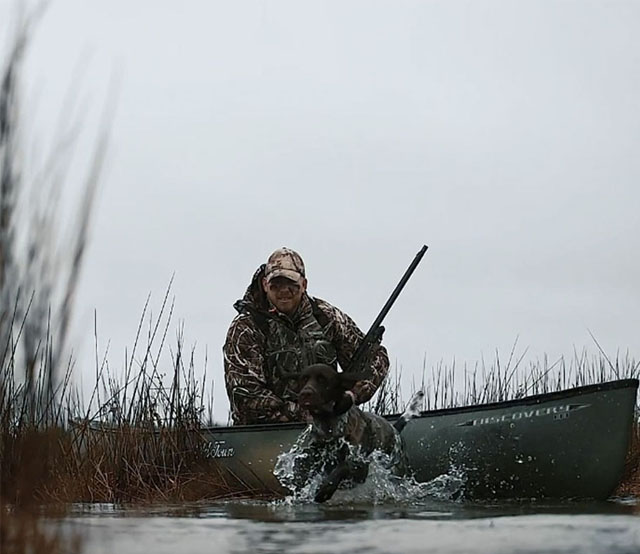 Old Town canoes are stable enough for you and your retriever.

Using a variety of boat types, the group was able to haul all ten hunters, decoys, a photographer and all of his camera gear, and various supplies for everyone. The Discovery 169, Discovery 133 and Discovery Sport 15 (outfitted with a Yamaha F4 outboard) did the heavy lifting, transporting camera gear, decoys and anchor systems, and a German Shorthair Pointer named Echo, with ease.

Growing up, Maine Master Guide Jeremy hatch always used an Old Town Canoe, a tradition he is proud to keep alive today. He was quick to realize the benefits of hunting from an Old Town.

“When it comes to loading two dozen decoys, dogs, you can really load up and put in a lot of materials,” he said about the Discovery 169. “When you get into high water it can really give you a safer platform to hunt out of. I know these boats are being designed and built by folks that are using them for the same reasons I am, and it shows in the final products.”

The Predator kayaks, designed specifically with waterfowlers in mind, provided an all-in-one hunting platform. The hunters were able to transport blind bags and shotguns on the deck and fill the click seal bow hatch with decoys, food, water, and blind-building materials. 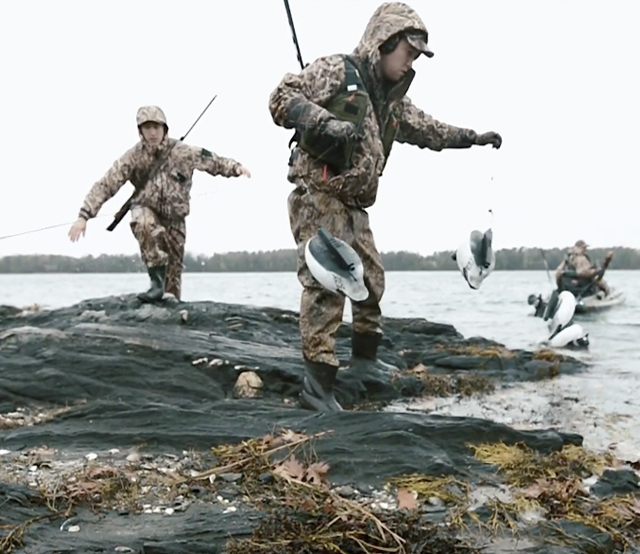 Old Town boats can get you to locations that no other boat can. Photo by Old Town.

“Hunting out of a kayak certainly helps my access. There’s plenty of room to fit all of my decoys, my gear, my cases of shells. I’m able to get to parts where people with motor boats aren’t able to get to. Setting longlines in the dark is no easy feat, but with the PDL I was able to get our spread set up in a matter of minutes.”

Once the decoys and gear were ready to go, it was time to get into position and wait for the ducks to fly. By backing the kayaks into tall reeds and grass, adjusting the Element Seating System, and throwing some grass and mud over their legs, the hunters virtually disappeared into their surroundings. And when it came time to retrieve a fallen duck, the Predator made it quick and easy.

Duck hunting requires a lot of gear – a typical spread can contain several dozen decoys, blind building material, and ample ammunition for a full day of shooting, which creates a roadblock for many potential hunters. How are you supposed to get all of that gear to a remote location on the water? Walking longer than a couple hundred yards loaded up with gear is exhausting and time consuming. Larger boats offer the capacity to transport everything, but accessing marshy and muddy locations can be nearly impossible, and concealing your boat from curious birds can be tricky and expensive. 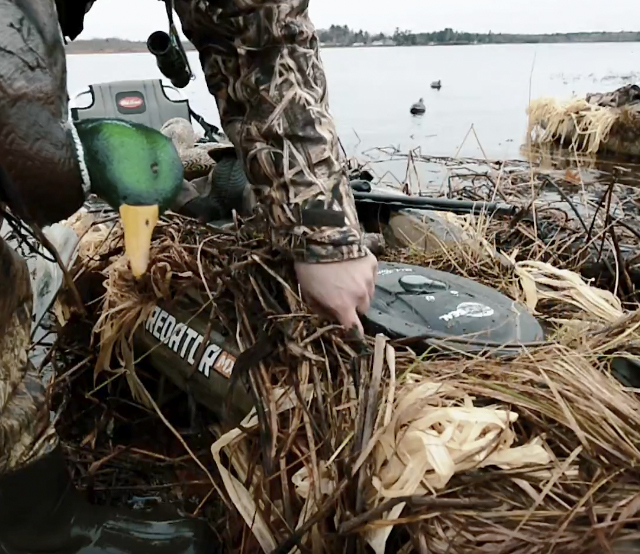 The Old Town Predator is perfect for waterfowl hunting. Photo by Old Town.

“There are places I hunt that I just can’t get to by walking or by having a big boat,” claimed Molloy. “The kayak gives me the ability to easily get to where the birds are.”

Old Town canoes and kayaks, designed specifically with sportsmen in mind, make it easier to transport gear, access rugged and remote locations, and give hunters a safe platform for hunting in nearly any conditions.

When the group returned to the boat launch on the afternoon of day two, the results were pretty clear. Mallards, Eiders, Longtail, and a Goldeneye all served as a testament to not only the bounty of Maine’s beautiful waterways, but the versatility of the Old Town canoes and kayaks that make them more accessible.

Enter my video
Previous article
How To Ferry Your Kayak In Current
Next article
Video: Home of the Vikings