The first thing I notice about Clipper Canoes’ MacKenzie 18’6 is its size. I could go on a very, very long canoe trip with this canoe. And I could bring many, many things.

When I pick up the 18’6 at Jenda Paddlesports, I can tell owner Jason Kirby is a fan of this design—he’s also Clipper’s Eastern-most dealer in the country.

The canoe’s 37-inch width is just beyond the width of my factory roof rack—and almost as wide as the roof of my Subaru wagon.

It’s the perfect boat to take on a late fall canoe trip, and has more than enough space to carry a couple canoe packs and a canvas tent with wood stove. Clipper claims the 18’6 will carry 1,400 pounds while maintaining seven inches of freeboard. This factor makes it a favorite among expedition paddlers as well as big game hunters, according to Clipper.

“This is one of the only boats I’d feel comfortable flipping over and standing on,” Kirby tells me as we’re tying it down. “We can even both stand on it,” he offers.

Strength and design durability are characteristics Clipper canoes are known for. Named after Canada’s longest river, the MacKenzie series was designed by the late canoe designer James van Nostrand. The first offering in the series was a 20-foot monster version; this 18.5-foot family truckster followed in 2004.

“The MacKenzie series came from the desire for a bigger, more seaworthy design that could be paddled by two and carry a lot of gear,” says Marlin Bayes, co-owner of Clipper Canoes.

“We recommend the 18’6 for a family with two kids on extended trips or on the ocean,” he adds. Clipper also manufacturers the MacKenzie design in smaller sportsman models, and also with square sterns.

Approaching its 40-year anniversary, Clipper Canoes remains a family-run business. In 1976, Bayes and wife, Mary, founded the company in the basement of their Abbotsford, British Columbia home. Since then, they’ve become the largest manufacturer of canoes in western Canada—their catalog includes boats from 14 to 44 feet long.

On the water, the performance of the MacKenzie 18’6 is impressive. With such width, its stability feels endless. I’m pleasantly surprised by its speed; minimal rocker combined with a long waterline makes it track true and fast.

I’m used to kneeling, but the MacKenzie’s molded bucket seats are placed low, so I don’t feel like I need to kneel for stability, even in moderate waves.

A stable five-point brace can be achieved for rough water paddling by adding thigh foam pads and bracing feet in standard foot braces or on the bow tank.

“You almost have to throw yourself out of the boat to tilt it very far,” says Bayes.

The bow seat features Clipper’s friction-fit system, which allows the seat to be adjusted forward and back while on the water by simply lifting my weight, then sliding the seat along two parallel bars. When sitting, my weight keeps the seat firmly in place. 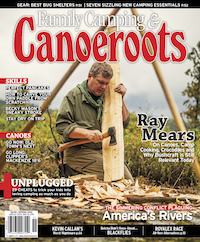