I’m looking forward to telling you what I think of the new Machno from Pyranha. But first I’d like to invite you to take a brief pop quiz. What is the Machno named after? Is it a) a merger of mach no (short for number) indicating it has super sonic speed and is a machine of superior ability? Or is it answer b) Machno Carwyn—regarded by some as the best show jumping pony in Europe, and perhaps the world? Or lastly, could it be c) a tributary of the fabled Fairy Glen that was the spawning grounds of this new river running machine? Before you commit to an answer, read on.

I’ve tested some of Pyranha’s other river running boats, including a few editions of the Burn with its playful hull, precise edges and the long, narrow and race-ready 9R. I was curious as to where the Machno would fit in Pyranha’s lineup.

“The Machno is a river running creeker that replaces the Shiva building on a few design cues from the 9R and Shiva,” says designer Robert Peerson. From the Shiva it takes its softer edges, round side walls and high volume. Pyranha incorporated some of the extreme rocker of the 9R bow to the Machno’s bow and stern for a dry ride that is meant to keep you on top and moving over features.

Pyranha’s Machno is available in medium and large sizes. The medium we tested is 8’8”, about six inches longer than a medium Burn III and with 10 gallons more volume. Compared to a 9R it has a bit more volume but is three inches shorter. Peerson explains they’ve designed the Machno with a wide and mostly flat semi-planing hull, with soft rails and highly rockered ends. So what does this mean on the water? Predictability and confidence.

The Machno is kitted out with Pyranha’s second generation Stout system, including robust, adjustable thigh grips, oversized, deep fill padded hip pads and an add on thigh hook that gives additional outside thigh support. If you need more inner thigh hook you can rotate the thigh brace to accomplish this, a feature Pyranha added to serve a wider range of paddler sizes. It is simple and effective and feels solid all around.

Slipping into the boat and looking at the bow I immediately noticed a few things. It’s not a stubby little nub like a playboat but also not so far away you couldn’t see it without binoculars. It’s always a tradeoff between speed and maneuverability. Long goes fast, but doesn’t turn. Short turns but doesn’t go fast. I think Pyranha hit the mark perfectly for a Class IV/V river runner.

While not as fast as its 9R racing sibling, it has more than enough get-up-and-go to zip around the river with confidence. In high water, on pushy spring sections of the Petawawa River I could hold my line well but was still able to quickly change course when needed thanks to the highly rockered bow. The rocker effectively shortens the boat and gives me the spinning and turning ability I want when navigating those tighter creeks.

I also love the ease in which I could move around the river. When boats get a bit too long it can make ferries challenging as once you lose your angle it’s impossible to get it back. The Machno was easy to control, its angles ensuring I ended up where I wanted to. I was also able to use the semi-planning hull to catch small features and surf across the river without losing any ground.

The Machno is a very stable boat when sitting flat and it’s not the kind of design you need to tilt over very far to tap into its carving ability. The Machno has soft rails along the edges of the boat so don’t expect aggressive hard carves like in a playboat. Instead I found nice, smooth eddy turns that were quite predictable. The edges aren’t grabby which means less chance of catching on chaotic currents or tripping over rocks. Both are features I appreciate on my river runners.

The Machno also does a fine job of dealing with large waves and holes. Where some boats excel at punching through, the Machno seems to glide up and over and keeps the water from ending up in your face. The rocker certainly plays its part in this but so do the wave deflectors. Located in the bow, Pyranha claims they help generate lift to get through features and help deflect spray away from the paddler.

The Machno includes an inline bow handle, which I find more comfortable for dragging and carrying along the river. The peaked decks shed water, keeping you upright and allowing quicker resurfacing after drops. A sleek, smooth feel along the cockpit means it’s easy to pull  hard fast strokes without catching any bumps or humps in the plastic. This is not something I’ve thought about before but came to appreciate while paddling the Machno. “We try to keep the cockpit as straight as possible to ensure a good seal with the skirt. The more bends the rim makes the more opportunity water has to come in,” explains Peerson.

Let’s return to our quiz. If you picked c)—and you should always pick c)—you nailed it. Although I’d still accept the other two answers because the Machno is also a fast, high performance machine that can jump over obstacles with elegance and grace. If you’re a paddler looking for a boat that can handle steeper and bigger runs or something that doesn’t punish you for little mistakes, then the Machno is your answer. 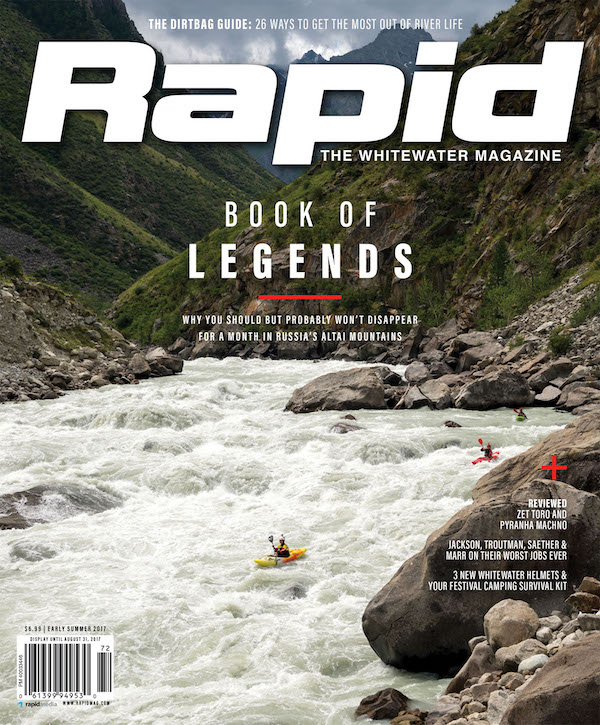