Our local nationwide Outdoor retailer just happened to have a shiny new Kevlar/carbon Bahiya we could borrow because the staff had ordered up a demo for kicks along with the shipment of better-selling P&H Quests and Capellas.

They described it as “an interesting boat,” “really playful” and “popular with the whitewater boaters,” which i took to mean people who are used to recovering from an upside down position. But it’s not as bad as that. The Bahiya is very narrow with a radical deep-V hull but has surprisingly reasonable initial stability, balancing somewhere on the continuum between tightrope walking and sitting on the couch.

Secondary stability treads a fine line between bomber and nonexistent, depending how you define the term “secondary stability.” It’s bomber in that proficient scullers can dial in any degree of tilt from zero to ears underwater and back; non-existent if you expect a boat to talk back before she bucks you off.

Solid-tracking on the level, the Bahiya puts on the turning afterburners when tilted anywhere beyond about 30 degrees to engage the chine. what you spend in bravery, she returns in manoeuvrability, but beyond 45 degrees, have a good recovery brace ready.

The sharp bow has a narrow, long entryline with concave jowls that knifes into the water and makes this boat feel fast. You’d expect a hull with this profile to be a depth finder in surf but if you lean back it won’t pitchpole. P&H designers have compensated for the needle nose and created a dry ride by flaring the hull just under the deck. this lip deflects waves and adds float.

The Bahiya is not just a novelty playboat for kayak reviewers and outdoor store staff. It is a beautiful design that offers a good compromise between manoeuvrability on edge for playful paddling and straight-tracking the rest of the time for touring.

P&H’s Bahiya is a must-try for the medium-sized, skilled paddler looking for a hard-chine, skegged kayak with decent touring capacity.

The Bahiya fills out around the midsection. The arched deck and deep-V bottom give the cockpit a roomy, barrel-chested feel. Comes standard with aluminum foot braces, recessed compass mount, moulded thigh grips, composite bulkheads, foam-padded plastic bucket seat. Under the deck, all hull fittings are glassed over. Order yours with an integrated foot pump, custom bulkhead, optional hull reinforcements and more.

Three supple rubber Kajaksport hatches are dry and easy to get on and off. Nice detail work includes a paddle shaft recess in the rear deck (useful for long-legged folks, who must exit the short cockpit bum-first), locking bar, full-length deck lines, deck bungies for stowing paddles on bow and stern, and a ratcheting backband. And yes, it’s made in the U.K.

A hard chine arcs from bow to stern like the smile that’ll be on your face if you have the confidence to engage it for a little turning action. The deep keel eats up what would otherwise be steep rocker at the stern and acts like a skeg for good tracking. 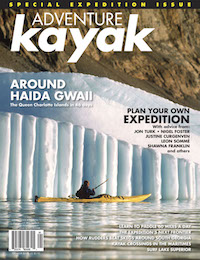