Sometimes getting on the water is a head game and we just need a kick in the ass to rethink priorities. Other times, there comes along a new boat design, like the award-winning AIRE Cub, crashing down skinny lines knocking down the barriers keeping us off the river.

New for 2020, AIRE bills the Cub as the ultimate river playboat, but I’d say it’s the ultimate get-you-on-the-river boat. Please allow me the next 1,000 words to explain. Either way, I’m pretty sure you’re going to want one.

In our fleet of soft boats here at the Paddling Magazine office, we have a 16-footer, a 16-foot cat, and one of Aire’s 14-foot D series rafts with diminished diameter bow and stern tubes to put you close to the action. We’re set up for the Canyon. We’re set up for a crew at our local Hell or High Water annual raft race. But most of the time, all this is just too much rubber rolled in the back corner of the garage.

If you’re looking at the above picture of my daughter, Kate, and me running Little Trickle on the Middle Channel of the Ottawa River and thinking, “Honey, I shrunk the raft,” you nailed it. More like, AIRE did. Rafting, now with no crew required. Solo or just one friend, or daughter, is enough. Three is almost a crowd.

The Cub is AIRE’s answer to the R1/R2 craze. Okay, maybe not a craze but we see more boats in this category of grab-and-go inflatables. And why not? The Cub is just over 10 and a half feet long and five feet, two inches across with 18-inch tubes like their popular Puma.

Our Cub shipped from AIRE with two thwarts added, sold separately. You could get away with one, but two felt perfect for seating, stuffing in feet and lashing in drybags with camera gear, extra warm duds and lunch.

The Cub is 61 pounds without thwarts and is easily rolled and tossed in the back of a pickup truck or hatchback.

Like all AIRE rafts, it has a laced-in, self-bailing floor. AIRE uses a urethane bladder system they call AIREcell with an outer 1670 base fabric Denier and a 37-ounce double lacquer gray PVC raft bottom for extra resistance to abrasion. And of course, it comes with AIRE’s 10-year, no-fault warranty. What this means is, the Cub is the same quality just in a shrunken one-to-three-person version of the other 18 rafts in AIRE’s extensive lineup.

Why not call the Cub, the Puma Kitten, I asked AIRE Marketing Director, Alexandra Aldecoa.

“We wanted a name that could relate to our popular Puma Series but hopefully, eventually, stand on its own,” Aldecoa said. “Similar to the Puma series, the Cub is ideal for a paddle team but it does have a different overall shape. The Cub design has a smaller width than the Puma and is about a foot shorter. The lower kick—bow/stern rise of seven inches—creates a longer waterline comparable to a Puma, if a similar length.”

Comparing the numbers, the Cub is a shorter boat but not necessarily slower. It crashes through waves more than riding over them. And the squared-off stern is better for R1 or stern guiding a cozy crew of two.

So how fun is it? Kate and I had our best river days in the Cub so far this season. Think old river guide and teenager crew nailing all the lines he thinks he remembers.

The Cub is so responsive and snappy fast to accelerate with just a couple of strokes. There is something about tandem teamwork and communication that makes nailing technical lines so sweetly satisfying. It is surprisingly quick. I kept getter there too early and had to learn to wait on it. And bonus fun, there’s always someone there, or almost always there, for high-fives in the eddies.

When Kate and I got to Angel’s Kiss on the Middle Channel of the Ottawa, it was running at a primo 11.5 on the gauge. We couldn’t have picked a better day for front surfing a sporty, nimble two-seater raft. Everyone in our flotilla, including the kayakers, took turns in the Cub.

We were there long enough to burn through a few drone batteries while my son, Doug, and I teamed up to carve it up. With a crew of two, we could drop in from the foam pile down then down the face. Both of us guiding and working to maintain the angle, the Cub will lock in for the sweetest front surf, ever. Sitting back of center, the bow was blasting the green water. Eventually, we got cocky and roofed it. With a few more tries, we told ourselves we could spin in there.

When I first saw the Cub at Paddlesports Retailer last summer in Oklahoma City, I thought about silky surf waves with soft piles like Angel’s Kiss. Turns out, I wasn’t the only one dreaming about the Cub.

The attending paddlesports retailers and media voted it the Best New Whitewater Boat in the 2020 Paddling Magazine New Product Showcase. It was also a favorite at the open water demo on the OKC Riversports Rapids whitewater park with industry insiders doing laps of the artificial course with giggly smiles on their sunburnt faces. 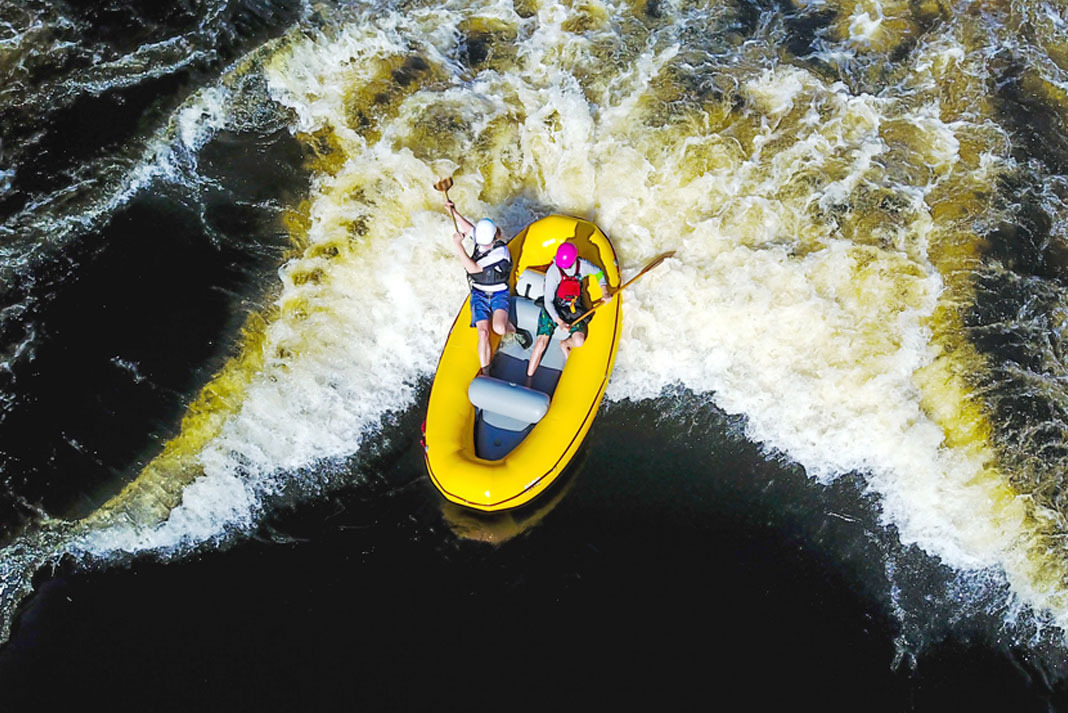 Even Carole Baskin would surf this Cub at Angel’s Kiss on the Middle of the Ottawa at a perfect 11.5 on the gauge. | Photo: Robert Faubert

“We started seeing a trend in the R1/ R2 segment of paddlers. These paddlers wanted to run more remote rivers. We wanted to make a relatively lightweight playboat so you can get it to more remote put-ins as easily as possible,” says Aldecoa. “We also realized there was a need for a smaller AIRE boat that could be more high-performance and could help people run bigger water.”

“We see higher sales in areas like the Pacific Northwest and Four Corners region where sometimes they don’t have the volume of water to run rivers year-round,” explains Aldecoa. “The Cub, made for creakier rivers, has allowed them to extend their seasons a little longer.” AIRE also sees sales in the Southeast, she figures for similar reasons.

Kate doesn’t care about industry awards. Or boney, 20-footers hidden in jungle rivers. For now, there is a whole other market for the Cub that AIRE may not have thought about.

What Kate loves is the two of us can load the AIRE Cub, carry it, and run it down anything near home. We can run stuff she’s not comfortable running yet in her kayak. We join groups of paddlers we couldn’t otherwise join. And this gets us on the river more often. 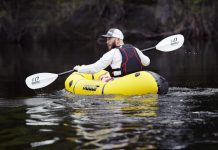 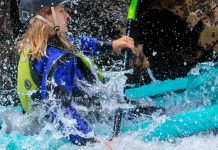 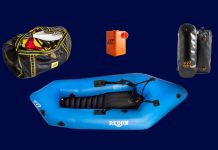 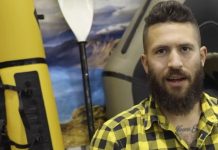 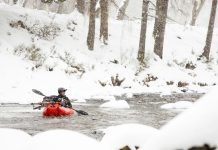