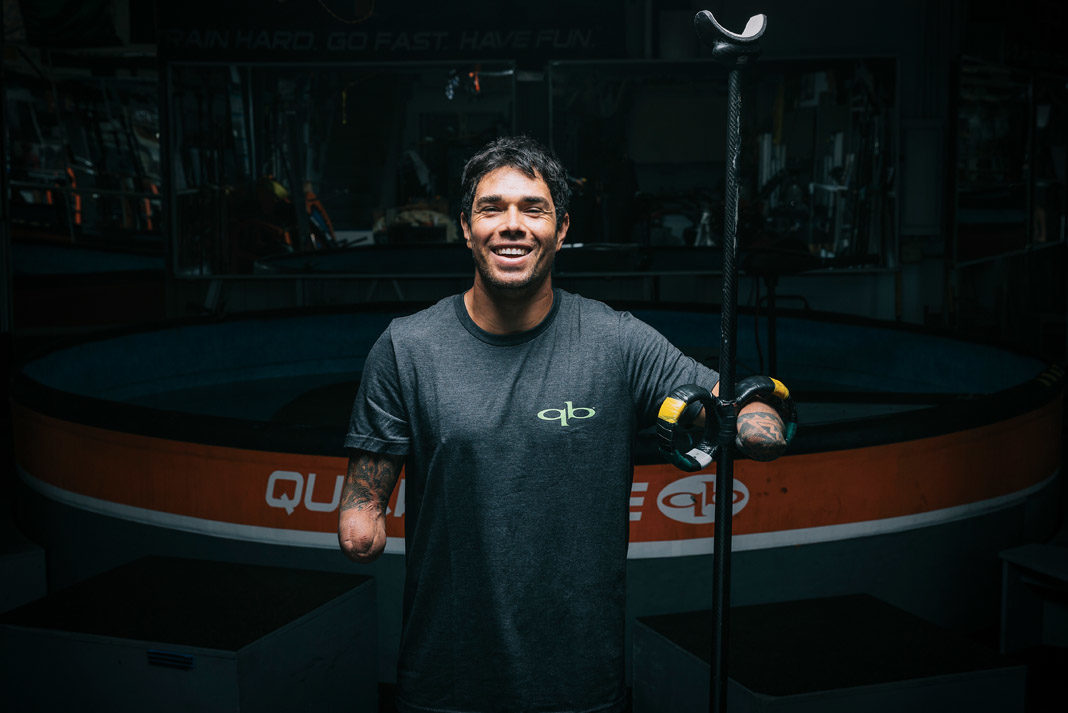 Jonas Letieri’s life changed on the most routine of days. One Sunday, while volunteering at church, the Brazilian climbed to the third floor to help install a sign when it unexpectedly made contact with the power lines above.

Letieri’s good deed resulted in 13,800 volts of electricity ripping through his body. His legs were badly burnt and both of his arms had to be amputated below the elbows. Just 26, he had to relearn every mundane task. In addition to his hands, the graphic designer had also lost his livelihood.

It is the kind of accident that could cause anyone to sink into an unshakeable depression. Yet, for Letieri, it only took three months before he started channeling his energy back into sports. “I realized I was wasting time,” he says.

Baby strides came first: cycling, swimming and competing in running events. The one thing he couldn’t do was the thing he wanted to do most—surf.

“It was really frustrating because I love the ocean—surfing was my identity,” says Letieri, who grew up catching waves alongside his dad. Balance wasn’t the issue. The problem was he couldn’t pop up. For an entire year, he tried to relearn the sport, troubleshooting with different boards. “I never made it, not even one wave,” he says.

Maybe the solution, he realized, wasn’t in the board, but in the sport.

[ Also read: How The Most Unlikely Adventurer Became One Of The Most Inspirational Athletes ]

Cue standup paddleboarding. Using a board bought with money borrowed from a friend and a modified paddle fashioned by his dad, it wasn’t long before he started entering races. He was new to the sport, but he had an advantage against his able-bodied competitors. At least that’s the way he sees it.

Since Letieri can’t rely on his hands or arms for power—a mistake many new paddlers make—he has to use proper form. “It’s about core movement. All my energy comes from my body,” he explains. “I can do the perfect stroke.”

The perfect stoke is what led him to place second at Brazil’s Battle of the Paddle in 2014, win a heat at the 2015 Payette River Games in Idaho, where he was the only competitor who remained standing in class III whitewater, cross Hawaii’s Kaiwi Channel, and paddle 220 kilometers in the Netherland’s SUP 11 City Tour in 2016.

It’s also what led to his sponsorship and a custom paddle designed by Quickblade Paddles founder Jim Terrell.

The heavy steel rings of his homemade version have been replaced by carbon fiber, while a curved butt-end allows Letieri to transfer more of his energy into the water.

Now living in California, where he works as a freelance graphic designer—another skill relearned— Letieri is preparing for his next race. He is training for the 2018 Yukon River Quest, a 715-kilometer race from Whitehorse to Dawson City.

As he trains daily with his coach, Anthony Vela, it’s not the currents or even the sheer physical exertion of the task that worries him. He predicts his biggest challenge in the sleepless wilderness race will be the mental aspect. It’s here Letieri arguably has the advantage—he’s no stranger to the mindset needed to overcome massive obstacles and succeed.

“Every painful day I think about my goals, my friends and my family. I try to use everything and make it become energy to move forward,” he says. “We always think we are weak or we are slow. But we can always go faster, longer and farther. My biggest advice is to never give up. Face yourself—you have only yourself to beat.”