Exposed to pounding Pacific swell, wreathed in swift currents and far from manicured mainland highways, Vancouver Island’s rugged coast and rough roads have an insatiable appetite for composites. Spend enough time here, and odds are good that you and your kayak will eventually require the services of Campbell Black, owner of Blackline Marine.

Campbell is a master of composite construction and repairs. Formerly a partner in Current Designs Kayaks, it was Campbell who developed CD’s layups and figured out methods for production. In his head and capable hands resides a staggering wealth of expertise gathered over more than three decades of working with complex combinations of fibers and resins. He is a skilled communicator, a naturally gifted teacher and a genuinely nice man.

And yet, I experience a certain level of anxiety whenever I hear his voice.

My Pavlovian stress response triggers to Campbell because I typically only call him when I’ve done something really destructive to my boat. Etched indelibly in my primitive brain is the following formula: Campbell = smashed kayak.

Ours is a little like the relationship between a recovering heart-attack patient and his ace thoracic surgeon—I like and respect the man, but to be honest, I also sincerely hope that I’ll never need his services again. If waiting at a kayak factory to pick up your new boat is like pacing outside the maternity ward awaiting your baby’s arrival (nerve-wracking but joyful), then a trip to Blackline is akin to a visit to the trauma unit with your injured child (OMFG).

Housed at Canoe Cove Marina, 20 miles north of Victoria, Campbell’s facility is a collection of tidy workshops—each outfitted for a specific aspect of yacht repair. Big boats represent the vast majority of Blackline’s business, but tucked in amongst the behemoths, battered kayaks convalesce in fabric cradles like wounded soldiers on gurneys. some of Campbell’s patients are just here for minor scratches and a buff—more spa treatment than serious medical intervention. But others are close to flatlining.

He’s even worked with a paddler who forgot to tie his boat down altogether before hitting the highway.

Sure, for minor scrapes and dings you can conceal your carelessness with home surgery. But when you need a real medical professional—whether it’s for a routine rear hatch exam or seri- ous trauma triage—Blackline is the Island’s best medicine.

Alex Matthews swears he’s never lost a boat off of his roof rack. Other paddlers’ cars, yes, but not his own. 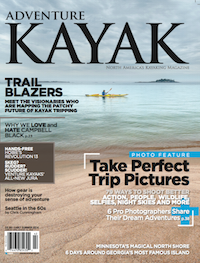 This article was originally published in Adventure Kayak,Early Summer 2014, or download our free iPad/iPhone/iPod Touch App or Android App to view the issue on your tablet or smartphone.